This is my second visit to Norway, the first time was years ago and only to Oslo.  My father and I wanted to see the Northern Lights as well as some of the Norwegian coastline.  We went with the Hurtigruten which is a no-frills ship that provides transportation of people and supplies up and down the western and northern Norwegian coast.  Unlike traditional leisure cruises, there are no big amenities or restaurant choices on board.  The cabins (other than the suites) are quite basic with private bathroom facilities and twin beds, one of which can be turned into a sofa.  Some cabins also have upper and lower berths.  But having said that, it is a great way to see the small towns dotted along the coastline as well as visit the Fjords when the weather allows it.  We went in the late fall/early winter so we didn’t get to go inside the fjords but instead we got to see the Northern Lights.  A lot of time was spent at sea with beautiful views of the coastline.

We boarded the ship in Bergen which was founded in 1070 AD and is famous for its Bryggen area of colorful wharfs.  Bryggen (Norwegian for the Wharf) is a series of Hanseatic commercial buildings lining the eastern side of the fjord coming into Bergen.  These wooden buildings today house museums, shops, and restaurants.  Bryggen has been a UNESCO World Heritage Site since 1979.

Because the Hurtigruten is a daily passenger and freight ship, it makes a series of stops along the coast even through the night.  The next port we got off for an excursion was Alesund.  Alesund is a town renowned for its Art Nouveau architecture.  In 1904, a large fire burned most of the city to the ground, following which the entire town was rebuilt in the fashionable style of the time, Art Nouveau. We joined the city walk excursion to get a closer look, passing the fishing port of Brosundet, Apotekertorget square, etc.

The next interesting stop was Trondheim which is a medieval city founded by the Viking King Olav Tryggvason in 997 AD.  We took a city tour and visited the Nidaros Cathedral which is Norway’s only Gothic style cathedral.

In the afternoon, the ship set sail towards Rorvik passing the beautiful Kjeungskjær Lighthouse.  This little red lighthouse perched on a tiny skerry off Orlandet was built in 1880 to help fishermen stay on course as they approach the point where the Trondheim Fjord meets the North Sea.  The last permanent lighthouse keeper left Kjeungskjær in 1987, when it was automated. 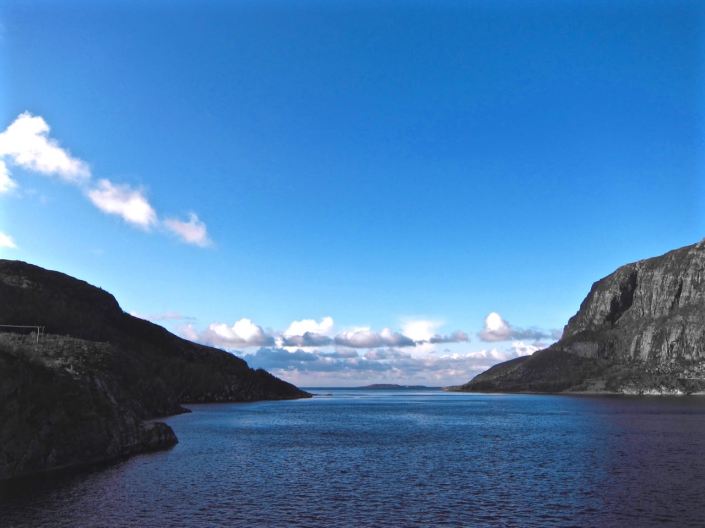 An invisible line, the Arctic Circle splits Norway in two at 66° 33’.  Above the line, you can see the sun 24 hours a day throughout the summer and the Northern Lights in the winter.

The first city we arrived after crossing the Arctic Circle was Bodo and we disembarked for an excursion to Saltstraumen in our rubber boats.  Saltstraumen has the strongest tidal current in the world.  Up to 400,000,000 cubic metres of seawater forces its way through a 3km long and 150m wide strait every six hours, with water speeds reaching 41km/hour.  Vortices known as maelstroms up to 10m in diameter and 5m in depth are formed when the current is at its strongest.  This area is also filled with migratory birds.

The evening after our adventurous trip to the maelstrom, we sailed through Raftsund and into the narrow Trollfjord.  The captain demonstrated his excellent skills by doing a three-point-turn inside the narrow fjord before sailing out again.

We ended our cruise in Tromso although the ship continues all the way north to Kirkenes.  Tromso is the largest town inside the Arctic Circle and is usually the starting point for many Arctic expditions.  This is where you may see the Northern Lights in the winter months.  These bright dancing lights are actually collisions between electrically charged particles from the sun that enter the earth’s atmosphere.  They come in all colors although pale green and pink are the most common and in all shapes from patches to streamers, rippling curtains, arcs, etc.

In Tromso, we joined Kjetil Skogli’s Chasing the Northern Lights tour where he drove us all the way to the border of Finland in search of the northern lights.  Kjetil was the guide from the BBC TV show “Joanna Lumley – In the Land of the Northern Lights”.  It was still quite early in the season when we visited so we needed to go as far away as possible from the city lights and clouds, in order to see the aurora borealis.  We were lucky that we were able to see it on the side of the road near Finland.  It was very cold in the middle of the night and even with the thermal suits and hot coffee Kjetil provided, I was still freezing.  If you are planning to see the Northern Lights, go in the winter and on new moon nights with clear skies, and also allot at least several days to chase the ellusive aurora borealis. 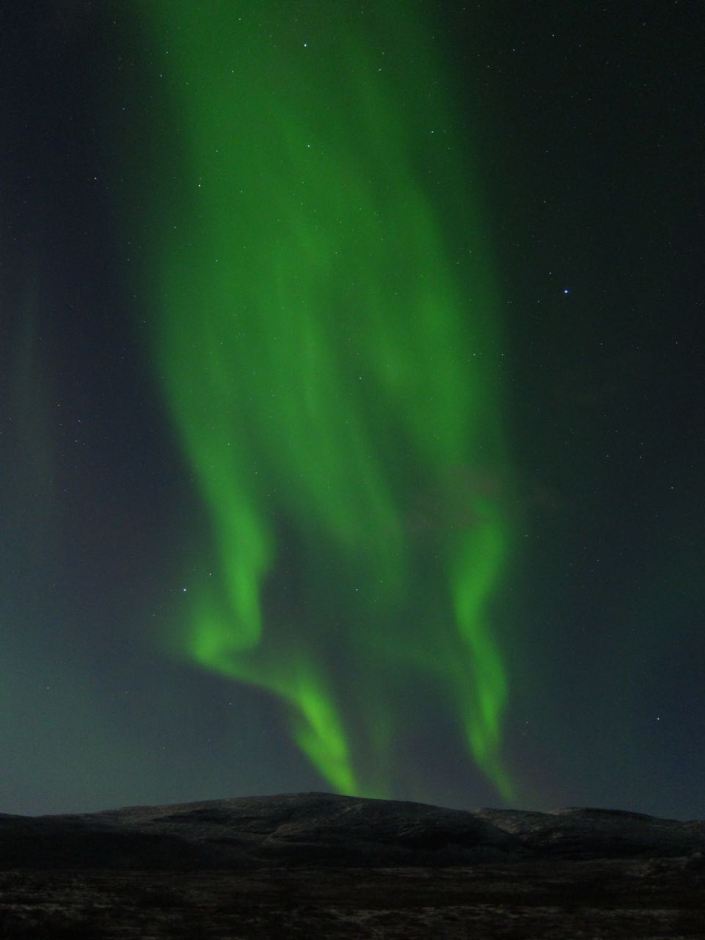 3 thoughts on “Hurtigruten from Bergen to Tromso Oct 2011”