Cappadocia is a historical region in Central Anatolia of Turkey.  Ancient volcanic eruptions covered this region with thick ash which solidified into a soft rock.  These volcanic rocks in the area eroded over time by wind and water into hundreds of pillars and minarets called fairy chimneys, some up to 40 meters high.  People of the region carved out houses, churches, and monasteries from these soft volcanic rocks.  They even dug out underground cities where a few thousand of people could live there at once to escape bandits or religious persecution.

The closest airports to Cappadocia are in Kayseri and Nevsehir.  We stayed at the Museum Hotel which is the only Relais & Chateaux property in Turkey.  The hotel was meticulously restored and renovated from caves and ruins and decorated with valuable antiques and artifacts.

Goreme Open Air Museum is a must for all visitors.  It contains the finest rock-cut churches and most of the churches and chapels here belong to the 10th to 12th centuries with beautiful Byzantine frescoes.  Goreme was a religious refuge during the early days of Christianity and hence the large concentration of churches ad monastic communities.

Pasabag Valley or Monks Valley contains some of the most striking fairy chimneys in Cappadocia with twin and even triple rock caps.  Hermits used to come to this area and build dwellings in these mushroom-shaped fairy chimneys.

We went for an easy 3.5km hike in Rose Valley.  This beautiful valley gets its name from the rose-colored rock that varies in hue and intensity depending on time of day and seasons.  There are several cave churches and houses along the way.

One of the more interesting place we visited on this trip was the Underground City of Kaymakli.  It is one of the largest and widest underground cities in Cappadocia with eight floors below ground organized around ventilation shafts.  The city consisted of stables, churches, storage places, wineries, and rooms where people lived.  Archaeologists speculate that up to 3500 people could have lived there at once.  It was built to protect locals from marauding armies and invaders as well as religious persecution.  Currently, only four of the eight floors are open to the public.

Located near the village of Mustafapasa is Keslik Monastery which dates from approximately the 7th century.  The monastery complex consists of churches, kitchens, sleeping quarters, and even graves, that were carved into the rocks by the monks.  Unlike many other remote churches and monasteries, the frescoes of Keslik Monastery are remarkably visible.

Love Valley is an area in Cappadocia filled with huge phallic shaped pillars that are naturally formed by the erosion of volcanic rock.  Erosion from the wind and water left only the harder elements behind, hence forming such an unusual landscape.  We did an early morning hike through the valley with the owner of the Museum Hotel and his dog Joe. 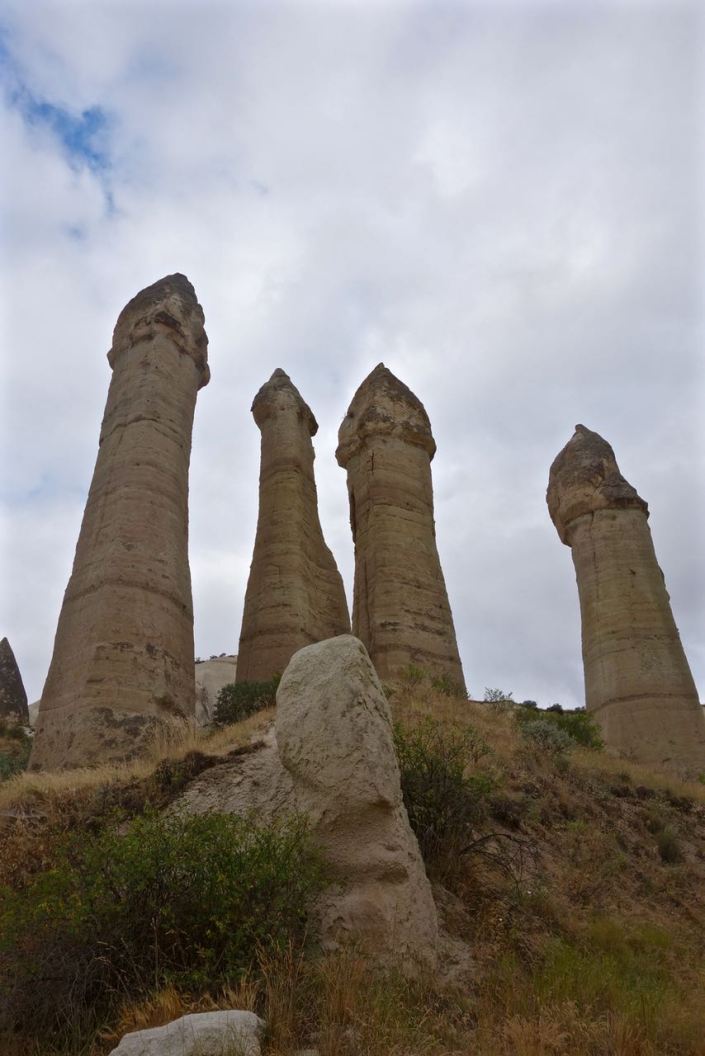 Do visit the Sarihan Caravanserai and see a Whirling Dervishes Ceremony. The ceremony symbolizes the different meanings of a mystic cycle to perfection where the dervish spins round and round with his arms open.  Unfortunately, photos were not allowed during the ceremony.