Leaving the Ajanta and Ellora Caves, we flew to Chennai as we continued our journey in South India.  Chennai is perfect as a base to explore the neighboring sites namely, Kanchipuram and Mamallapuram.  We stayed at the Park Hyatt Chennai for the next several days.  Again, like the Four Seasons in Mumbai, the Park Hyatt here is not a “real” Park Hyatt.  Rooms are nice enough but the lobby, service, etc are not that of a Park Hyatt I am accustomed to.

Chennai, formerly known as Madras, is one of the main gateways to South India.  It is heavily influenced by colonialism as Madras was founded in 1639 when the British East India Company was granted land to build a trading settlement.  Fort St George was built as the British East India Company’s fortified foothold in Madras and now is the legislative and administrative seat of the state.  The fort was completed on St George’s day on 23 April 1640 and hence named after the patron saint.  There isn’t much left to see inside the fort other than St. Mary’s Church and a small Fort Museum.

Also in the Mylapore district, is the Kapaleeswarar Temple which is a large Hindu temple devoted to Lord Shiva.  The name Mylapore or Peacock City is derived from the legend where Pavarti seeked penance as a peacock in one of her incarnations before rejoining Shiva in heaven.  The Kapaleeswarar temple is of typical Dravidian architectural style, with the gopuram which is an ornate monumental tower at the entrance, overpowering the street on which the temple sits. 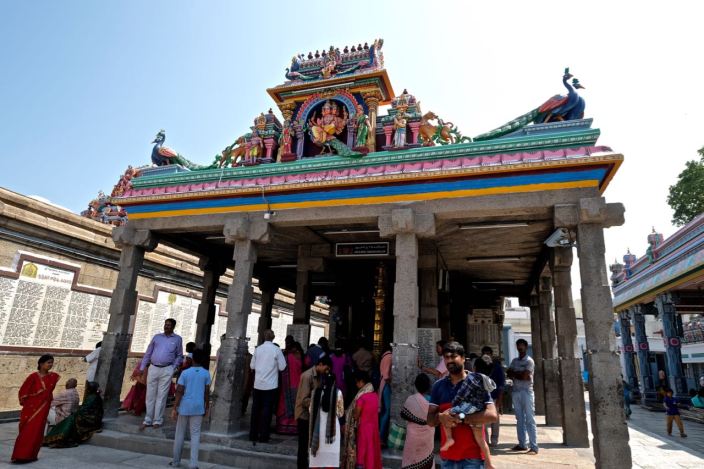 After this short visit in Chennai, together with some shopping, we headed to Mamallapuram which was the major seaport of the ancient Pallava Kingdom.  Stay tuned!