Chengdu is the capital of China’s Sichuan province and is one of the only major places that has maintained its name nearly unchanged and its location from imperial to communist eras.  Chengdu served as capital to Liu Bei’s Shu during the Three Kingdoms Era (220-280 AD).  Nowadays, it is famed for being the home of the giant pandas and wonderful spicy food.  Chengdu also serves as a great base to visit nearby sites such as LeShan Giant Buddha and Sanxingdui archaeological site.  We stayed at The Temple House hotel in central Chengdu for the next 6 days.  This first post will cover the places we visited within the city of Chengdu.

Qingyang Palace 青羊宫 is a Taoist temple where the most integrated collection of the study of Taoism, Dao Zang Ji Yao, is stored.  Qingyang Palace dates back to the Zhou Dynasty (1046-256 BC) where the founder of Taoism, Laozi, expounded the texts of Tao Te Ching to an official Guan Yin.  The palace was first built during the Tang Dynasty (618-907) over a thousand years ago and what we see today is mostly built during the Qing Dynasty (1644-1911).  The structure is made up of six main buildings: the Front Gate, Hunyuan Hall, Hall of Three Purities or Sanqing Hall, Hall of Goddess Doumu, Hall of Jade Emperor, and Hall of Tang Emperors.  One can see clearly the Taoist style of architecture with glazed tiled roofs, animal carvings decorating the pillars, and the Ying Yang symbol.  You will notice that all visitors will rub the pair of bronze goat sculptures placed in front of Sanqing Hall.  The goat on the left is actually a mythical creature which combines the features of the 12 animal signs of the Chinese zodiac.  It has a mouse’s ears, an ox’s nose, a tiger’s claws, a rabbit’s mouth, a dragon’s horn, a snake’s tail, a horse’s face, a goat’s beard, a chicken’s eyes, a dog’s belly, and a pig’s thighs.  Legend has it that these two bronze goats were incarnates of two servants of the Pure Emperor and that they could cure all diseases.  It is believed that touching a certain part of the goat will release pain and disease from that equivalent part on the human body.

Wuhou Memorial Temple 武侯祠 is dedicated to Zhuge Liang, the Marquis Wu of Kingdom of Shu in the Three Kingdoms Period (220-280).  He is one of China’s famous historic figures and was the renowned minister and military strategist for Emperor Liu Bei.  Of main interest here is the Triple-Success Stele set up in 809.  It is so called because the text was written by Pei Du who served four emperors in succession during the Tang Dynasty, then stylized by Liu Gongquan, one of the most brilliant calligraphers in Chinese history, and then carved by a noted engraver Lu Jian.  The text is mainly about the morality and achievements of Zhuge Liang.  It is rare to have a temple with halls dedicated to both the emperor and his minister in the same complex.  This demonstrates how important Zhuge Liang is to the people of this former capital. 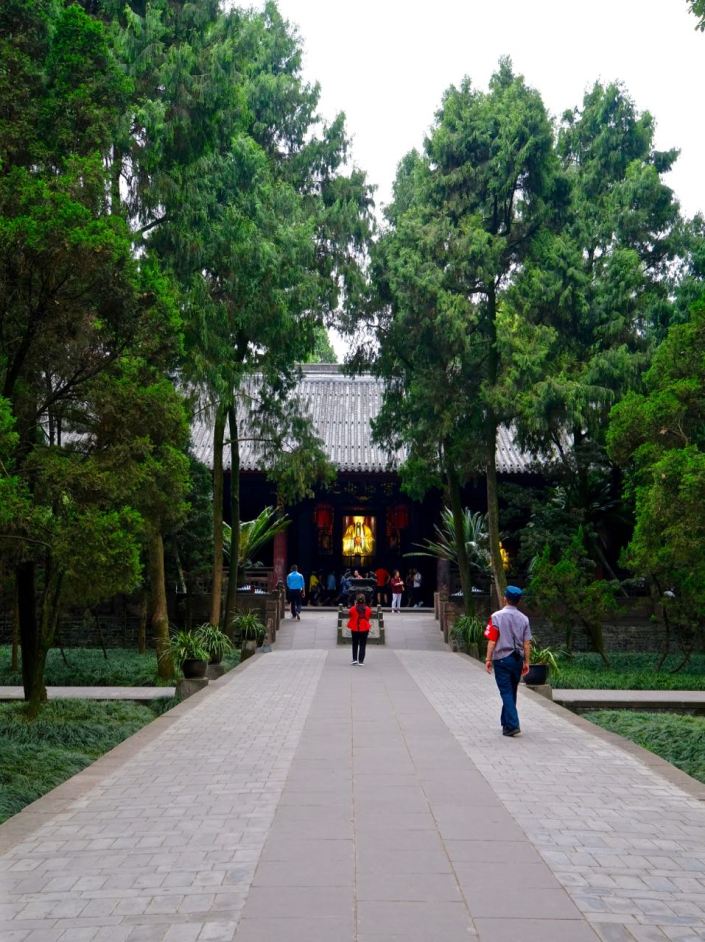 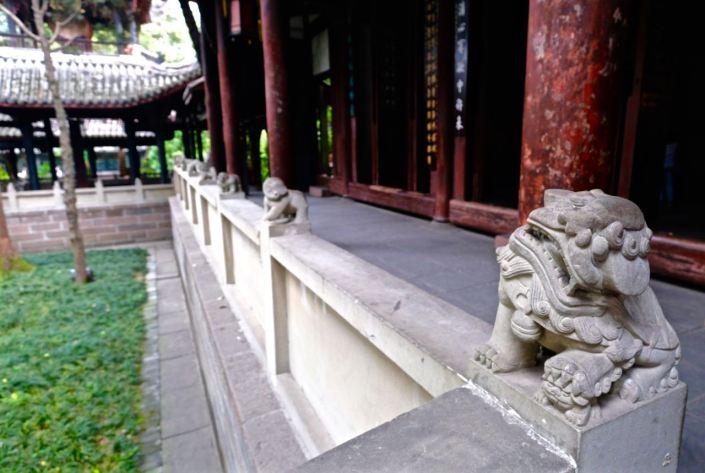 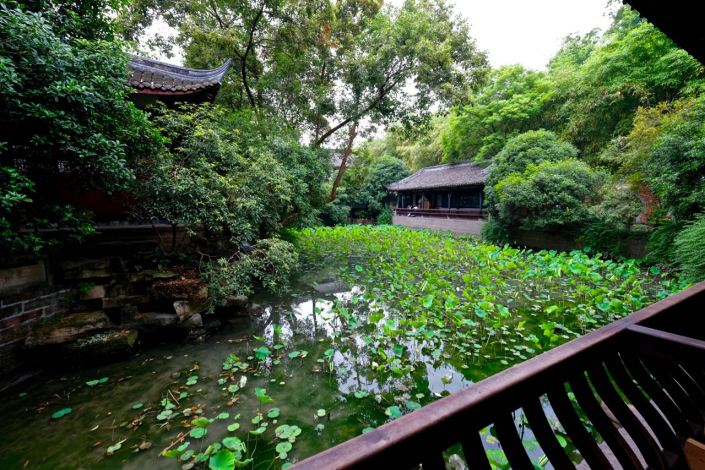 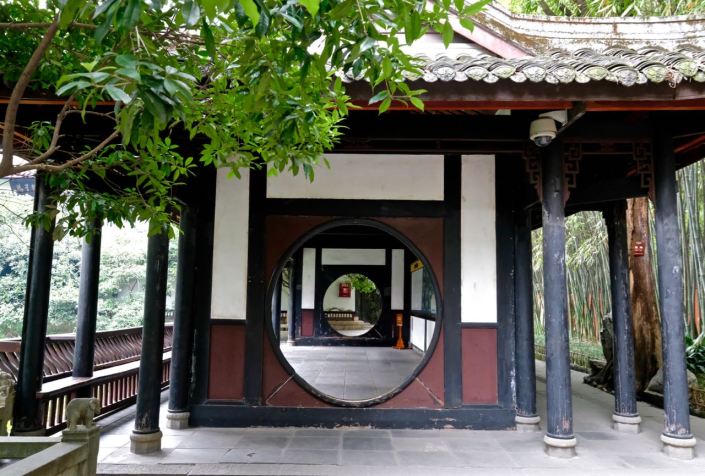 We exited the back of Wuhou Temple onto Jinli Pedestrian Street 锦里古街 dating back to the Three Kingdoms Period over 1,800 years ago.  It is also known as the “First Street of the Shu Kingdom” between 221-263 BC.  The street is paved with green flagstones and the buildings along this street has been restored and were modeled on the architectural style of a traditional old town in western Sichuan Province from the Qing Dynasty.  There are many tea houses, handicraft shops, and restaurants here.  Most of the shops are a bit touristy but it is interesting to see Shu Embroidery, lacquerwares and other curios.  There are also many street stalls selling a variety of local street foods. 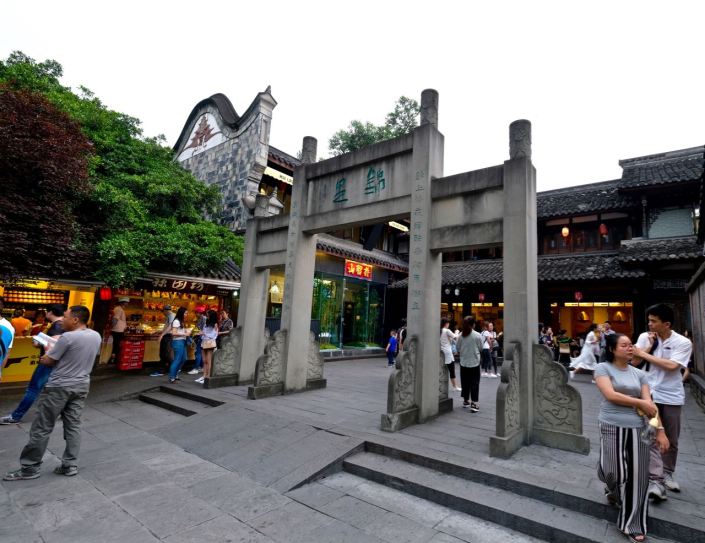 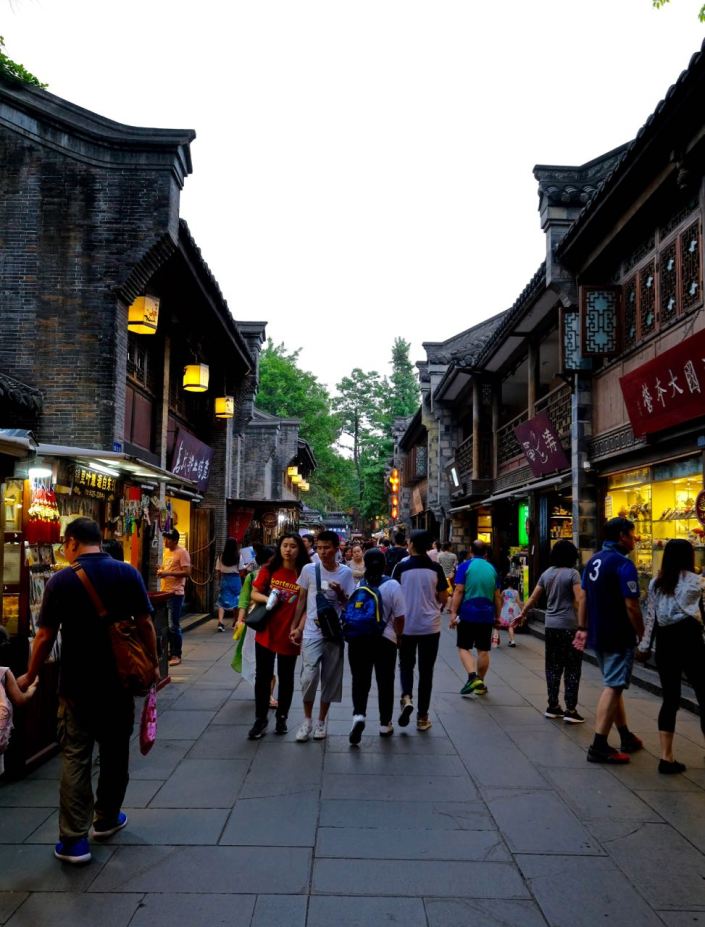 Other popular pedestrian streets are the Kuanzhai Ancient Streets 宽窄巷子 or Wide and Narrow Alley of Qing Dynasty (1644-1911).  This is a microcosm of Chengdu’s history and culture, and like Jinli Street, it is a popular tourist street with many restaurants, teahouses, and shops selling souvenirs.  Kuanzhai Ancient Streets is made of three parallel streets and are very well restored from 2005-2008 preserving old trees and old buildings giving you the feel of how it was in the past. 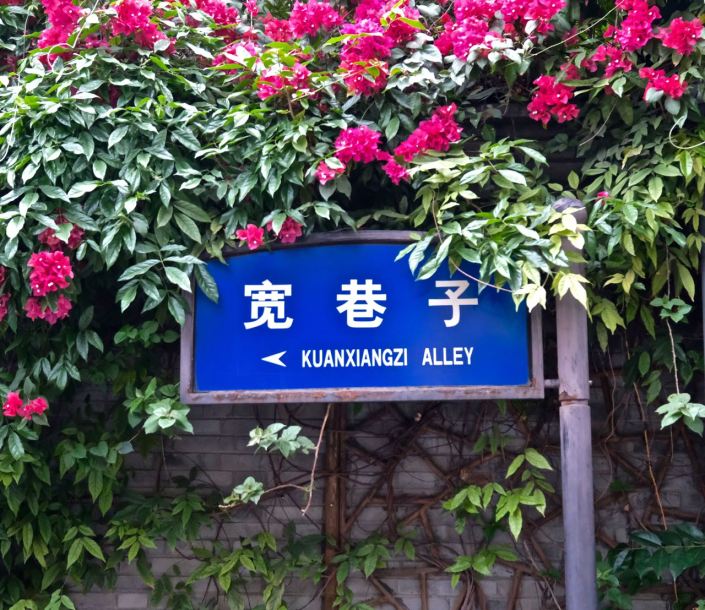 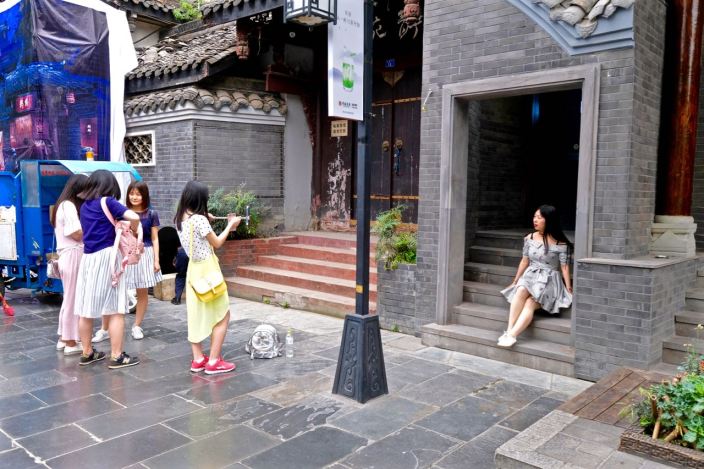 There are many performance halls and restaurants with traditional Face Changing or Bian Lian shows which is an ancient Chinese dramatic art that is part of the Sichuan Opera.  Performers wear colorful masks which they change from one face to another almost instantaneously with a movement of the head or a wave of the hand.  This art form began about 300 years ago during the reign of Emperor Qianlong (1736-1795).  The secret of this art is passed down from generation to generation within families and most usually only passed onto males of the families.  Apparently, skilled actors can change about 10 masks in 20 seconds and wear up to 24 masks at the same time.  We had the opportunity to see a variety of traditional performances while enjoying our tea at one of these halls. 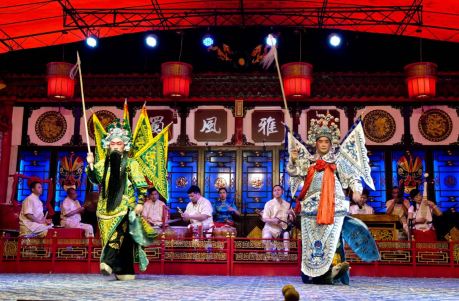 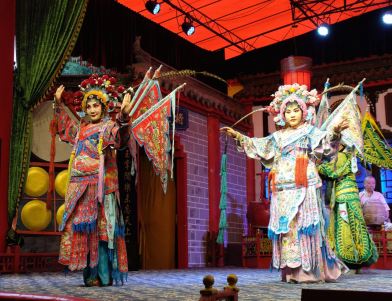 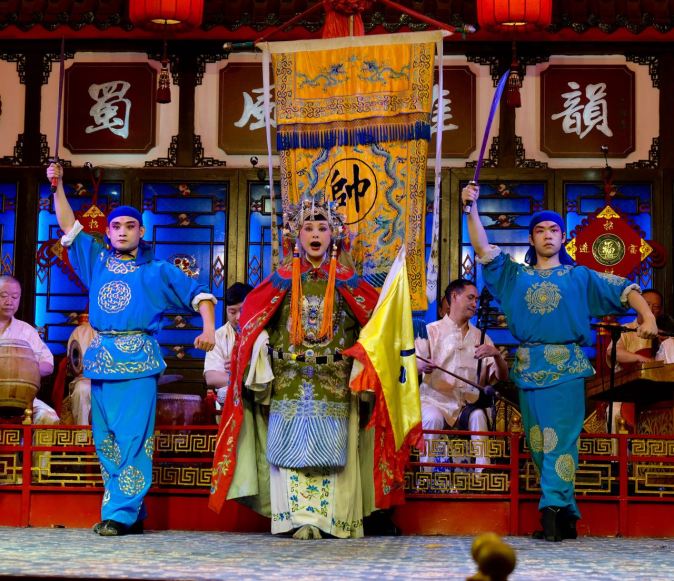 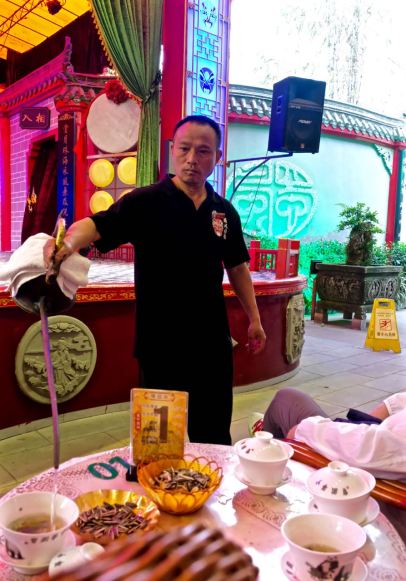 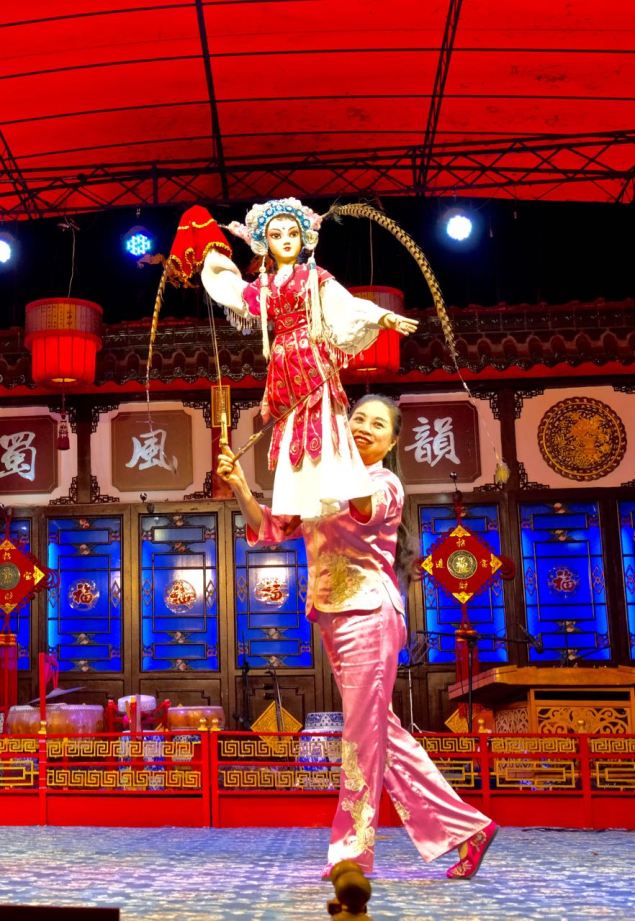 Chengdu is a large city and there are many more sites which we did not have time to visit.  Next post will be about one of the highlights of our trip which is the Giant Pandas of Sichuan.  Stay tuned!