Driving in Iceland is relatively stress free and there is only one main ring road going around the island with little traffic.  There are clear signs to all the main sights along the road.  We rented a 4×4 (actually a normal car would suffice during the summer months especially if you are not planning to go off-road) for our two day drive along the southern coast of Iceland passing waterfalls, small villages, black sand beaches, glaciers, and lava fields.

After driving for about 90 minutes from Reykjavik, we arrived at Seljalandsfoss Waterfall.  This waterfall rises some 200 feet and has its origin in the volcano glacier Eyjafjallajökll.  You can walk behind this waterfall into a small cave but be prepared to be completely drenched. 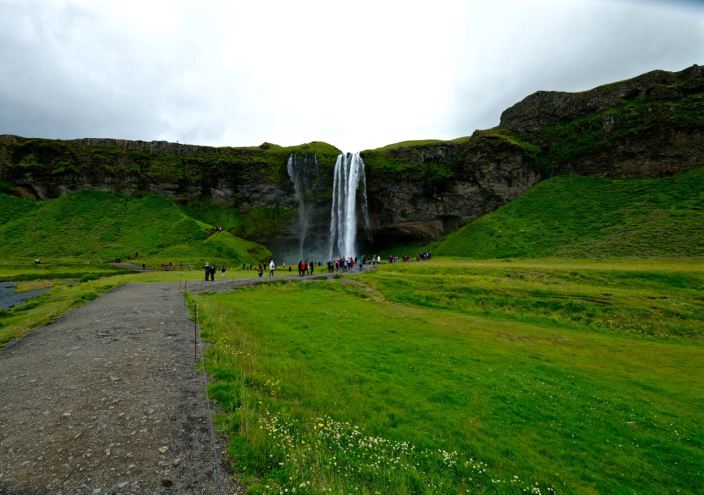 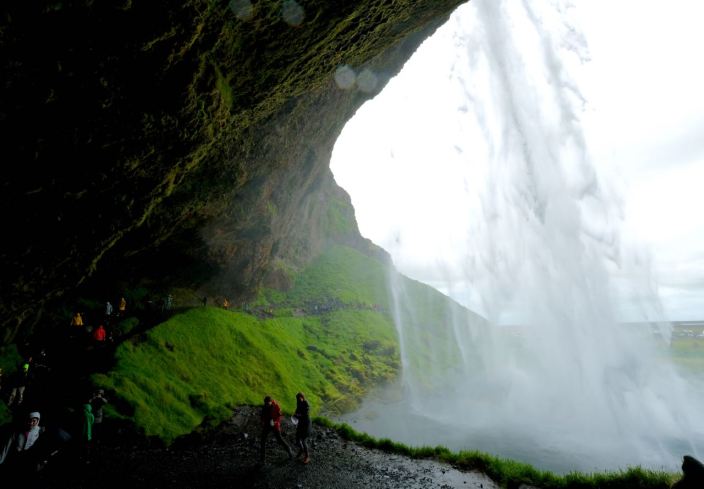 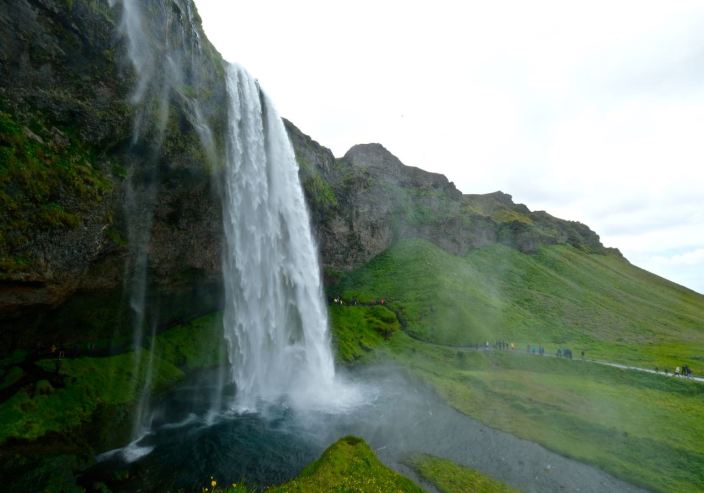 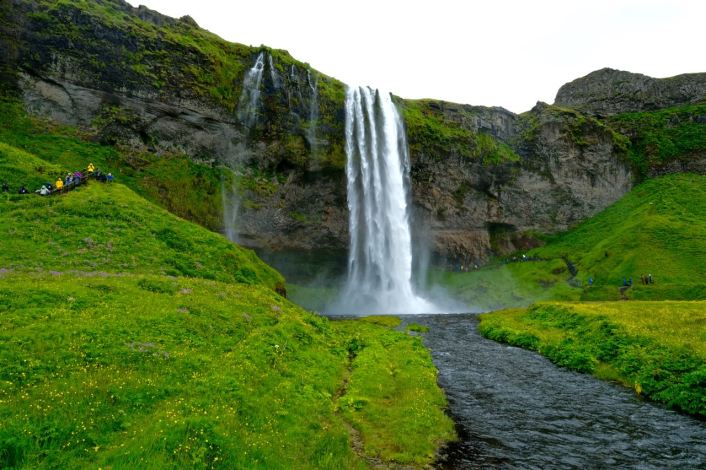 Not far away is the Skógafoss Waterfall which is another beautiful and large waterfall, much wider and more powerful than Seljalandsfoss.  There is a viewing platform on top accessed by a wooden staircase of about 500 or so steps.  Apparently, there is always rainbows here on sunny days.  You may recognize Skógafoss from the movie Thor 2: the Dark World.

Next to the Skógafoss Waterfall, there is a museum called Skógar Folk Museum which preserved several old farmhouses, equipment, handicrafts, and manuscripts etc.  You can see a few Icelandic turf houses here.  This is a window into how Icelanders lived in the past.  Interesting quick stop here with a cafe offering soup and simple sandwiches. 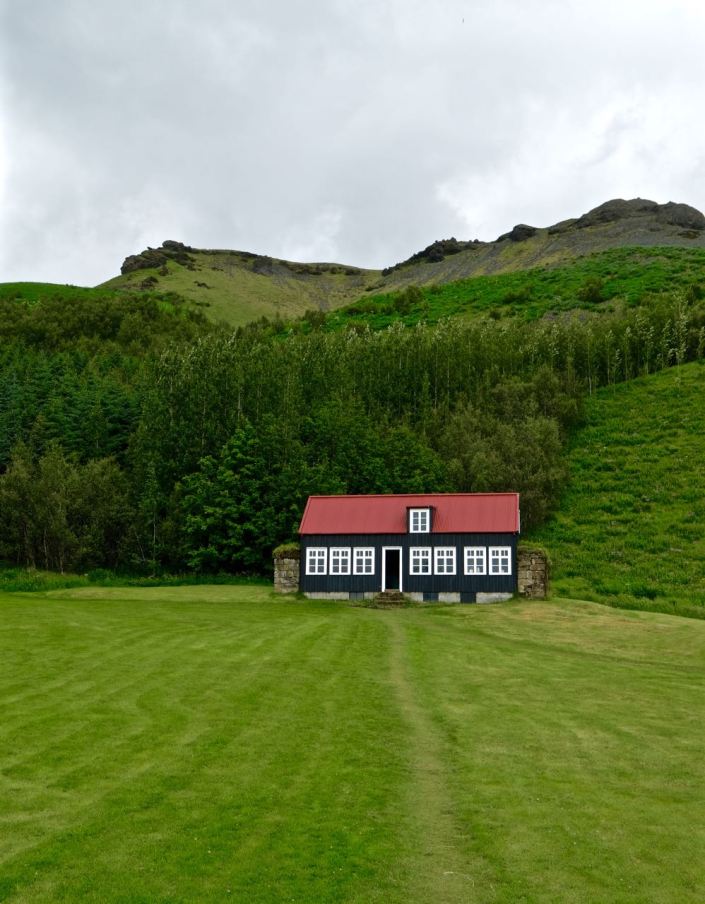 Before arriving the town of Vik, we drove up a steep hill to get to the top of Dyrhólaey.  Dyrhólaey is a small peninsula with a massive black arch of lava that the sea has eroded from the headland.  Dyrhólaey literally translates to “the hill island with the door hole” and you can walk the 120 meter high arch which is totally nerve wrecking.  From the top of Dyrhólaey, the views are spectacular.  To the north is the Myradalsjökull glacier and to the east is the sea stacks of Reynisdrangar and to the west the whole black coastline is visible.  There is also a large castle shaped lighthouse here which has been renovated into a boutique hotel with the guiding lights on the top still in operation and controlled from Reykjavik. 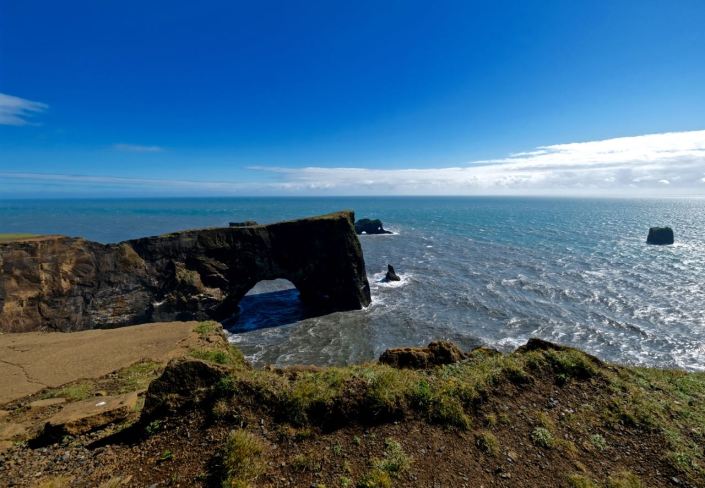 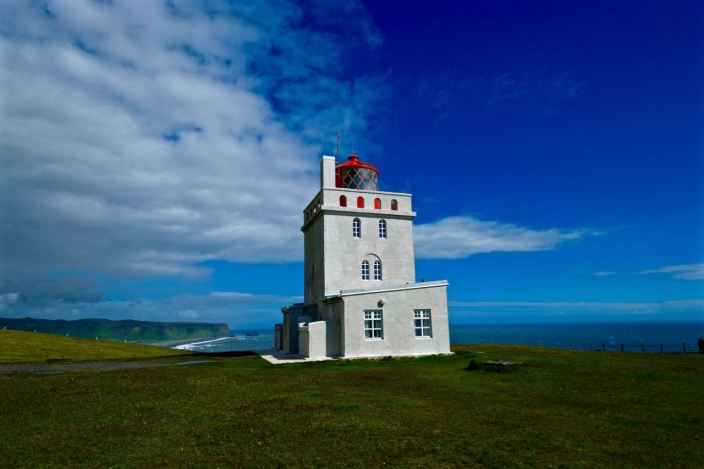 Vik is the southernmost village of Iceland.  It lies directly south of the Myrdalsjokull glacier on top of the Katia volcano.  Katia has been dormant since 1918 which scientists believe is longer than normal and an eruption may occur soon causing flash floods that could destroy the whole town.

Most people come to Vik to see the Reynisfjara Black Sand Beach, one of the most beautiful non-tropical beaches in the world.  The black sand is remnant of the basalt lava and together with the crashing waves make this place both wild and majestic.   There are three sea stacks called Reynisdrangar where legend has it that two trolls tried unsuccessfully to drag a three-masted ship to land and when daylight broke they turned into rocks.  You will come to notice that Icelanders talk a lot about elves, trolls, and other supernatural beings.  There is even an Elf School where people are taught about elves and other hidden beings.  According to Icelandic lore, these beings inhabit a parallel world that is invisible to us unless they willingly reveal themselves.  The basalt columns at Reynisfjara forming a step pyramid shape called Gardar, remind me a lot of Giant’s Causeway in Northern Ireland.  It doesn’t seize to amaze me how perfect the hexagonal shapes of these columns are.  There is a cave here with the basalt columns called Halsanefshellir Cave.  There are lots of birds in the area such as puffins, fulmars, and guillemots.  This black pebble beach is one of the most memorable places on this visit. 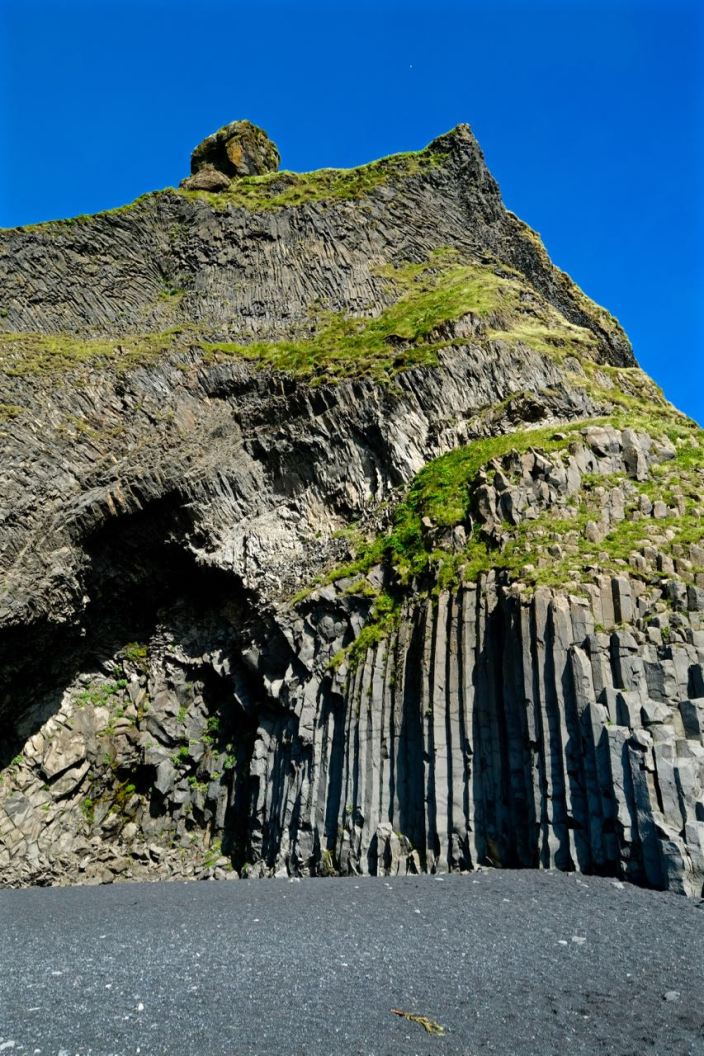 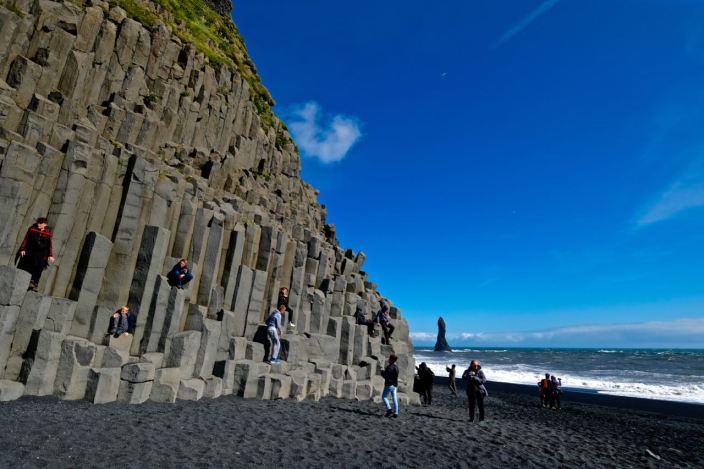 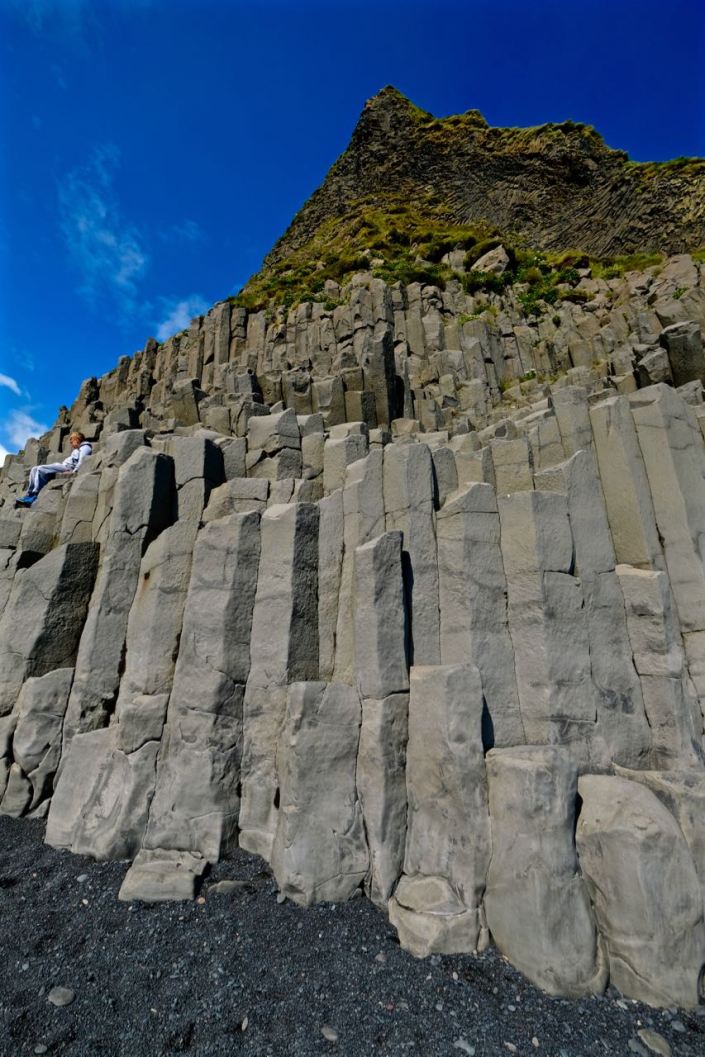 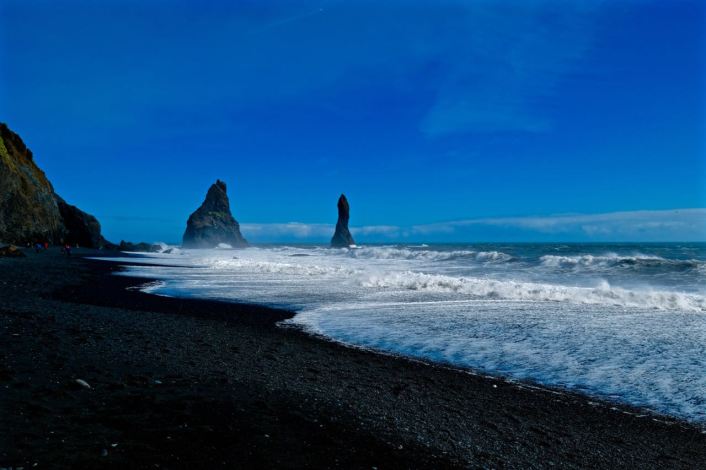 As you can see so far from my posts, Iceland is filled with waterfalls.  There are the famous ones such as Skógafoss and Gullfoss etc.  There are also many less powerful, smaller ones, all along the ring road, next to villages and small farms. 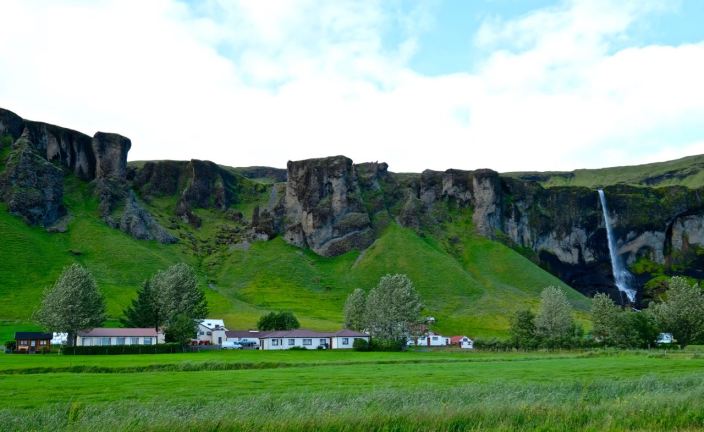 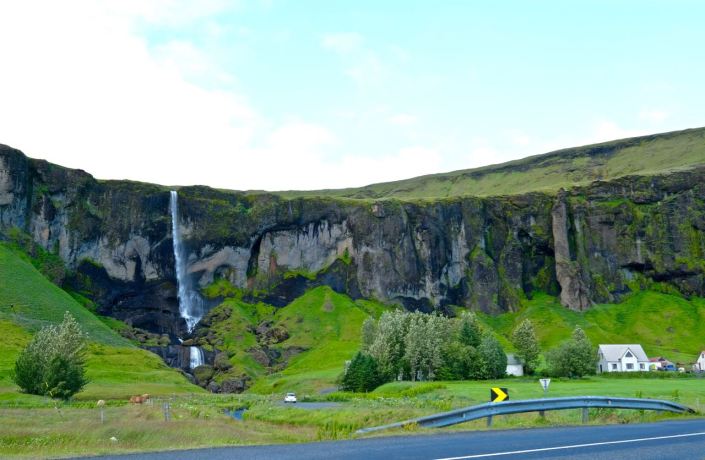 From Reynisfjara, we drove about 2 hours to arrive at our hotel, Hotel Skaftafell, about a 6-minute drive from Skaftafell National Park.  Make sure you book your accommodations well in advance because this area gets super busy and none of the hotels are very big.

To be continued in my next post… Stay tuned!