From Rwanda, we flew to Victoria Falls on the Zambezi River straddling Zambia and Zimbabwe.  This waterfall is often referred to as one of the Seven Natural Wonders of the world and is also the largest waterfall in the world.  It is a bit of a challenge getting here from Rwanda as the network of flights in Africa is still quite underdeveloped.  In order to connect on the same day, we flew from Kigali in Rwanda to Lusaka in Zambia, before connecting to Livingstone which is the town on the Zambia side of Victoria Falls.  From there we had to cross the border to the town of Victoria Falls on the Zimbabwe side.  We stayed at the grand dame Victoria Falls Hotel on the Zimbabwe side with its dramatic views of the gorges of Victoria Falls.  This hotel is one of the nicest hotels right next to the falls, and has a path that leads to the falls about 10 minutes away. 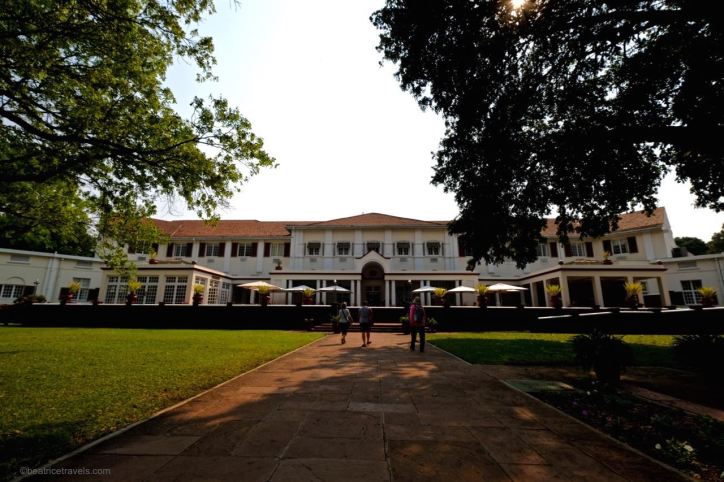 Local tribes used to call Victoria Falls “Mosi-o-Tunya” meaning “The Smoke that Thunders”.  It was discovered in 1855 by Scottish missionary and explorer David Livingstone who named the falls after Queen Victoria.  The falls are formed by the Zambezi river plummeting into a transverse chasm 1,708 meters wide.  The depth of this chasm called the First Gorge is from 80 meters at its western end to 108 meters in the center.  Gradual erosion of the basalt over time will form new waterfalls that will grow in width as the soft material gets washed away.  The falls have been receding upstream over the last 100,000 years.   The water level here varies from its peak in April at the end of the wet season to its lowest level in October.  During the wet season, it is impossible to see the foot of the falls and most of its face as it is covered in constant shower and mist.  Whereas during the dry season, most of the walls and the gorge are visible and you can descend below the falls on the Zambian side via the Boiling pot trail and partake in some rafting at the bottom of the falls.  We took a short helicopter ride from the Zimbabwe side to get a panoramic view of the falls.  Being in the air, you really get a sense of the sheer size and might of Victoria Falls. 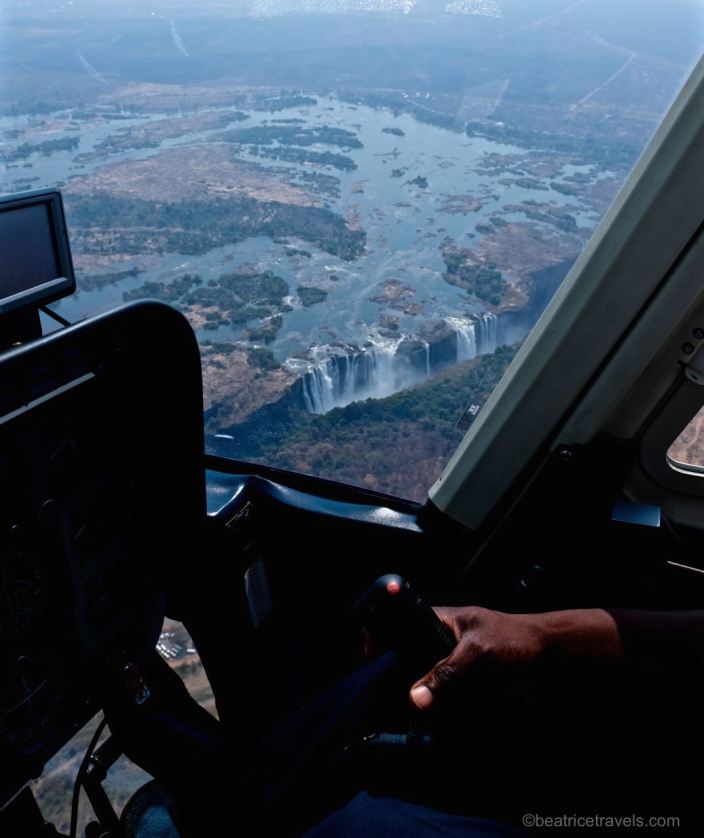 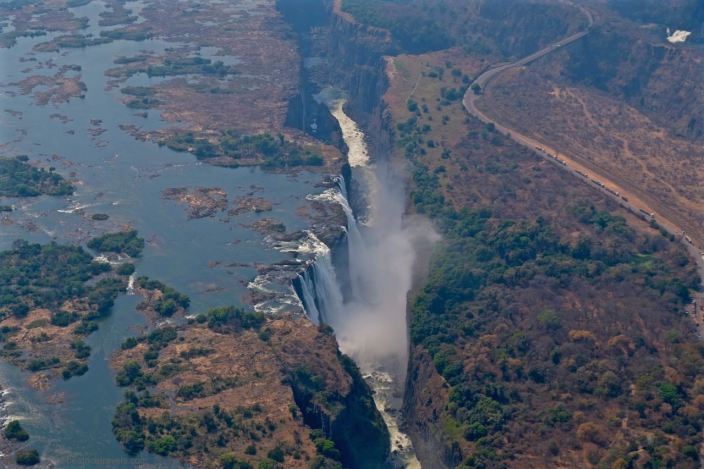 Victoria Falls can be viewed from both the Zambia and Zimbabwe sides.  It is fairly easy to cross the border.  Depending on your passport, you may have to purchase a multiple entry visa for going back and forth.  It seems to be cheaper to purchase the visa at the land border than at the airport.  If you already have a visa, you don’t have to get out of the car on the Zambia side.  The driver will take your passport and get it stamped before continuing to the Zimbabwe border post.  Here you will have to go into the office and purchase a visa (if you need one) and get your passport stamped.  Then you have to change into another taxi that operates on the Zimbabwe side.  The whole process is relatively easy.  Some tourists walk the whole way across the Victoria Falls Bridge from the Zambia side of the falls to the Zimbabwe side though it can get quite hot under the sun.  Beware to clearly negotiate the price before you get into the taxi or else they will double the price and try to convince you that you need a visa (even when you don’t) or that you didn’t purchase a double entry visa etc.  I saw some drivers take cash and go behind the office and return with passports stamped.  With rampant corruption, the officer and the driver probably pocketed the cash.

One of the best vantage points is located on a bridge called Knife Edge Bridge on the Zambian side from where you can see the eastern Cataract and the main falls.  Two thirds of Victoria Falls lie in Zimbabwe and you can get a view of the full width of the falls from this side.  However, if you want to walk down to below the falls, you can only do so from the Zambian side.  You may have seen people swimming precariously close to the edge in Devil’s pool which has a width of about 10 meters and is located next to the cliff on Livingstone Island.  One can only enter the pool during the dry months or else there is the chance you will be carried by the water into the abyss.  The waterfall is surrounded by rainforest filled with birds, huge mahogany, orchids, etc and is very pleasant for a leisurely stroll. 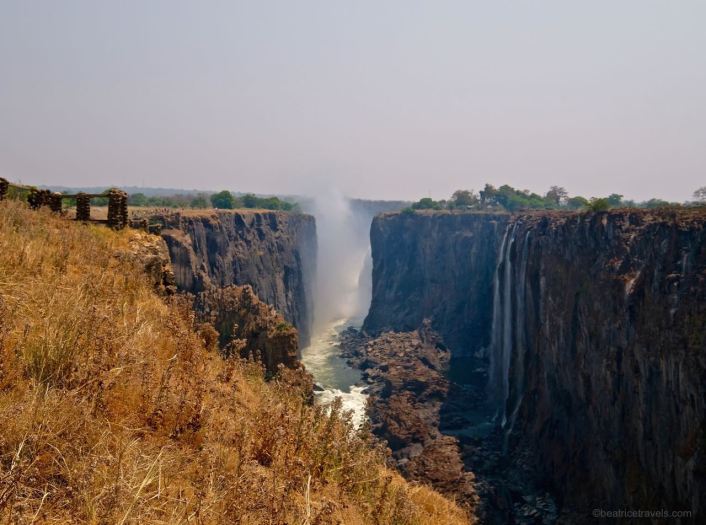 There are numerous activities offered at Victoria Falls from adrenalin seeking to leisurely ones.  Many visitors go white water rafting, zip-lining, bungee jumping as well as fishing, canoeing, and sunset cruising.  There are also many land activities such as elephant back safaris, Chobe River safaris, walks with lions etc.  We opted to visit Livingstone Island which includes the option of swimming in Devil’s Pool.  Livingstone Island is located in the middle of the Zambezi River at the edge of the lip of the Victoria Falls and is named after Dr. David Livingstone.  David Livingstone was paddled in a dugout canoe by natives through the rapids who landed him on what used to be called Goat Island, now Livingstone Island, where for the first time he saw Victoria Falls.  During high water season, this island is completely covered in the spray and downpour from the Falls.  Livingstone Island is a short 5-8 minute boat ride from the Royal Livingstone Hotel.  I was too much of a wuss to swim in Devil’s Pool which is basically the world’s ultimate infinity pool.  You can swim up to the edge and look over the Fall’s 100 meter drop.

Instead of a sunset cruise on the Zambezi, we decided to take the Bushtracks Express Steam Train for their bridge and dinner run.  All the carriages of this steam train are fully-restored and brings you to a bygone era.  The train departs from the station outside the Victoria Falls Hotel in Zimbabwe and as the train chugs away, you are served drinks and snacks.  Just before sunset, the train arrives at the Victoria Falls Bridge where you can get off and view the sun set on the bridge.  Victoria Falls Bridge was built in 1905 by Cecil Rhodes with the idea that the train should be near enough to be sprayed by the falls.  At the time of writing this steam train only runs on Tuesdays and Fridays with another one running from the Zambia side on Wednesdays and Saturdays.  So if you are not there on those days, you can still easily walk onto the bridge and view the sunset. 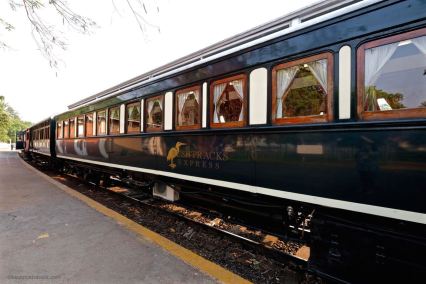 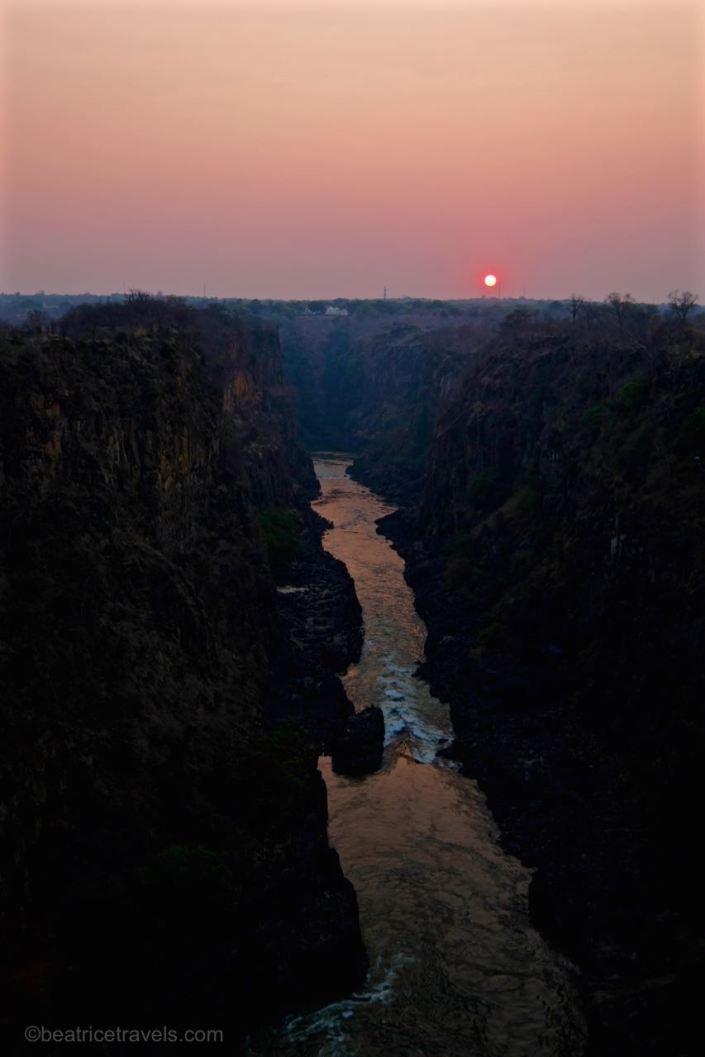 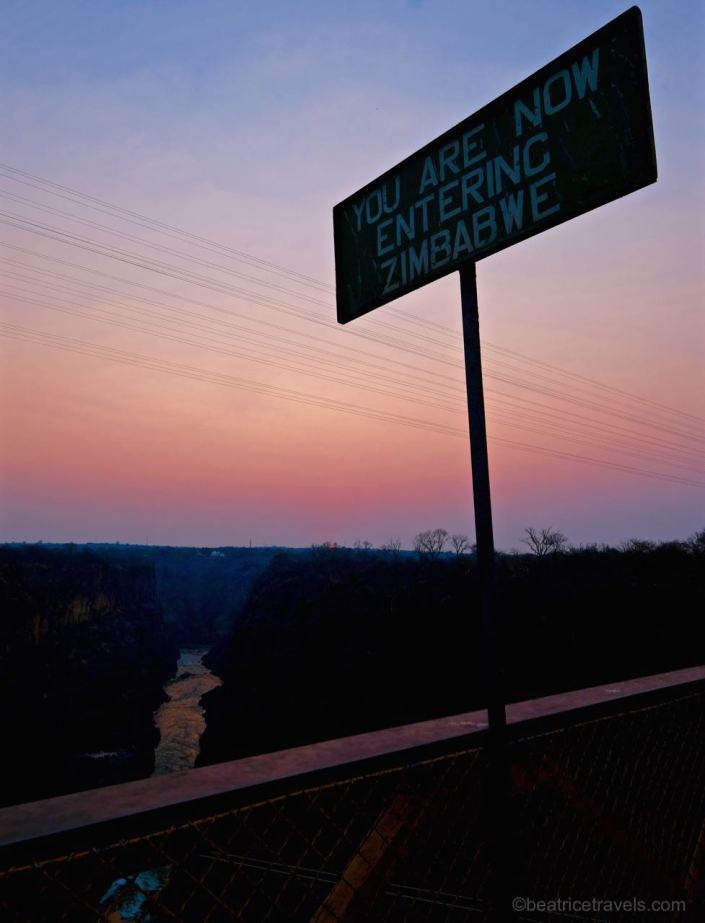 Truth be told, I was not too impressed with Victoria Falls.  Perhaps it is because I visited during the low water season.  For me, I liked Iguazu Falls in Argentina and Brazil more.  It was more interesting, more paths to explore, and more activities on offer.  Also, I didn’t like the people I came across in Zimbabwe and Zambia very much.  I just felt everyone was out to rip you off.  The hand was out expecting a tip even before you reached into your pocket.  We also had a bad experience at the Victoria Falls airport where our luggage, even though locked, got opened (pen through zipper trick) and ransacked.  They opened every single pouch I had including my toiletries kit, my medicine pouch, and even my shoe bags.  Fortunately, I had nothing of value in my luggage so nothing was taken.  But just the idea of some stranger rummaging through your things is a very unsettling feeling.  We originally thought that perhaps we will return some day to see the falls during the higher water season, but the more we thought about it, the more sure we are that we will not be returning.

From Victoria Falls, we continued our journey to Namibia.  Stayed tuned!