The long awaited trip to Bhutan has finally happened.  I have always wanted to visit this small Himalayan Buddhist nation coined the “Happiest Country on Earth”.  Unlike its south asian neighbors, Bhutan was never colonized.  It is not an easy place to get to compounded with limits set by the government as to the total number of visitors per year.  Also from what I understand, accommodation options are somewhat limited to either the ultra luxurious lodges or very basic hostels and homestays with not much in between.  Currently, you can fly to Bhutan from Bangkok, Singapore, and a few other places in India.  We flew into Paro on Drukair from Bangkok with a brief stop in Kolkata.  Apparently, Paro is one of the hardest airports in the world to land and take off and only a small number pilots are certified to land here.  The airport is surrounded by steep hills and is only operational during daylight hours because pilots must use the manual mode and hand-fly the plane through a narrow alley between the mountains to reach the airport.  One tip is if you fly Drukair, the business class is only US$50 more expensive than economy and much more comfortable. 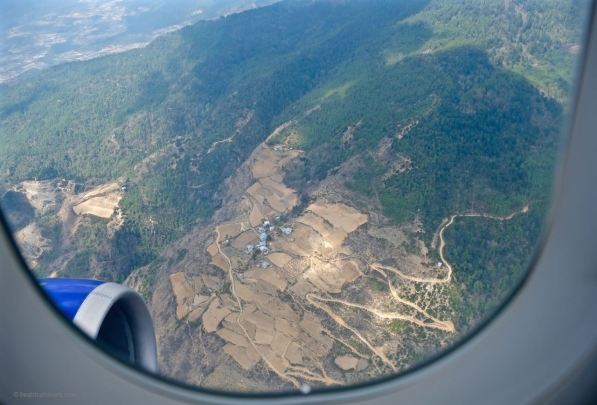 We decided to stay at the all-inclusive Amankora for our 7-night journey.  Amankora has 5 lodges spread out in the Kingdom of Bhutan but we will only have time to stay at 3 of them.  Not only is Amankora probably the nicest hotel in the country, it also arranges all the transfers from lodge to lodge as well as activities and guides for you.  If you are familiar with the Aman resorts, you will know they are a head and shoulders above the rest and they are known for their excellent service and ability to anticipate their guests’ every need.

Upon arrival in Paro airport, we were whisked away in our 4×4 for an hour and half drive towards Thimphu.  Not only is Thimphu the capital of Bhutan, it is also the largest and only city in Bhutan.  Thimphu was mainly farmland until Trashi Chhoe or Tashicho Dzong was revamped and became the official seat of the government in 1962 replacing the ancient capital of Punakha.  It is a blend of the old and new with traditional Buddhist sights and crimson clad monks next to new cafes, bars, and tourists in western dress.  The city is at an average elevation of 2300 meters which is not high enough to cause altitude sickness, though one may be a little short of breath when climbing up stairs on the first couple days.
Buddha Dordenma statue sitting on a ridge overlooking the city is the largest Buddha statue in the world.  It was made to celebrate the 60th birthday of the 4th king Jigme Singye Wangchuck.  There are 100,000 smaller Buddha statues housed inside this giant Buddha all made of bronze and gilded in gold. 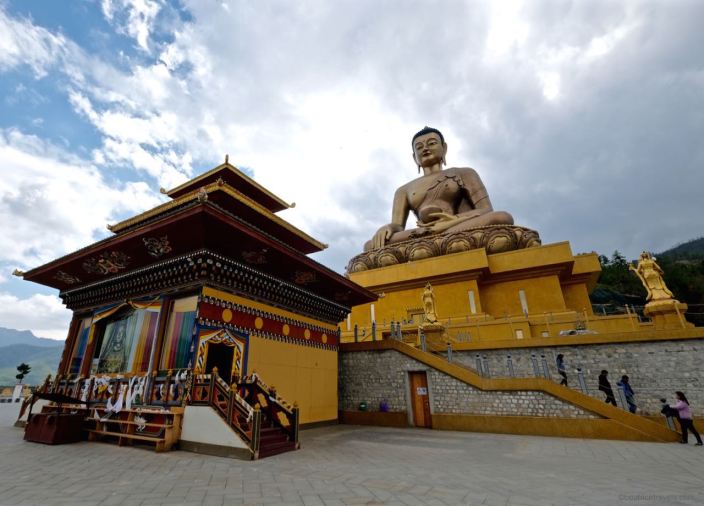 National Memorial Chorten is a large white stupa with a golden spire built in memory of the third King or Druk Gyalpo in 1974, though it does not house any human remains like other stupas.  It is one of the most visible structures in Thimphu and is part of the daily practice of worship by many Bhutanese.  People come here to circumambulate the chorten in a clockwise direction and spin the large red prayer wheels. 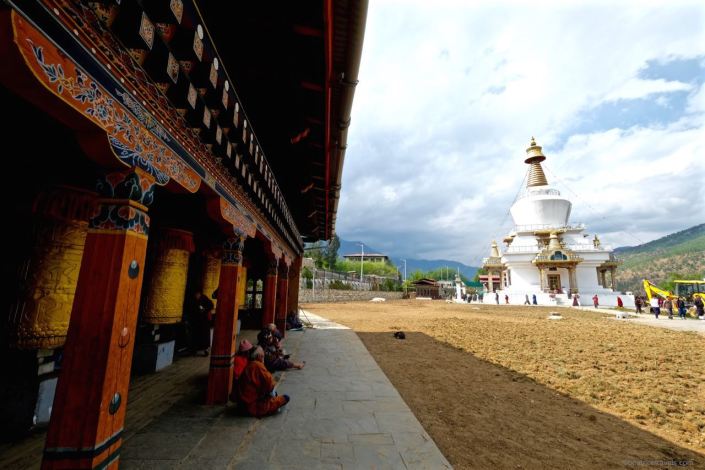 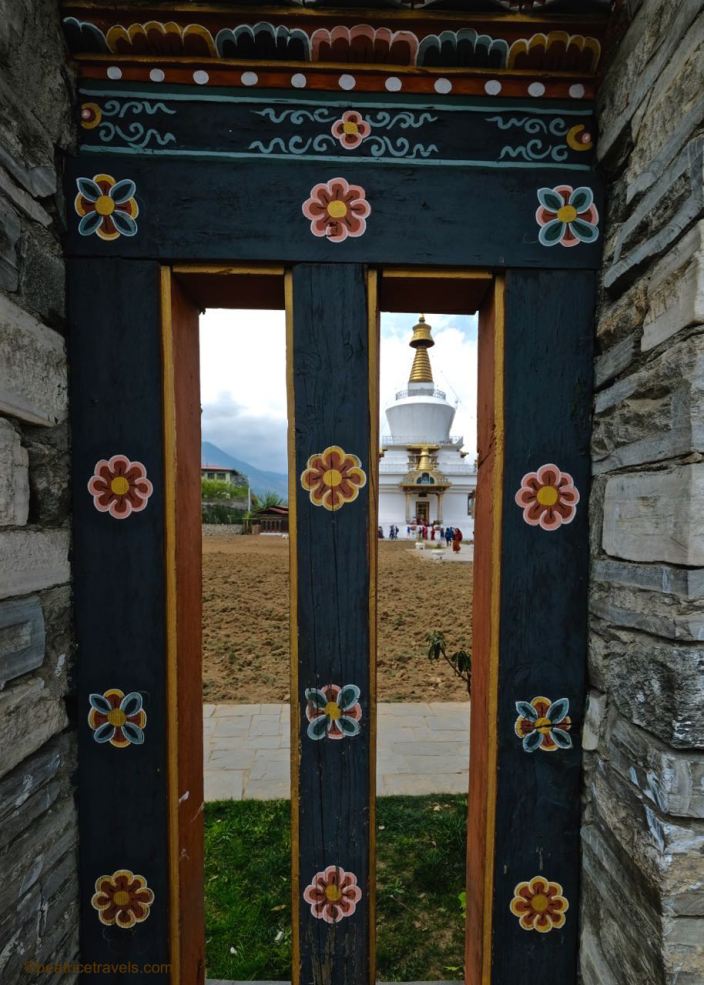 Thangthong Dewachen Nunnery on the hillside above Thimphu is home to around 60 nuns.  We arrived during their prayer session with nuns chanting mantras.  Unfortunately, none of the temples and monasteries allow photography inside. 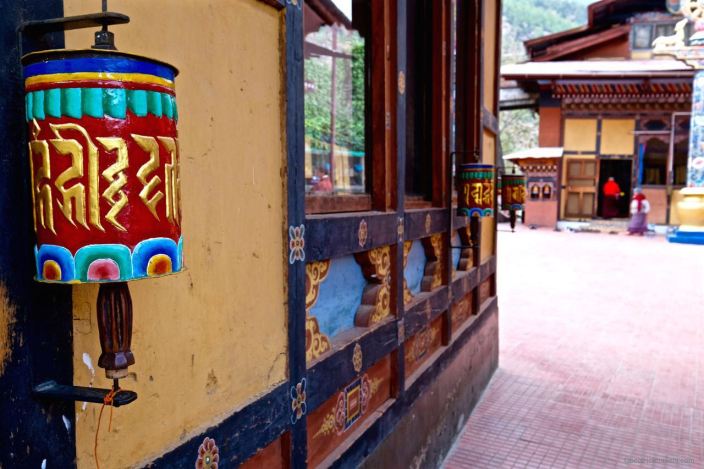 One of the most important sights in Thimphu is the Trashi Chhoe Dzong (Fortress of the Glorious Religion) which is the seat of Bhutan’s government and Royal offices.  Dzongs are built like fortresses with an exterior wall surrounding temples, courtyards, offices, etc.  They exist in each district and serve as defensive fortresses as well as religious and government centers where the annual tsechu (a Buddhist festival) takes place.  What is interesting is that dzongs are constructed without plans, instead the entire complex is built under the spiritual inspiration of a high lama.

We were in Thimphu on a Saturday which is the local market day.  Our guide took us to the main market and introduced us to many of the local produce which we have not seen elsewhere.  Interesting visit indeed!  We also spent some time visiting the different cottage industries such as weaving, paper making, and thangka painting. 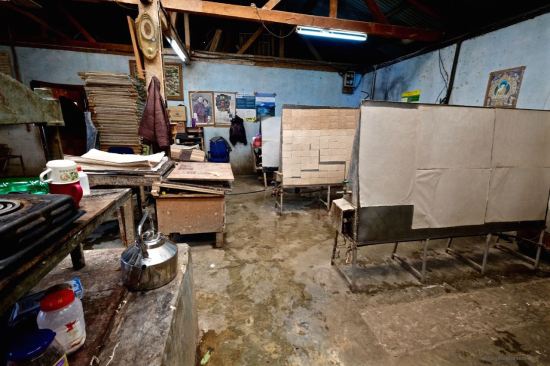 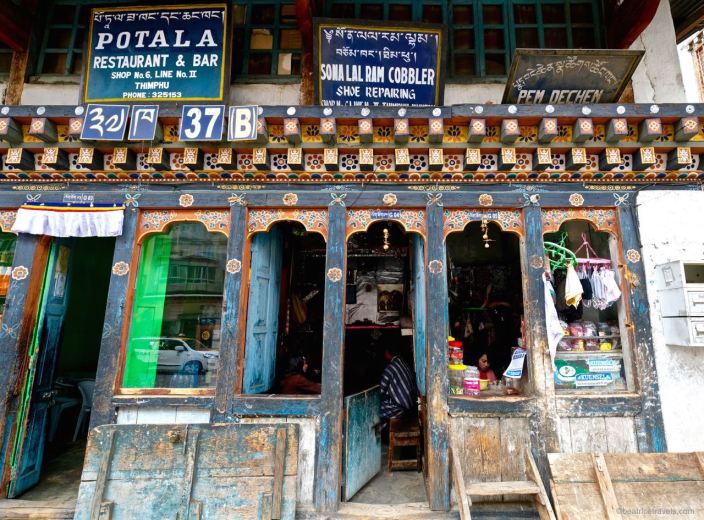 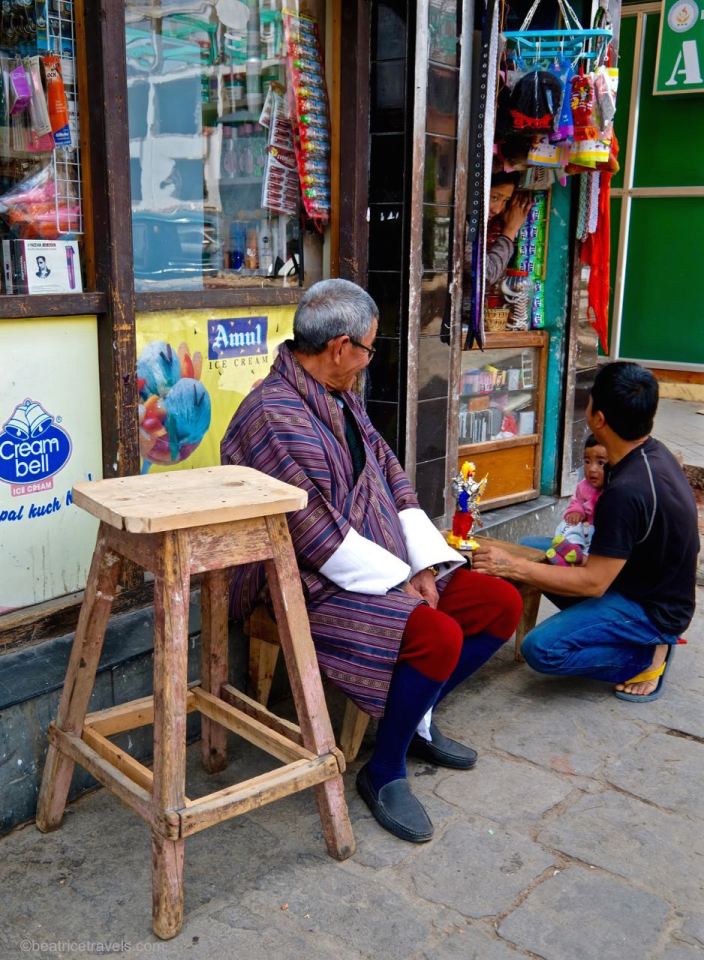 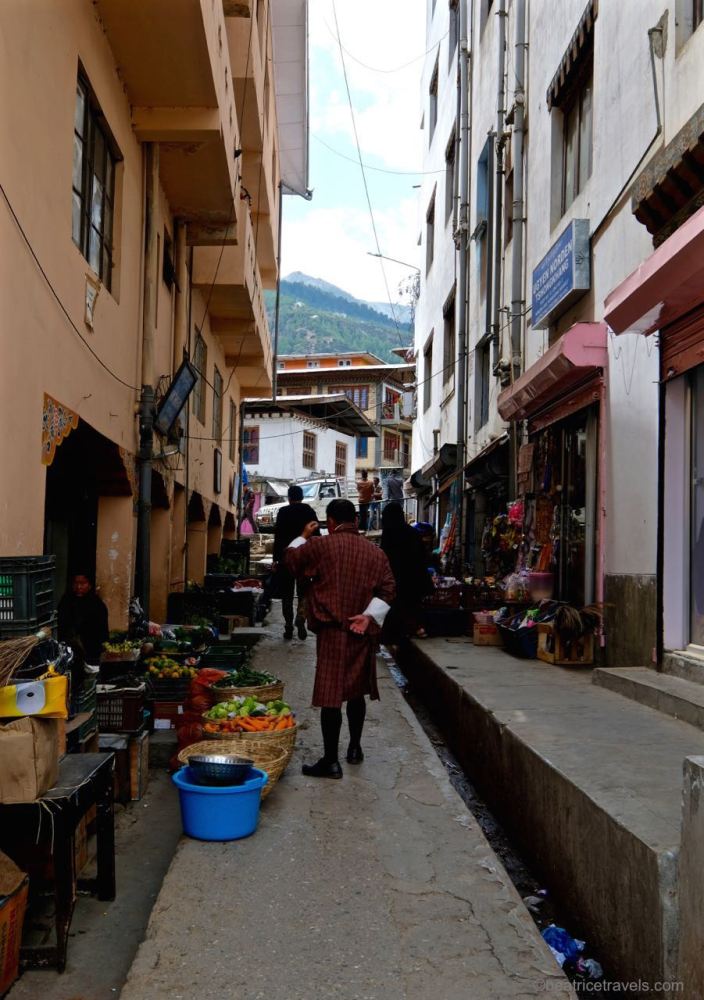 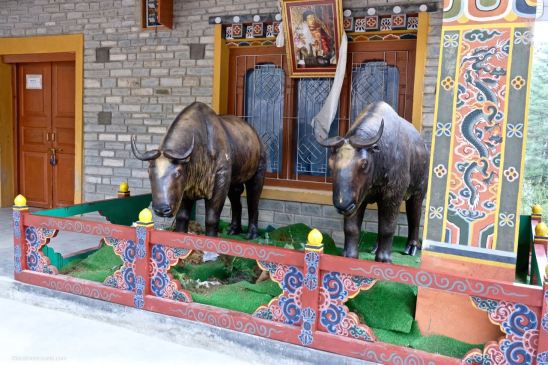 Unfortunately, during our visit, Cheri Goemba which is the first monastic body established in Bhutan was closed for renovations.  Instead, we went on a hike with views of Thimphu and Trashi Chhoe Dzong and ended up at a monastic school where the young monks were playing soccer outside their monastery.  A nice end to our brief couple days in Thimphu. 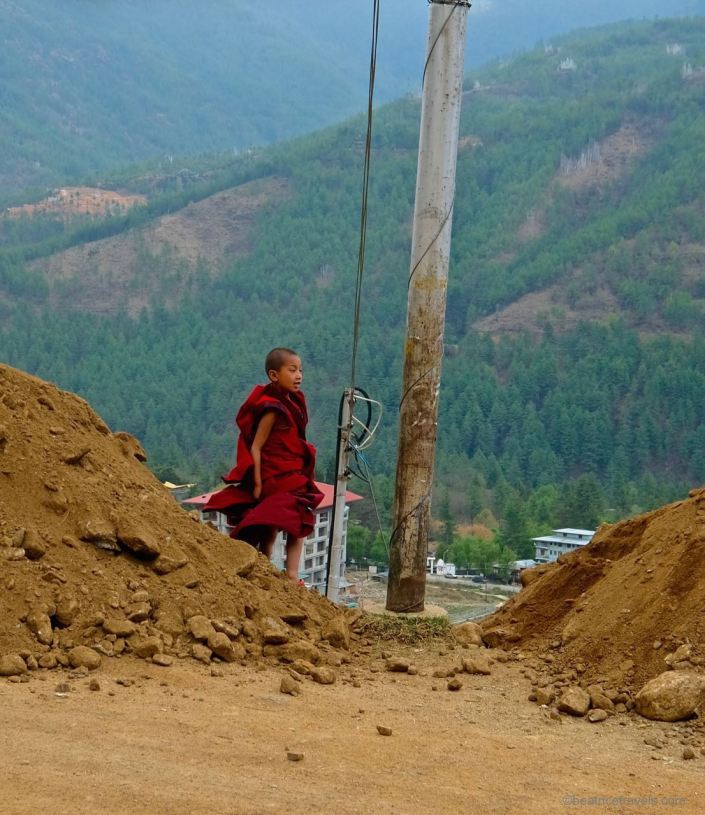 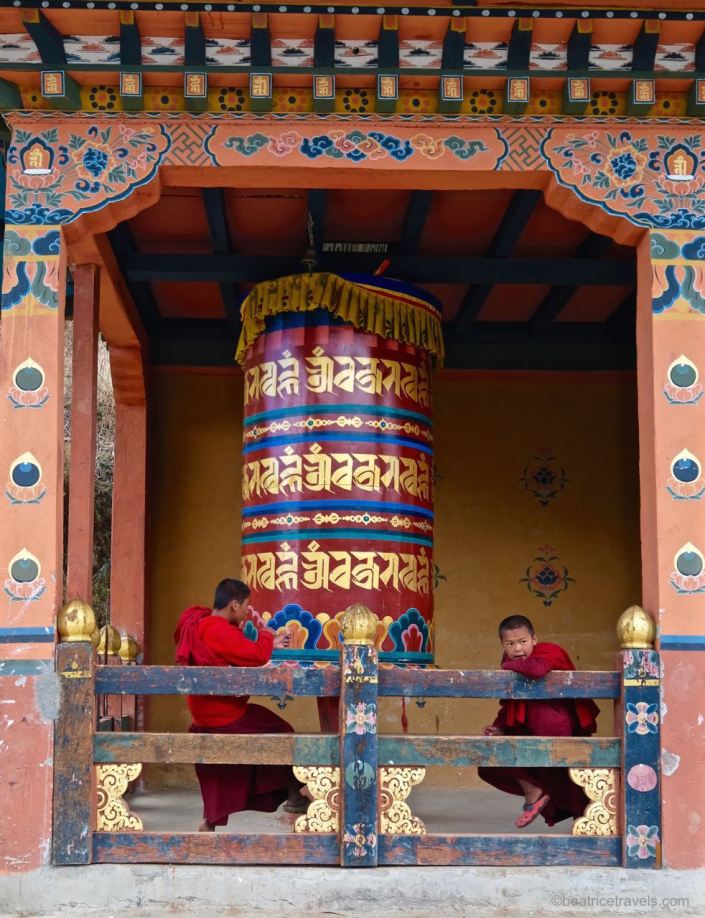 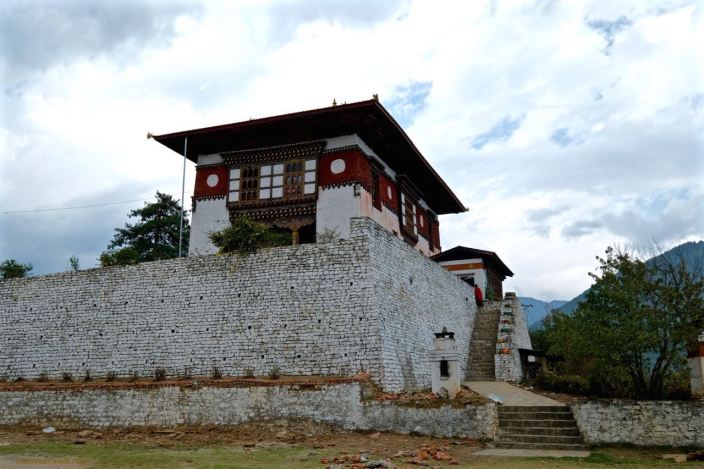 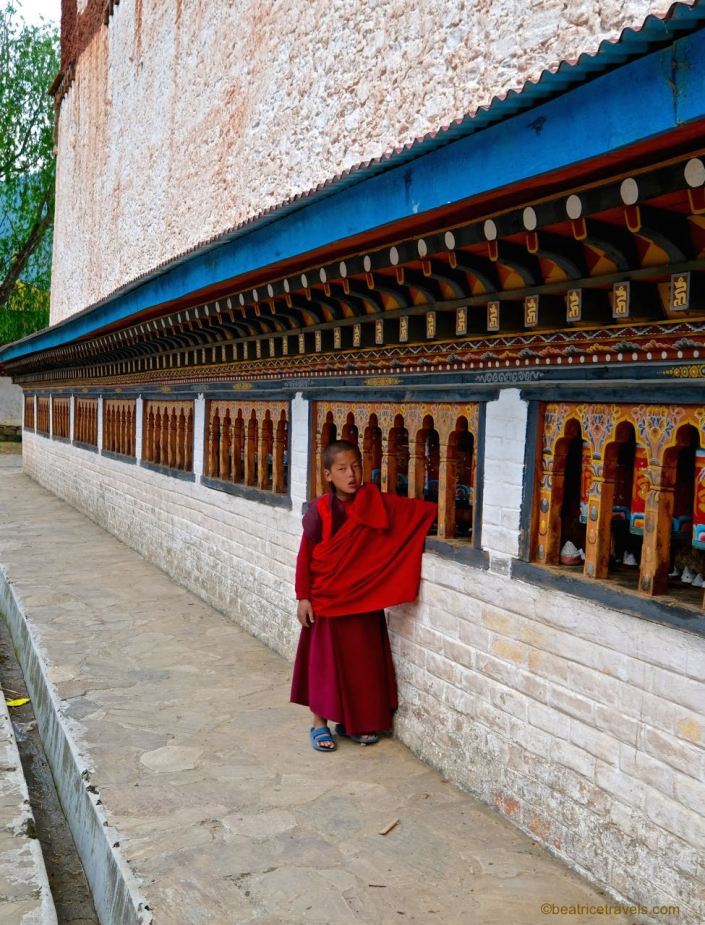 From Thimphu, we continue our Bhutan journey to Punakha.  Stay tuned!