All the art sites of Naoshima mentioned in my previous post are located on the southern coast of the island.  There are some more art installations near Miyanoura Port on the western side and in the fishing village of Honmura on the eastern side of the island.  Other than the yellow pumpkin near Benesse House, there is a red pumpkin also created by Yayoi Kusama near the Miyanoura ferry terminal.  Nearby is the Naoshima Pavilion by Sou Fujimoto based on the concept of the addition of a 28th island to Naoshima’s existing 27.  It is possible to enter the giant installation and you will inevitably see people posing as spiderman (more usually spiderwoman) inside.  Another place of interest near Miyanoura Port is Naoshima Bath or I❤️YU.  It is both an art installation and an actual bathhouse designed by Shinro Ohtake and is open until 9pm.  The exterior is absolutely whimsical with a collection of colorful knick knacks stacked together.

Bright and early in the morning, we took the Benesse House shuttle to the fishing village of Honmura to see the Ando Museum and the Art House Project.  Ando Museum opened in 2013, and is built within a 100-year-old wooden house.  Here Tadao Ando basically placed a concrete box with a curved ceiling into the original traditional house contrasting wood with concrete, light with darkness, and old with the new.  On display inside are photos, sketches, drawings and models of architect Tadao Ando. 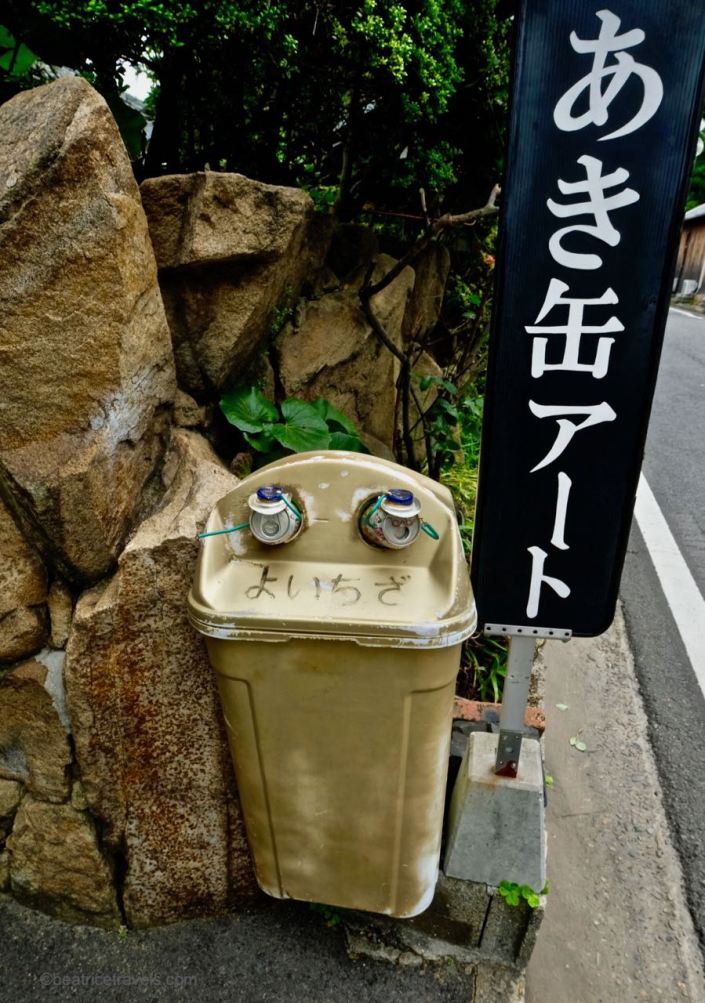 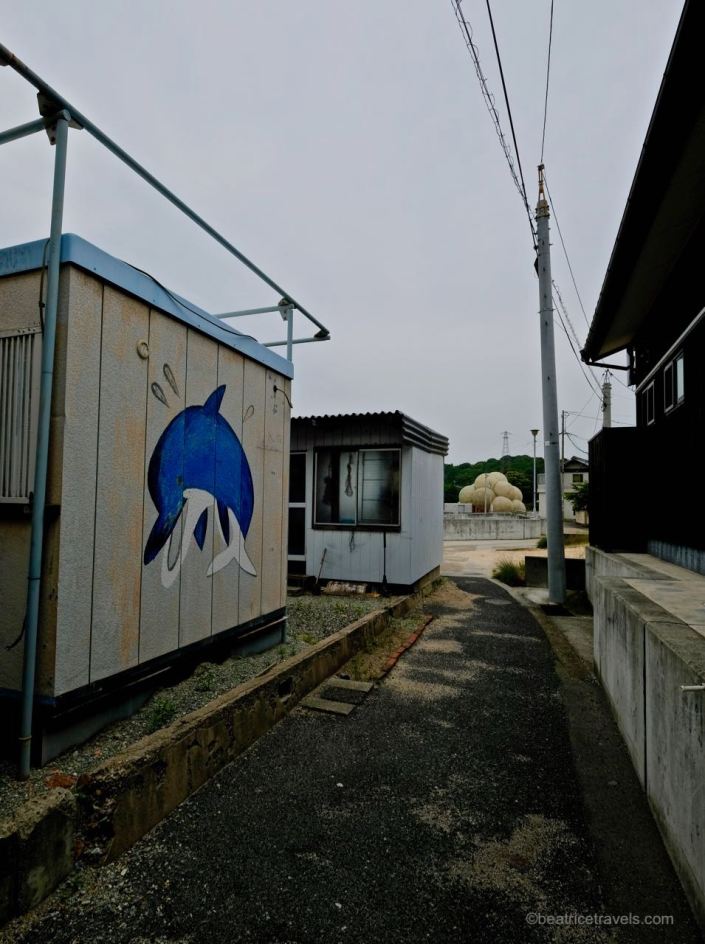 The Art House Project in Honmura is a collection of abandoned houses that have been converted into art installations.  These houses are scattered throughout the village mixed in with some small cafes and shops.  There are seven locations: Kadoya, Minamidera, Kinza, Gokaisho, Go’o Shrine, Ishibashi, and Haisha.  Head to Honmura Lounge & Archive where you can purchase a multi-site ticket for all the houses except Ando Museum and Kinza.  Kinza is the only one requiring advance reservations which you can book online.  My suggestion is to head to Minamidera first to secure a time slot because admittance is once every 15 minutes.  If there is time before your viewing session at Minamidera, you can easily pop down the street to visit Ando Museum during the wait.

Kadoya was the first building converted in the Art House Project.  It is a restored 200-year-old traditional storehouse with 3 artworks by Miyajima Tatsuo on display here including a LED display set in a pool of water called Sea of Time, a window turned into a digital display called Naoshima’s Counter Window, and a modern take on a Japanese scroll painting called Changing Landscape.

Minamidera is a new building built on the former site of a temple.  On display here is the collaboration between Tadao Ando ad James Turrell titled Backside of the Moon.  You enter a pitch dark room, so dark you cannot even see your hand in front of your face.  We were instructed to sit in darkness for 5 minutes as our eyes adjusted, a light grey screen soon came to view and we were told to walk towards it and touch it.  What is interesting was that the white wall was always there and the lighting in the room has not been brightened, it was just our eyes adjusting to the darkness.

Kinza is a small 200-year-old house that can be visited from Fridays to Sundays by prior appointment only.  Bring your booking confirmation to the Honmura Lounge and Archive to get your ticket.  Only one person is allowed to enter each time for 15 minutes so only 18 people get to see Kinza on any given day.  Kinza has been renovated using traditional techniques housing a single art installation Being Given by Rei Naito.  It is at the same time minimalistic and filled with tiny details such as small disks, marbles, thin strings etc. like her other work Matrix at the Teshima Art Museum (which I will talk about in the next post).  The entrance to the building is very small only 1.2 meters high and inside there are no windows with the light coming from slits along the floor of the walls.  There is a large round ring raised from the ground.  Between the two wooden beams that support the ceiling, there is a glass cylinder suspended in air.  It would be interesting to first visit this Being Given which is all about darkness and then Matrix which is all about light and see her evolution over 10 years time.

Gokaisho means “place to play go” and was actually where villagers gathered to play the game of go.  Here wooden hand carved camellia flowers are arranged on the tatami floors with a small courtyard planted with real camellia flowers to contrast the wooden ones. 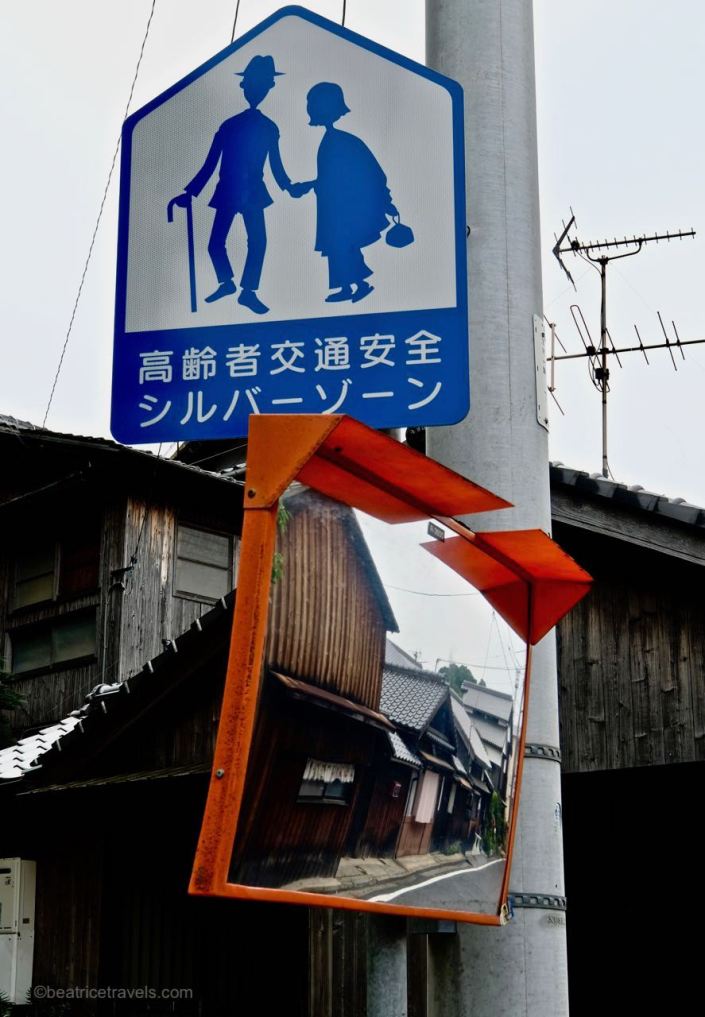 Go’o Shrine is a reinterpretation and rebuilding of a former Shinto shrine right off the seaside in Honmura by artist Hiroshi Sugimoto.  An optical glass staircase on the side links the main structure to an underground stone chamber with the idea of the unity of heaven and earth. 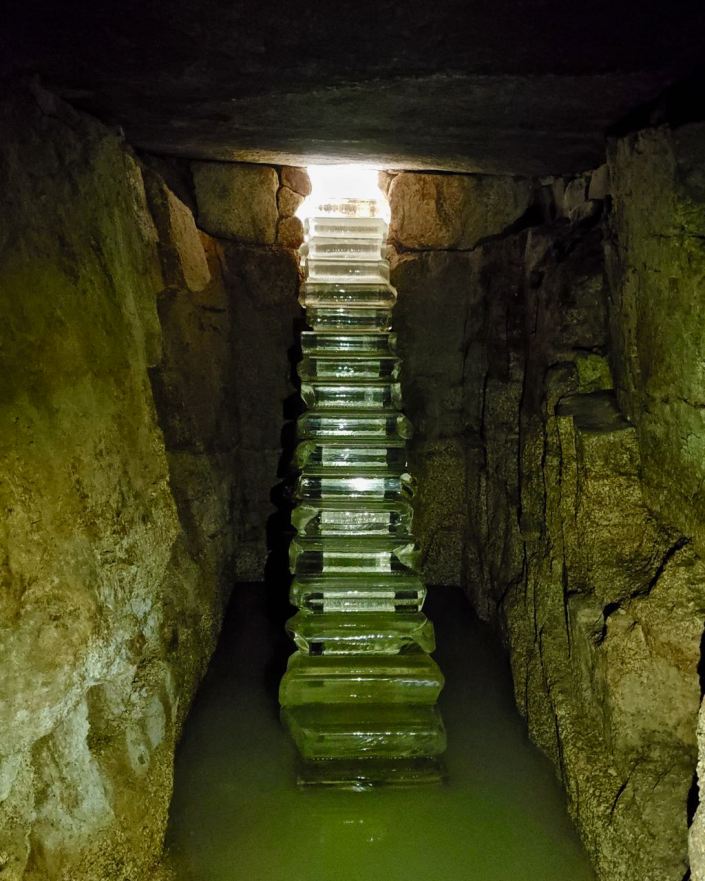 Ishibashi was the former home of the Ishibashi family who were salt merchants.  The 100 year-old-building now houses 2 paintings by Senju Hiroshi where one is directly painted onto the sliding doors of the main building and the other depicts a waterfall and hangs in the adjacent storehouse.  This restoration project is aimed at the understanding of the history and culture of Naoshima.

Haisha means “dentist” and was actually once the office and home of a dentist on the island.  The 2-storey house displays several large sculptures including a replica of the Statue of Liberty as well as Shinro Ohtake’s Dreaming Tongue.

Exploring the Art House Project took us about half a day and was quite a fun experience wandering around the small village of Honmura.

Next post will be on the neighboring Teshima Island.  Stayed tuned!