After our time in Translyvania, we headed northeast towards the region of Moldavia specifically to see the Painted Monasteries of Bucovina.  The drive from Brasov took almost 6 hours.  We based ourselves in the small town of Guru Humorului which is very close to two of the four main monasteries people visit: Voronet and Humor Monasteries. We stayed at the Pension Casa Humor which is acceptable for such a small town and especially since the region of Moldavia is known to be underdeveloped and relatively poor.  It is definitely worth the effort to come and see these medieval painted monasteries that have stood in this forgotten land for nearly 500 years.  They were built for Roman Orthodox worship in the aftermath of the Byzantine Empire.  Most were built by Stephen the Great or by his son Prince Petru Rares.  They commissioned artists to cover the monasteries with eleven biblical stories which became like a checklist for the painters.  What is special about these monasteries is that they are each decorated with unique colors both inside and out.  They are like nothing I have seen elsewhere.  The exterior walls are painted with frescoes depicting scenes from the Bible, of angels and demons, and of heaven and hell.  Because few people could read in those days, the intention of these beautiful frescoes was to let villagers understand and learn the story of the Bible and the lives of Orthodox saints.  The best preserved are the monasteries of Humor, Moldovita, Patrauti, Probota, Suceava, Voronet, Sucevita, and Arbore.  These Churches of Moldavia were made a UNESCO World Heritage Site in 1993 with Sucevita being added in 2010.

We visited four of these monasteries with the first being Humor Monastery or Church of the Assumption of the Virgin.  This monastery was founded in 1530 and is one of the first of Moldavia’s monasteries to be frescoed on the exterior as well as the interior.  It has an abundance of frescoes including the depiction of the “Return of the Prodigal Son” and also a fresco depicting the devil as a woman.  The predominant colors of this monastery are reddish brown with some blues and greens.  You will notice that the church is without a steeple which means that it was built by a court official and not a prince.

Next we visited Sucevita Monastery or the Church of the Resurrection, founded in 1581 by the Bishop of Radauti.  It took over 20 years to build and looks more like a fortress than a monastery.  It is surrounded by high walls and guard towers.  It is the last of the 22 painted monasteries of Bucovina built and has the largest number of frescoes.  The predominant color here is green and red.  On the southern wall is the depiction of the Apocalypse of the Book of Revelation.  There is a wonderful depiction of the Ladder to Paradise with the virtuous, assisted by angels, ascending up the ladder to heaven and the sinners falling through the rungs into hell.  The western wall has been left blank and this was because the head painter fell and was killed leading other painters to believe that the western wall was cursed. 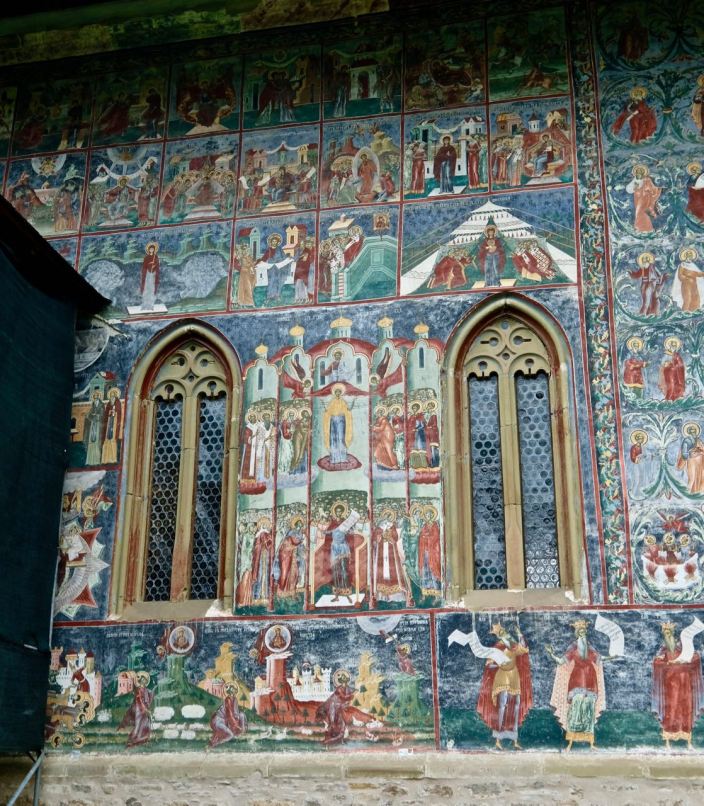 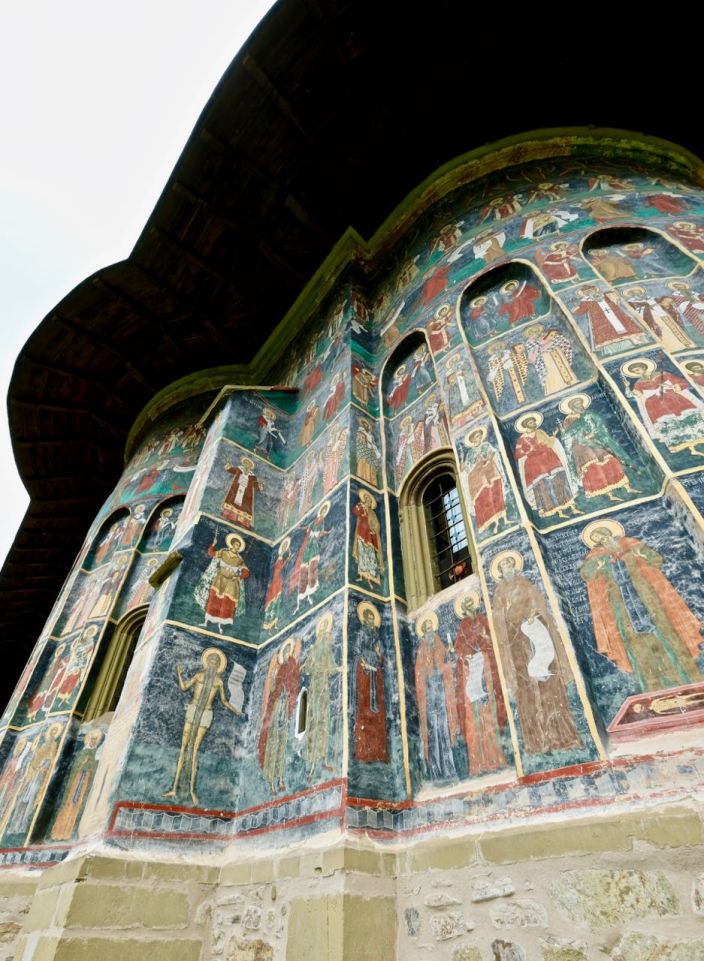 From Sucevita Monastery, we continue on to Moldovita Monastery or Church of Annunciation, built in 1537 by Prince Petru Rares.  It is predominantly painted in gold and deep blue.  The most important fresco here is the Siege of Constantinople where the intervention of the Virgin Mary saved the city of Constantinople from Persian attack.  Also well preserved here are the frescoes depicting the Last Judgement.  One can only imagine the awe and admiration when the peasants came face to face with this beautiful monastery hundreds of years ago. 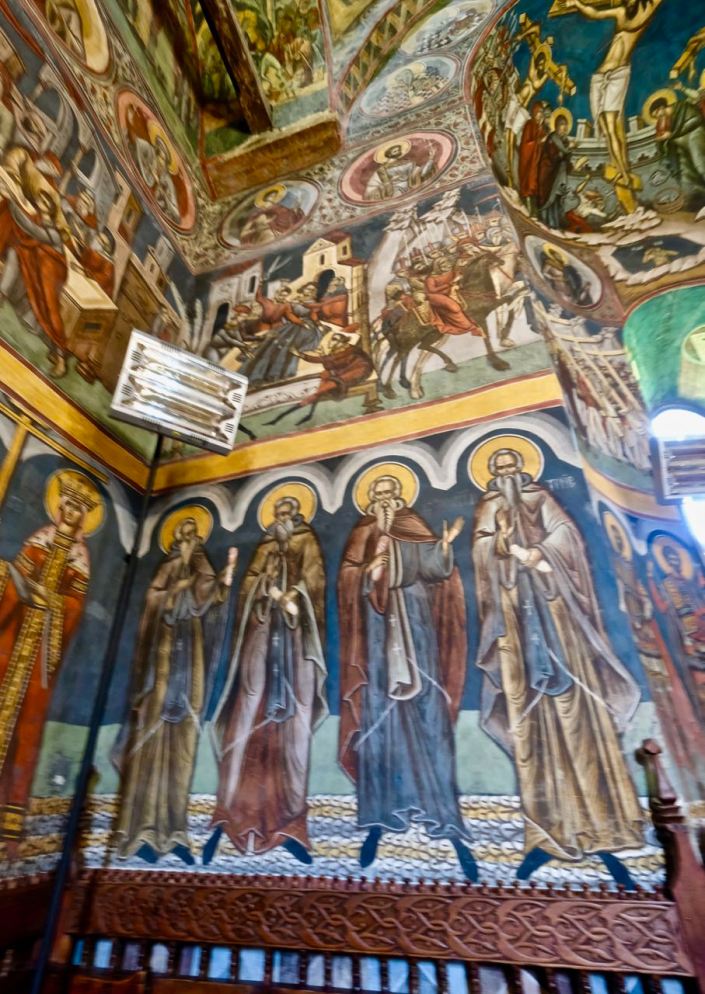 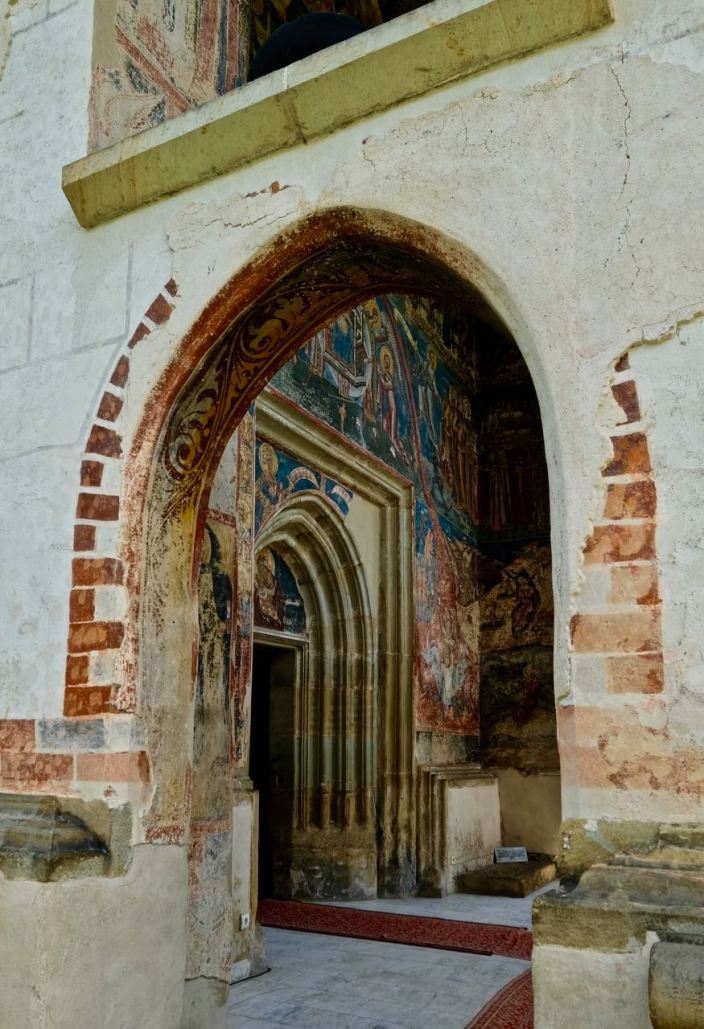 Voronet Monastery or Church of St George was the last church we visited.  It was founded in 1487 by Stephen the Great who was at the time the ruling prince of Moldavia.  Voronet Monastery is often deemed the most beautiful of all the painted monasteries and was known as the Sistine Chapel of the East across Europe back in the day.  The predominating color here is an intense shade of blue commonly known as voronet blue made with crushed lapis luzuli.  Even to this day, the exact composition of the paint remains a mystery.  The exterior frescoes depict scenes from the Garden of Eden all the way to the Last Judgement.  Monastic life at Voronet was halted under the Habsburg rule until 1991 when a community of nuns took over.  This is arguably the pinnacle of Orthodox religious art of its time and what makes it even more impressive was that it was said to be built in 3 months, 3 weeks, and 3 days.

I have to say few religious monuments are as mesmerizingly beautiful as these painted monasteries.  On top of being art masterpieces, they serve the purpose of spreading the teachings of the Bible to a largely illiterate peasant population during a difficult time in the Roman Orthodox faith.  To a non-religious person like me, it was still extremely interesting to see how the various biblical stories were depicted by the master painters of the time.  These Painted Monasteries of Bucovina are definitely the highlight of my Romanian adventure and a must see for anyone traveling to the country.

Instead of driving all the way back to Bucharest, we dropped off the rental car at Suceava Airport about an hour away from the monasteries and caught the evening flight (a little over an hour flight) back to Bucharest.  Stay tuned for my next post on Bucharest!