When I tell my friends I am visiting Ethiopia, many of them still had the image of hunger and poverty-stricken children with their large tummies publicized during the Live Aid concerts of the mid-1980s.  Ethiopia still experiences droughts and I am sure there are still malnourished children in the country.  But it is more than that.  Ethiopia is one of the oldest countries in the world and the second to accept Christianity after Armenia.  Ethiopia was a monarchy for most of its history tracing back to the 2nd century BC. Ethiopia and Liberia were the only African countries that retained their sovereignty during the Scramble for Africa which was the colonization and occupation of African countries by European powers between 1881 and 1914.  Other than the 5 years Ethiopia was occupied by Mussolini’s Italy, it has maintained its status as an independent country throughout history.  Travel within Ethiopia is still a bit of a challenge and you will find yourself constantly flying back to the capital Addis Ababa for flight connections or overnight transits.  It is usually quite annoying when flights don’t connect and you have to spend the night and connect the next day.  However, this time I welcome the overnight layovers in Addis Ababa and in particular at the Sheraton Hotel there.  The Sheraton Addis Ababa is no ordinary Sheraton, it is much more like a St Regis and is almost double the price of the other hotels in town.  I gladly left most of my luggage there on my trips to the Omo Valley down south and to Lalibela up north.  It was always a relief to come back here for a proper shower, decent food, clean rooms and bathrooms, efficient and clean laundry service, and other modern creature comforts.  There is only so much “roughing it” I can take.  Sheraton Hotel in Addis Ababa became my pitstop to refuel, repack, and rest before taking off again to the less developed areas of the country. 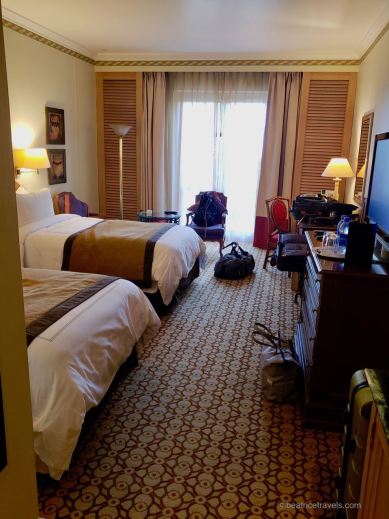 There is not very much to see in the capital Addis Ababa and it reminded me of a larger Kigali (capital of Rwanda).  Regardless, we did a quick city tour.  We went up to Mount Entoto overlooking Addis where Emperor Menelik II first built his palace in 1882.  It is from this highest peak that he saw Addis Ababa and subsequently made it capital of Ethiopia.  Up here Emperor Menelik II built the Church of Mariam dedicated to the Virgin Mary.  He was crowned in this church in 1889.  There are also several museums displaying furniture, photographs, and belongings of the Emperor Menelik II up here. 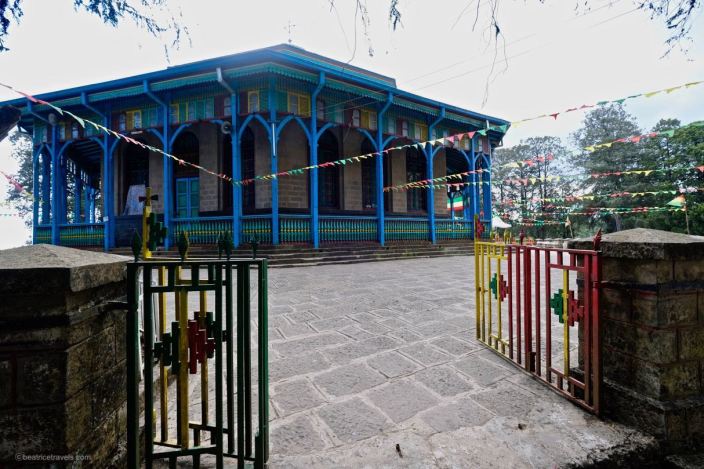 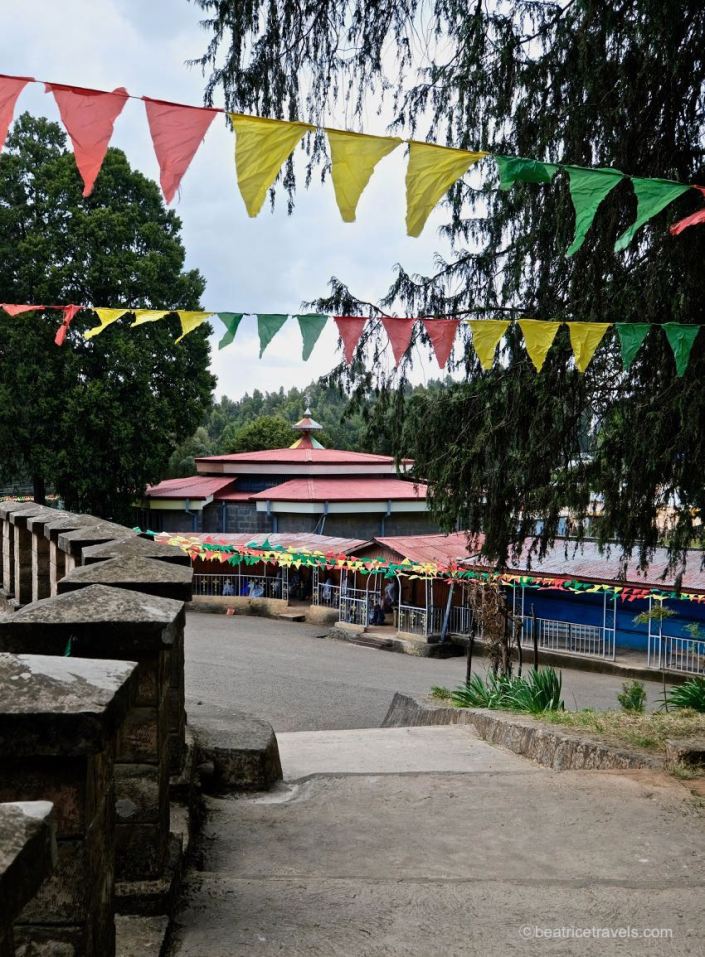 Another place of interest in Addis Ababa is the National Museum of Ethiopia, famous for the 3.2 million year old bones of Lucy.  Lucy is the most complete and oldest homonoid skeleton ever found.  She was unearthed in 1974 in the Danakil desert in northeastern Ethiopia.  What we see on display is a plaster copy of Lucy while the original bones are locked up in a safe inside the museum.  Also on display are relics from the Axumite and Gondarene periods through to the time of Tewodros and Menelik II.

We had a pleasant drive around Addis passing by many monuments and churches.  St George’s Cathedral is an Ethiopian Orthodox church and one of the most beautiful in Addis.  It was commissioned by Emperor Menelik II to commemorate his defeat of the Italians in 1896 and was dedicated to St George, the patron saint of Ethiopia.  The church is where Empress Zewditu (in 1916) and Emperor Haile Selassie (in 1930) were crowned.  We also drove through the crowded and chaotic Merkato market which is the largest open air market in Africa.  Renowned for its pick pockets, this market is huge with sections and streets dedicated to different products.  It looks more like a slum with lines of tin shacks selling different things.  I would not recommend venturing into the market on foot, other than the safety issue, you can easily get very lost or get run over by the many carts and trucks in the area. 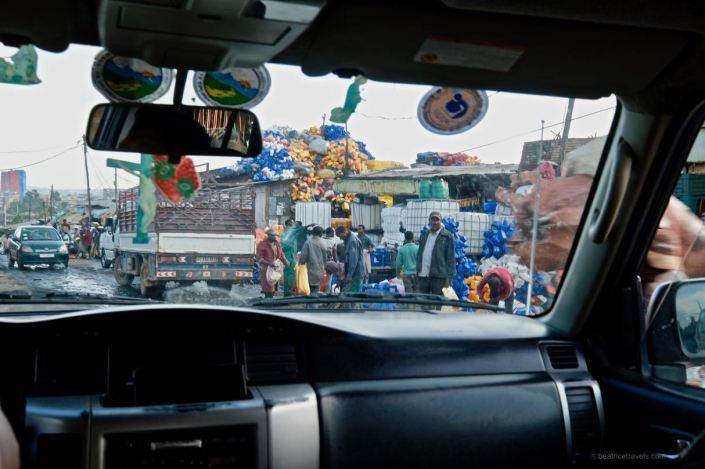 Many of you may not know that Ethiopia is the birthplace of coffee and where the first arabica coffee was grown.  Tomoca is the most famous and oldest coffee brand in Ethiopia.  It’s oldest branch located in the Piazza area has been there since 1953.  It is small and has high stools like Italian style coffee shops.  We stood around and had our Expresso size black coffees.  For coffee lovers, this is the gold standard.  The shop also sells their coffee beans as well as ground coffee which of course I bought to bring home. 😊 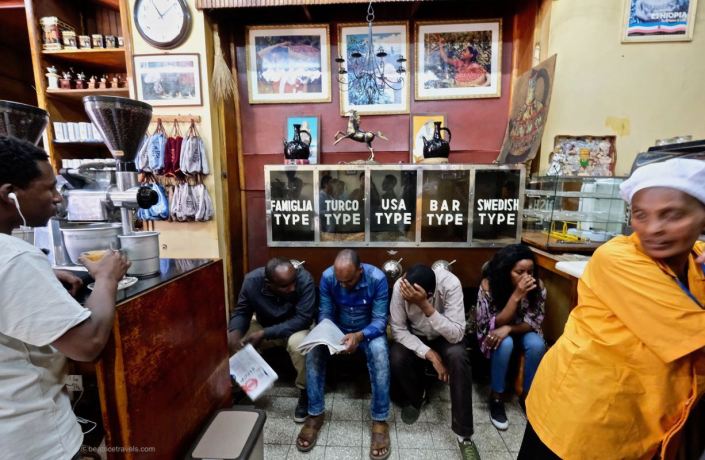 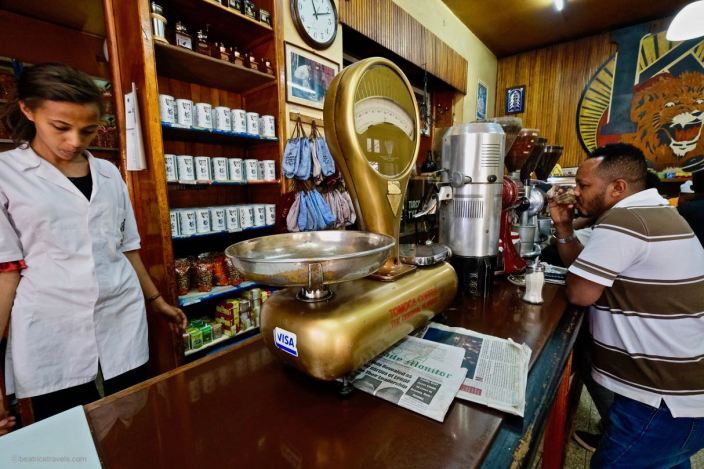 When in any foreign country, trying out its traditional food is a must.  The hotel sent us to Yod Abyssinia Traditional Restaurant where they perform traditional dances and songs while serving you Ethiopian food.  It is quite a large and busy restaurant filled with both tourists and locals.  Injera is Ethiopia’s national dish which is a grey spongy almost towel-like flat bread topped with vegetables, meats, and sauces.  The injera flat bread is a bit sour and most of the toppings are on the spicy side.  I actually didn’t mind it so much but the injera was too filling and without eating very much, I felt completely stuffed.

After replenishing our supplies and our stomachs, armed with fresh laundry, we head north to visit the magnificent churches of Lalibela.  Stay tuned!