From Mauritius, we continued on north to the 115-island nation of Seychelles.  Seychelles was first controlled by the French and then by the British with it becoming a crown colony separate from Mauritius in 1903.  In 1976, it gained independence as a republic of the Commonwealth.  Of the 115 islands, only about 42 are inhabited with the largest being Mahe, Praslin, La Digue, and Silhouette Island.  Seychelles has been referred to as “The Galapagos of the Indian Ocean” with giant tortoises and many birds and the rare coco de mer palms.  We stayed on Mahe Island at the Four Seasons Resort at Baie Lazare mainly because our flight from Mauritius didn’t arrive until the evening which meant it would have been difficult to connect onto the other islands.  Staying overnight in Mahe and then moving again the next day would be too much of a hassle for our short 3-night stay. 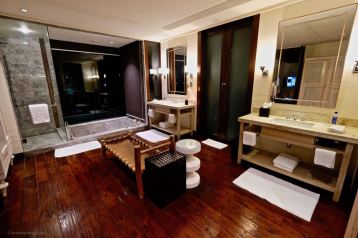 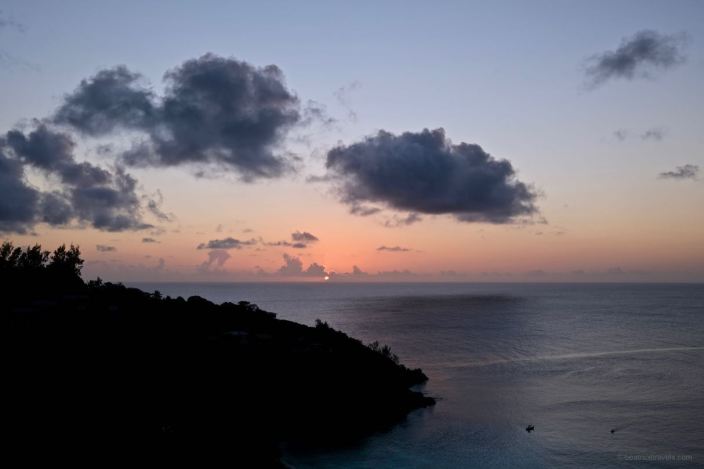 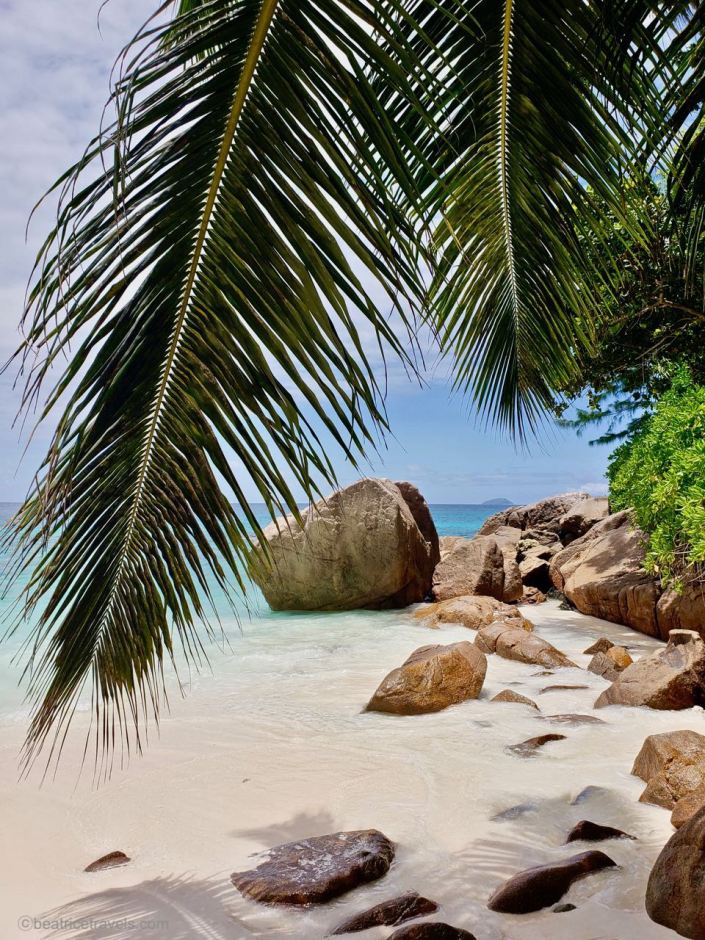 We decided to spend a day at neighbouring Praslin and La Digue.  Since La Digue is only accessible by ferry from Praslin, we had to first go from Mahe to Praslin.  We opted for the 15-minute flight from Mahe to Praslin instead of the hour or so ferry ride through quite choppy waters.  Surprisingly, the cost for flying is about the same as that for the ferry.  I wonder why not more people opt for the flights.

We arranged for a driver/guide to pick us up from Praslin airport and take us for a quick visit at the Unesco Vallee de Mai before dropping us off at the pier for our ferry ride to La Digue.  Lodoicea or more commonly known as coco de mer is a palm species endemic to Vallee de Mai in Praslin and Curieuse Island of Seychelles.  This palm has male and female trees each with parts that resemble male and female parts.  The coco de mer palm can grow to 25 meters high and takes 15 or more years to grow a trunk.  Before the trunk is grown, the palm will have numerous stalks.  You can tell the age of the palm by how many stalks it has.  The coco de mer palm usually takes 20-30 years to mature and only until it first flowers after maturity can you determine the sex of that particular tree.  The male tree will have “catkins” and the female trees are the only ones that will bear fruit.  The fruit of the coco de mer has the largest seed in the plant kingdom with the largest seed ever found weighing 32kg!  The nut takes 6-7 years to ripen and then another 2 years to grow a new plant.  People believed that the male trees would uproot themselves and approach the female trees and made passionate love on stormy nights.  Legend has it that those who witness the trees mating will die or go blind.  Moreover, the pollination process is still not fully understood though it is believed that they depend on wind for pollination.  In the past, coconuts fell from the trees and after the germination process, the nuts become hollow and float in the sea carried by sea currents to Maldives.  The locals gathered these coco de mer or sea coconuts on the beach and believed that they grow on a mythical tree in the ocean.  Other legends claim that Vallee de Mai on Praslin where these coco de mer palms are found was the original Garden of Eden and that the coco de mer was the forbidden fruit of the tree of knowledge of good and evil.  It is definitely the strangest plant I have ever seen. 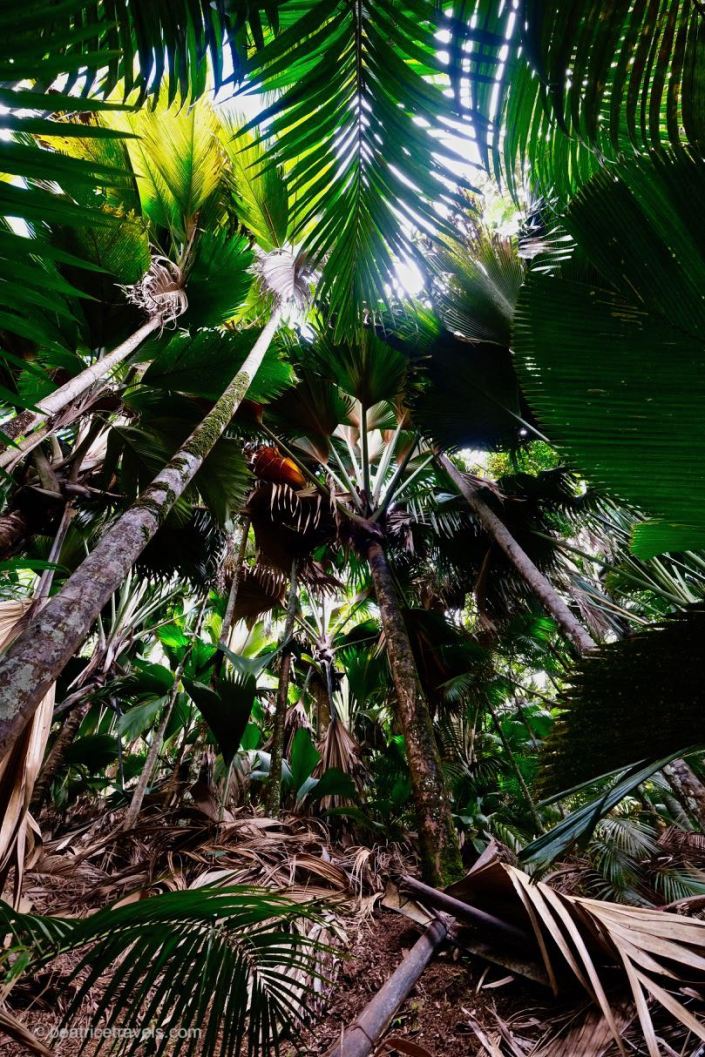 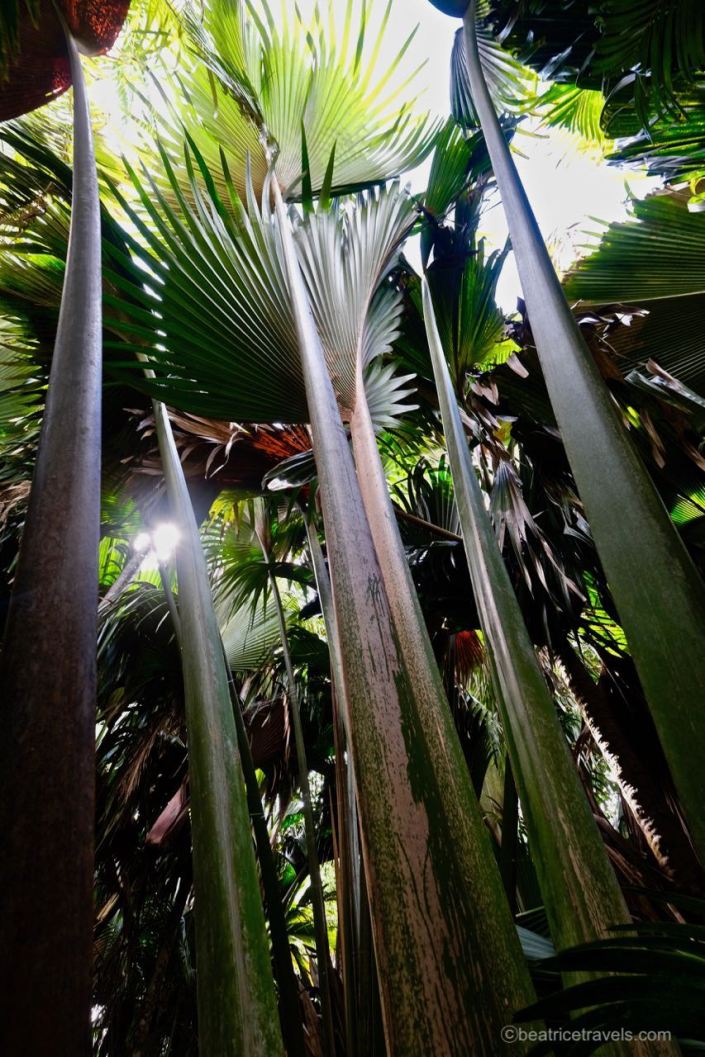 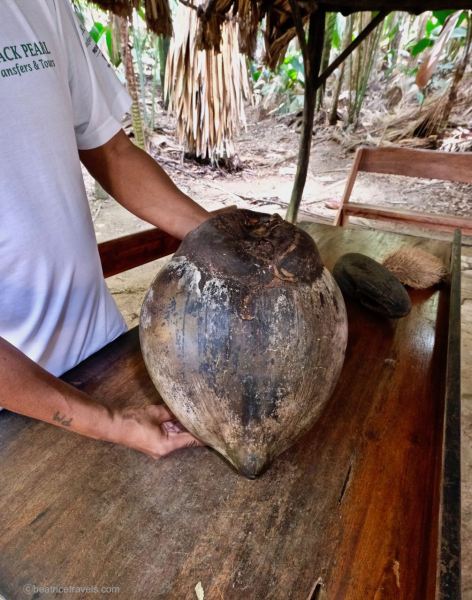 I managed to purchase one of these weird coco de mer seeds to bring home.  Make sure the store provides you with a license for export and a sticker on the seed that matches the number on the license.  When you leave the country, you have to show the customs/security officers and they do take the seed out and check and record the license information.  I wanted to taste the fruit but was told they are rare since it takes them a long time to grow.  Apparently, there is a big festival every year and that is when you can taste the fruit.  I was told it tastes like a coconut but better.

From Praslin, we took a 20-minute ferry to La Digue.  La Digue is definitely more laid back than the other larger islands in Seychelles and retains that slightly undiscovered paradise feel.  Cars were not allowed until recently when some residents brought over cars and the few taxis on the island.  Most people ride their bicycles around.  We came here mainly for the beach at Anse Source d’Argent which is one of the most beautiful beaches I have ever visited.  On top of the white sands and clear emerald waters, the giant sculpted granite boulders here make this beach different.  You have to pass through the old L’Union Estate coconut plantation in order to get to the beach.  The L’Union Estate is like a theme park with a hodge podge of “attractions” from an old mill to a colonial graveyard to an enclosure with giant tortoises.  We had pre-arranged a taxi which took us all the way from the pier to the small cafe right outside the beach entrance.  From the cafe, you can walk along a sandy path bordering the water with many coves and beach areas for you to relax.  I have to say the beaches here are undeniably one of the most beautiful I have seen with white powder sand lapped by turquoise water and big boulders.  Further south from Anse Source d’Argent is Anse Marron which can only be reached on foot.  You will find here a bunch of giant granite boulders creating some natural pools amongst the white sand. 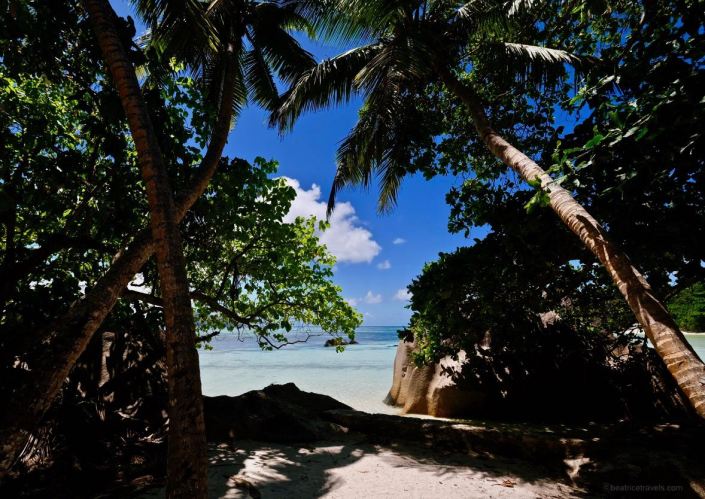 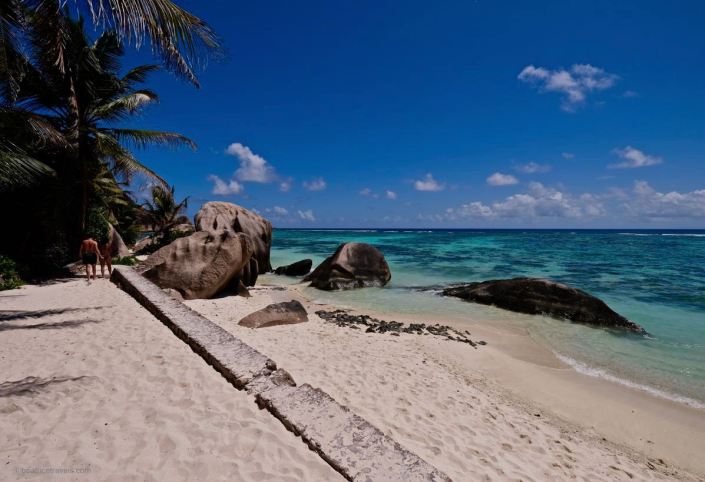 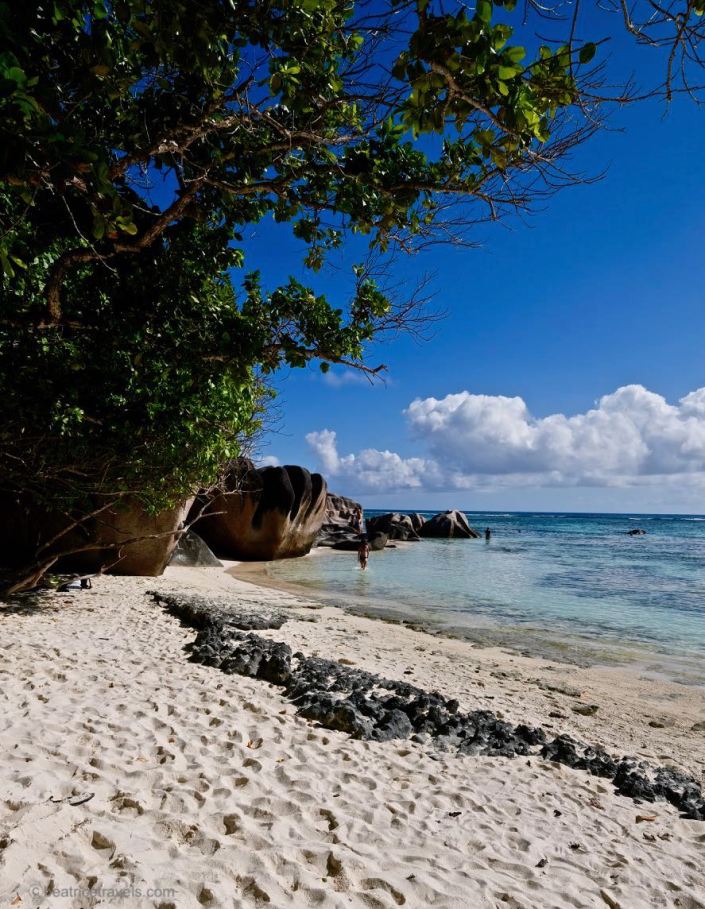 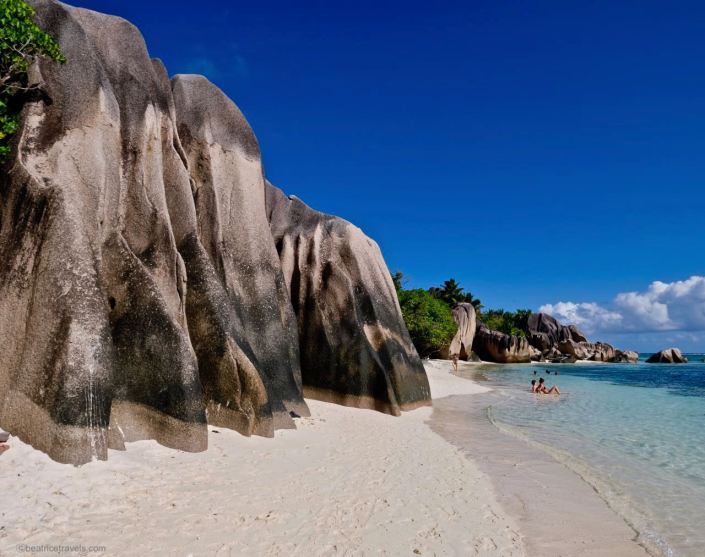 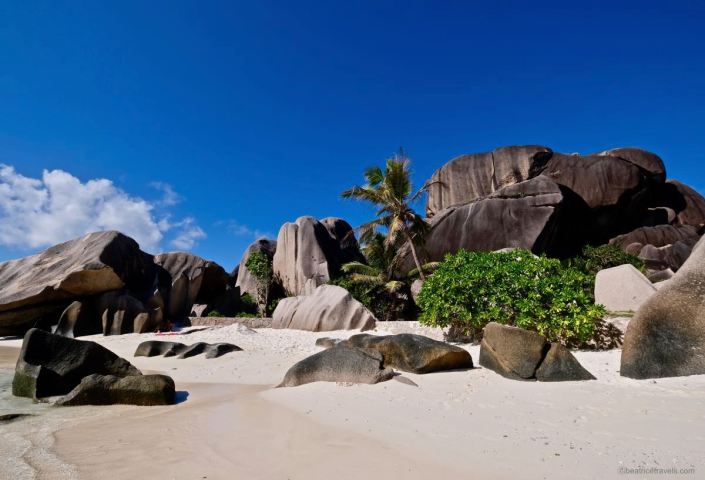 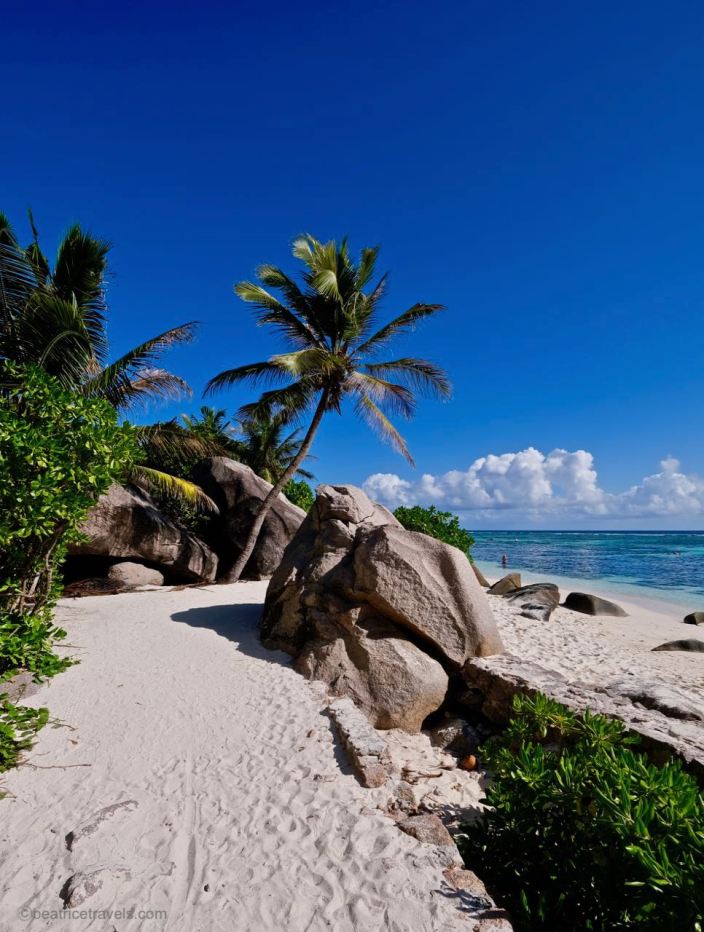 After months of planning and anticipation, in the blink of an eye, my trip to Africa came to an end.  I have to say this is one of the most memorable journeys I ever made.  How appropriate to end such an epic journey at an equally amazing destination, no doubt one of the most beautiful beaches I have ever visited.  Stay tuned for my next adventure!