Since it is low water season of the Nile, we could not sail from Luxor to Qena and instead had to drive about 60km north in order to visit the Ptolemaic Temple of Hathor in Dendera.  Hathor was one of the most popular goddesses in ancient Egypt.  She was the goddess of the sky, of women, of beauty, of joy, of love, of music and of celebration.  The Greeks often associated her with Aphrodite.  She has also been associated with the cycle of birth and rebirth after death.  Most of the time Hathor is depicted with the horns of a cow with the red sun disk of Horus between her horns.  Sometimes she was even depicted as a woman with the head of a cow.  The Dendera Temple Complex is one of the largest and best preserved in Egypt covering an area of 40,000 square meters.  It was well preserved because it was completely covered with sand for over two thousand years.  Within this complex are the Temple of the Birth of Isis, a sanatorium, a sacred lake etc with the most impressive being the Temple of Hathor. 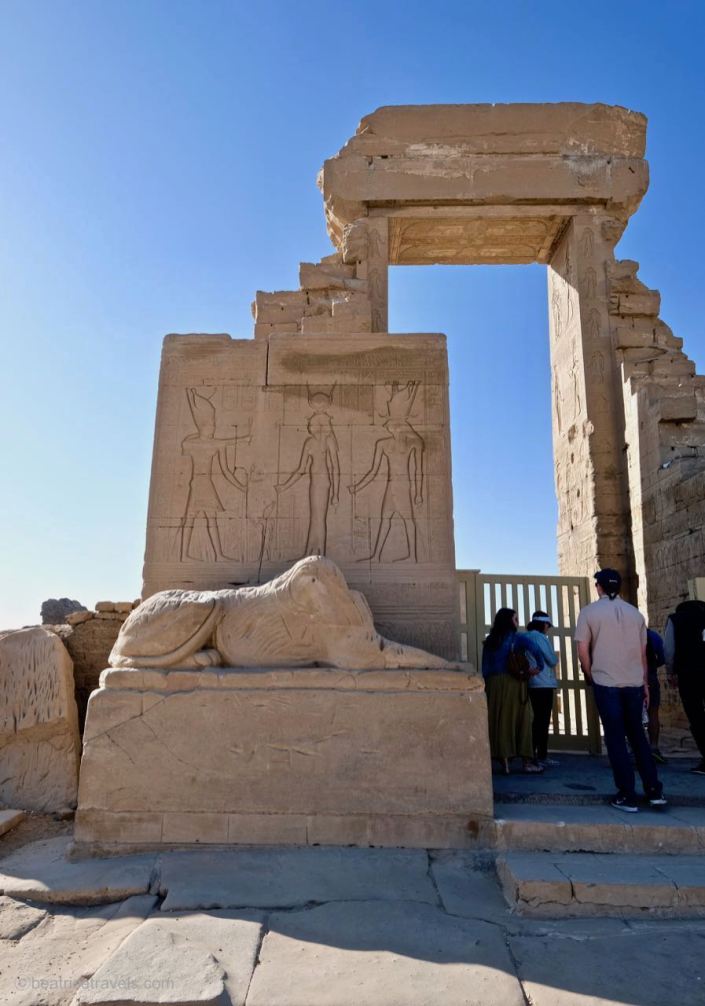 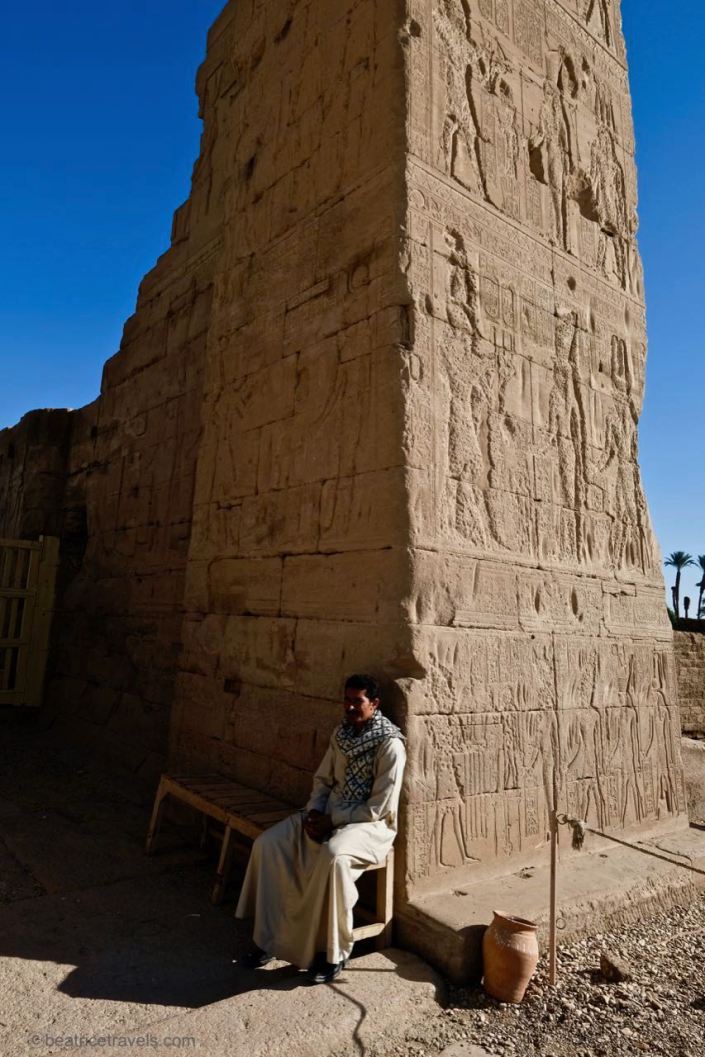 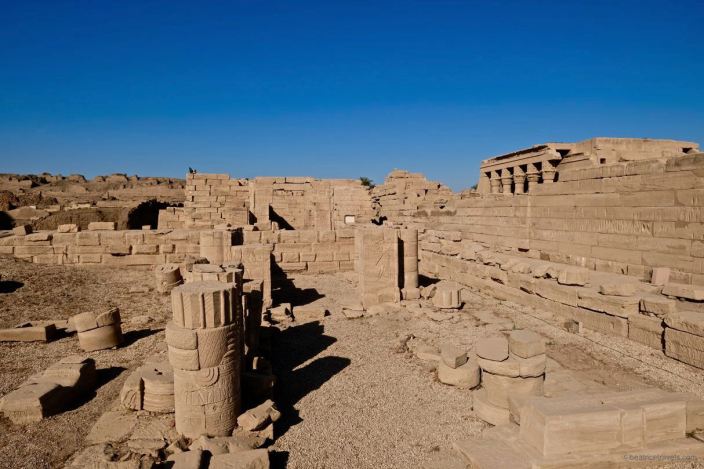 The Temple of Hathor was largely built during the reign of Ptolemy XII and Cleopatra VII with later additions made during the Roman period.  My favorite part of this temple is the outer hypostyle hall.  The gigantic columns here are topped with capitals in the form of the head of Hathor surmounted by a sistrum which is her sacred musical rattle and a symbol of joy and celebration.  On the Astronomical Ceiling is the relief of Nut with her dress as the sky.  Between her legs is the birth of the sun which she swallows at night and births again with Hathor being illuminated by the sun’s rays. 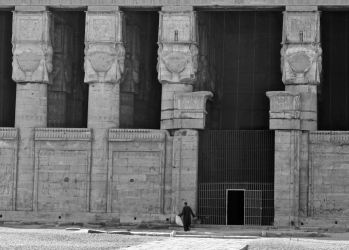 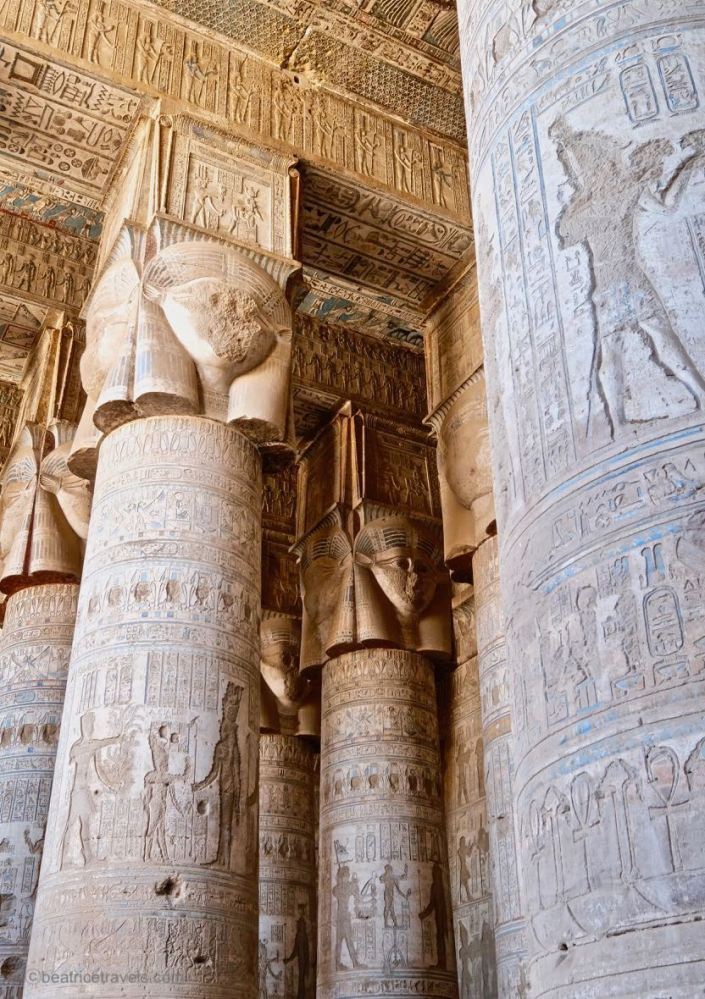 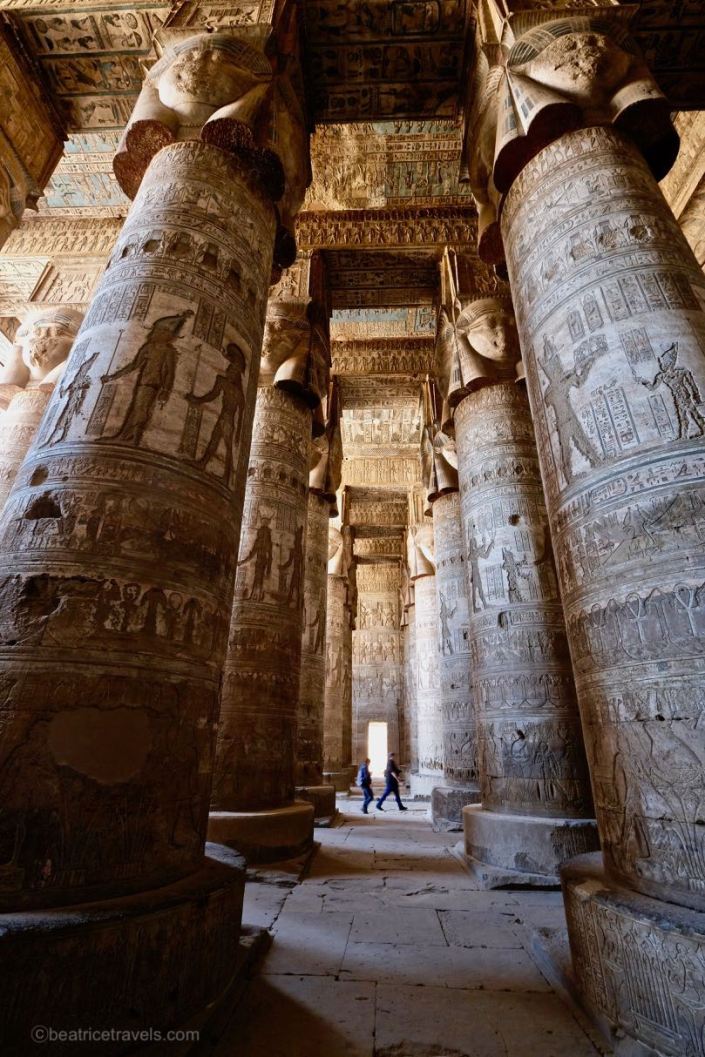 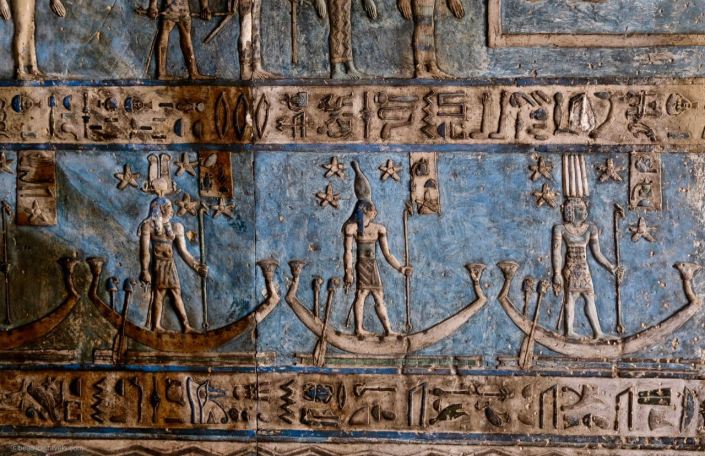 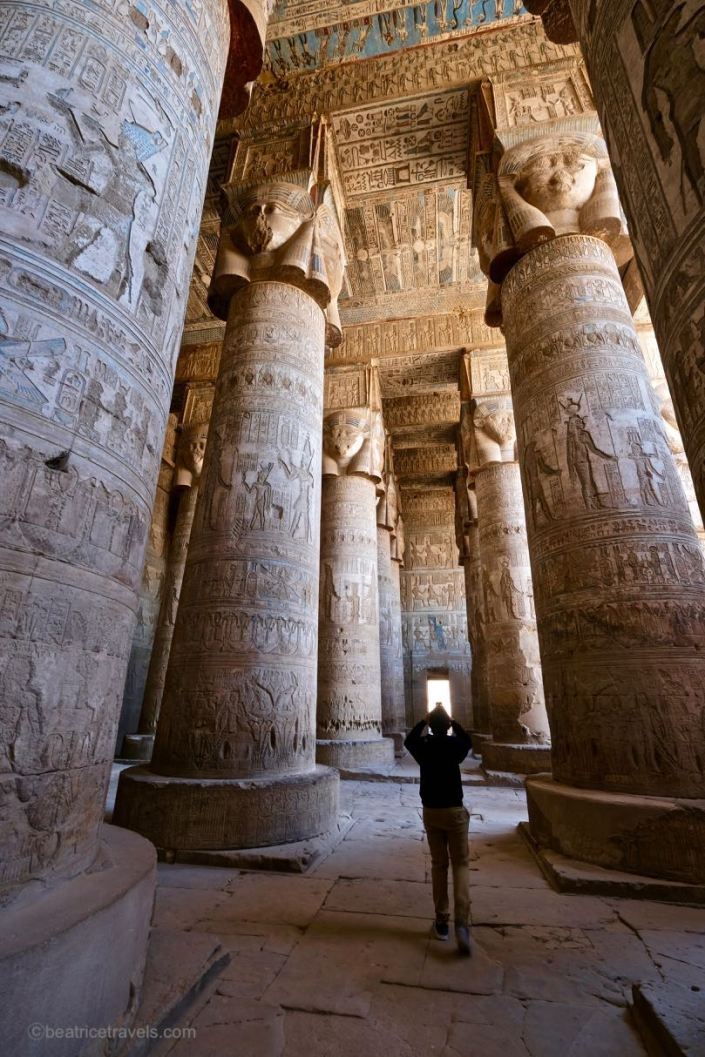 From the hypostyle hall is the inner hall known as the Hall of Appearances with six Hathor columns where the statue of the Goddess Hathor appeared from her sanctuary for ceremonies.  Further in is a small chamber housing the sanctuary of the goddess Hathor with a 2-meter high statue.  Inside are murals depicting the king offering to the goddess.  There are eleven other chapels dedicated to the other deities.  Beneath the central core are 14 crypts which can be accessed by hidden trapdoors and were believed to store the treasures of the temple.  The entrance is quite narrow and at places I had to crawl to enter.  There is one relief here known as the Dendera Light because some suggest that it is a representation of an ancient lightbulb.  The relief depicts a djed pillar and a lotus flower spawning a snake within. 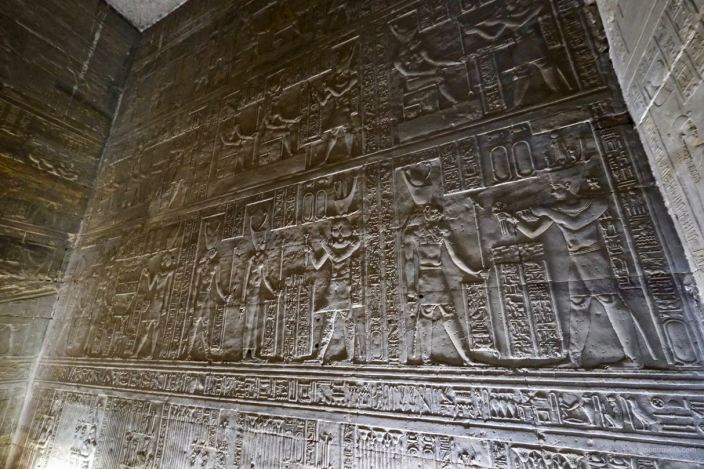 There are stairs leading to the roof of the temple where there is a small temple to greet the rising sun, the Chapel of Osiris, and the birthing temple.  The stairwell going up to the roof is a spiral, just as a bird would ascend, while the corridor to come down is straight, just as a bird would dive.  During the New Year festival, the soul or ba of Hathor would emerge from the crypt beneath the temple and be carried up the western spiral staircase to the roof for her to await the first light of the dawn of the New Year and symbolically be revitalized by the Sun.  Once revitalized by the sun, she was carried down via the eastern straight staircase back to the crypt.  Here on the ceiling of the portico of the Chapel of Osiris is the Dendera Zodiac with the images of Taurus, the bull, and Libra, the scales.  This relief which is a replica is believed to depict the complete map of the ancient Egyptian sky with the original on display at the Louvre Museum in Paris. 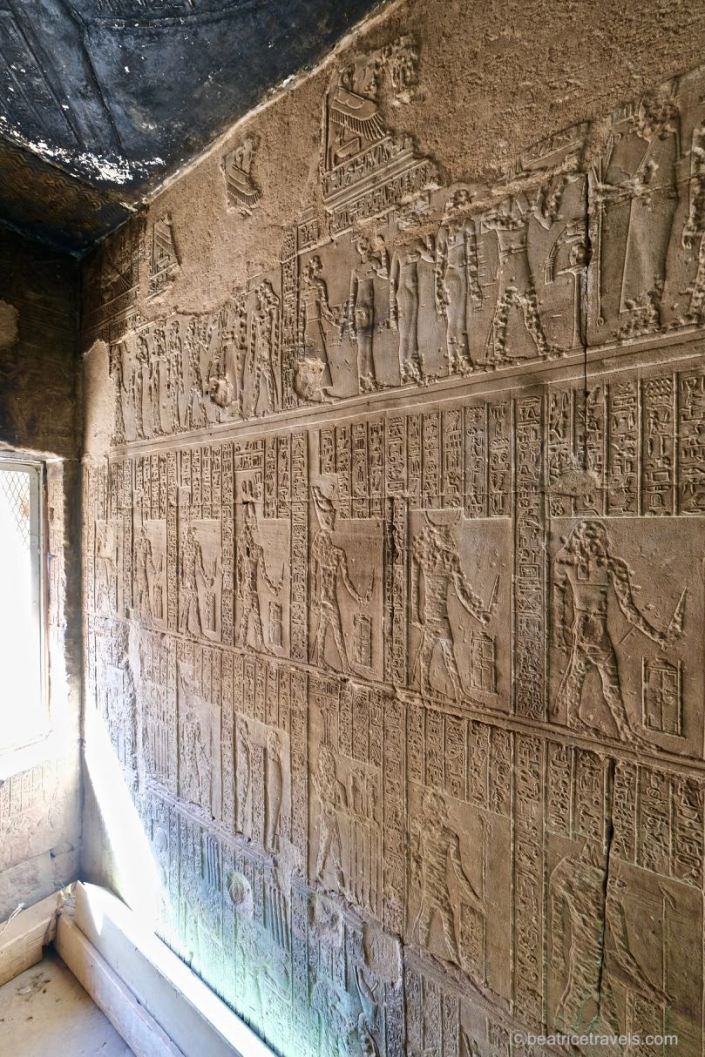 Although built by non-native rulers, the Temple of Hathor was built according to the traditional Theban architectural style.  Also similar to the native Egyptian pharaohs, these rulers used the temples to show the people their piety towards the gods of Egypt.  Inside the hypostyle is a fresco of Emperor Nero offering a model of the mammisi to the goddess and outside of the rear wall are images of Cleopatra VII and her son Caesarion by Julius Caeser.  On the rear wall is a large False Door with an emblem of Hathor which pilgrims rubbed and scraped at in order to become closer to their goddess.  There is a hearing ear shrine here where Hathor can hear the prayers of those commoners who were not allowed to enter the temple.

Egyptian birth houses or mammisis are an important feature of many Late Period and Ptolemaic temple complexes where the reliefs depict scenes of nativity and bringing up of the king as the child of the gods.  Here at Dendera, it is positioned at the front of the complex and was quite intricately decorated with reliefs of the births of gods and the pharaoh. 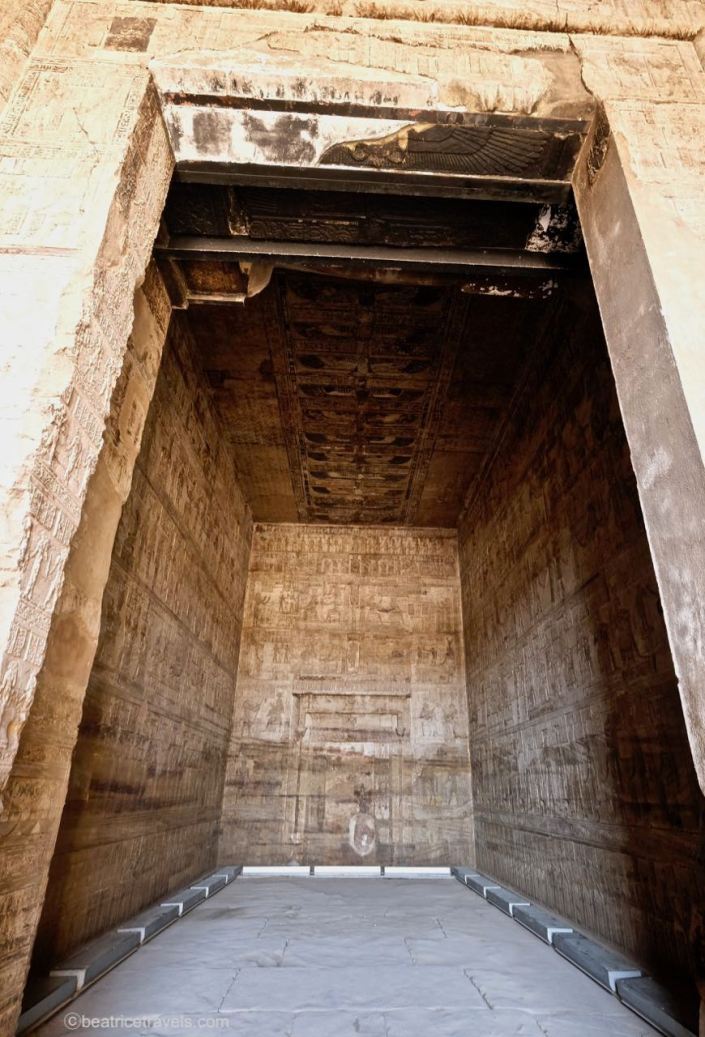 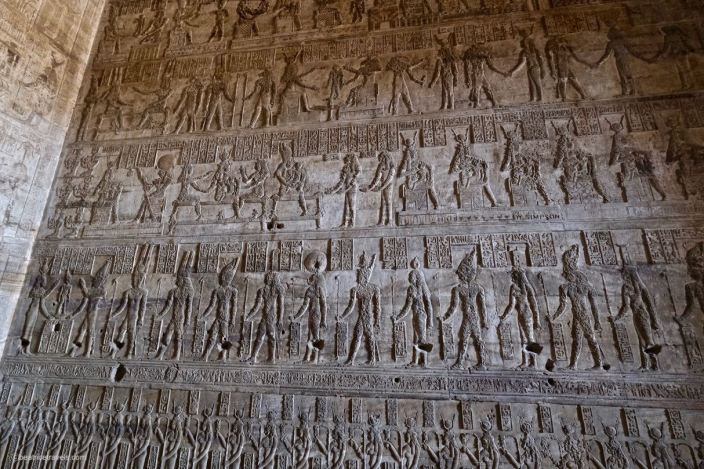 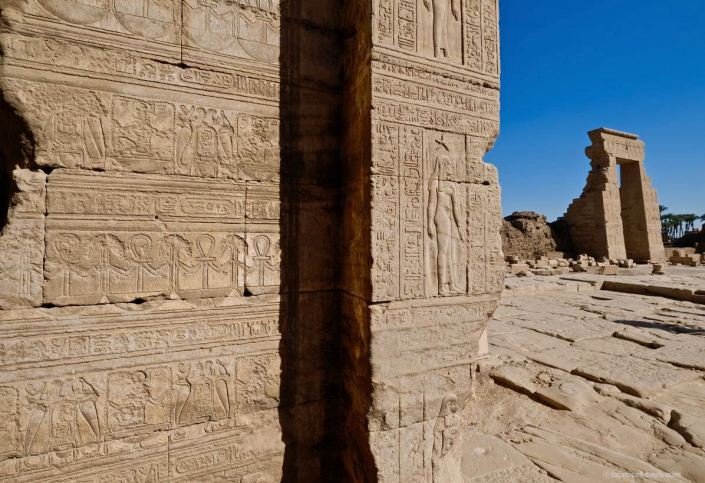 Dendera is by far one of my favorite temple complexes in Egypt.  It laid buried under the sand and was left untouched by time for over two thousand years.  Craning your neck to take in the myths and legends of the astronomical ceiling with the Hathor faces on top of the giant columns gazing down at you is like stepping into an ancient Egypt time machine.  If only the walls could speak, the stories they would tell.   Take a moment here and imagine the priests busying around, preparing offerings, and bringing the statue of Hathor’s soul up from the crypt to the roof for it to be rejuvenated by the first rays of the sun on the first day of the Egyptian new year thousands of years ago.  It is truly a privilege to visit such a beautiful and well preserved temple and I will definitely try to come back someday.

From Luxor we set sail towards Esna and Edfu.  Stay tuned!