Today we disembark our cruise and take a short 45-minute flight to Abu Simbel.  The flights are quite busy so make sure you book way ahead of time.  Otherwise it is going by police-escorted convoys taking 3-4 hours drive.  With the flights, you will have about 90 minutes at the temple sites before having to return to the airport 10 minutes away for your flight back to Aswan.  Abu Simbel is a set of twin temples cut into a rock cliff to celebrate the victory of Ramses II at the Battle of Kadesh in 1274 BC.  Like the Temple of Philae, this complex had to be relocated because of the building of the Aswan High Dam and the subsequent creation of the artificial Lake Nasser.  Between 1964 and 1968, the temple complex was painstakingly dismantled and reassembled 65 meters higher and 200 meters back from the river.  The larger temple at Abu Simbel called Temple of Ramses II was dedicated to Ra-Harakhty, Ptah, and Amun personified by Ramses II and has four seated colossi of Ramses II on the facade.  The smaller temple was constructed for Nefertari, Ramses II’s favorite wife and dedicated to the goddess Hathor.

The larger Temple of Ramses II is 35 meters wide and 30 meters high with four 20-meter high seated statues of Ramses II on his throne wearing the double crown of Upper and Lower Egypt.  There is a frieze with 22 baboons, hands raised, worshipping the sun.  At the foot of these colossi are statues depicting Nefertari (Ramses II’s wife), Mut-Tuy (Ramses II’s mother), and his sons and daughters. 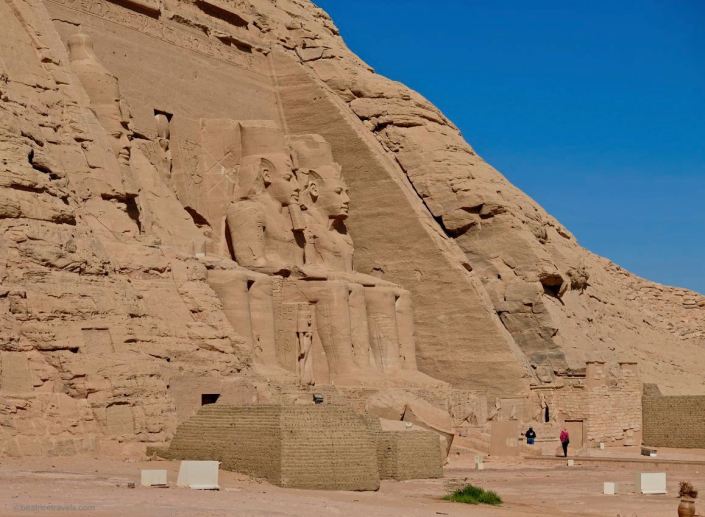 The hypostyle hall here has eight Osirid pillars depicting Ramses II deified as Osiris, the god of the underworld.  The walls are decorated with reliefs depicting Ramses II and Nefertari paying homage to the gods and Ramses II’s great victory at Kadesh.  The most famous being Ramses II on his chariot shooting arrows at his fleeing enemies.  The majestic statues on the left wear the crown of Upper Egypt and those on the right wear the double crown of Upper and Lower Egypt. 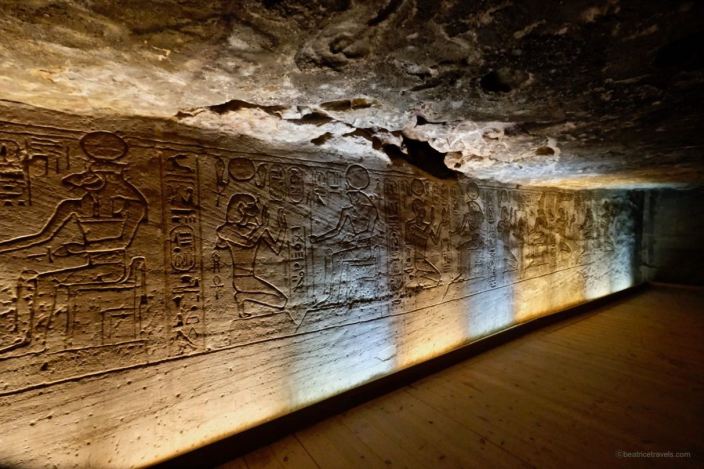 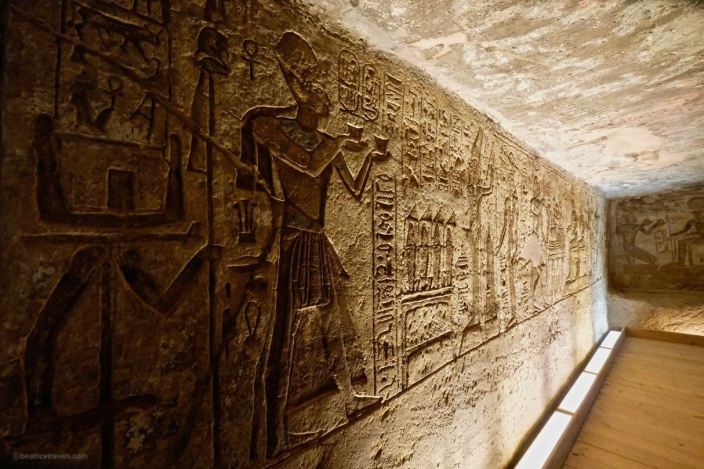 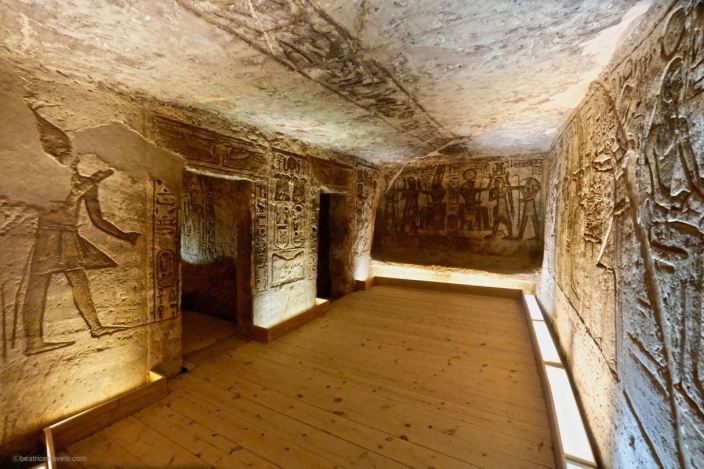 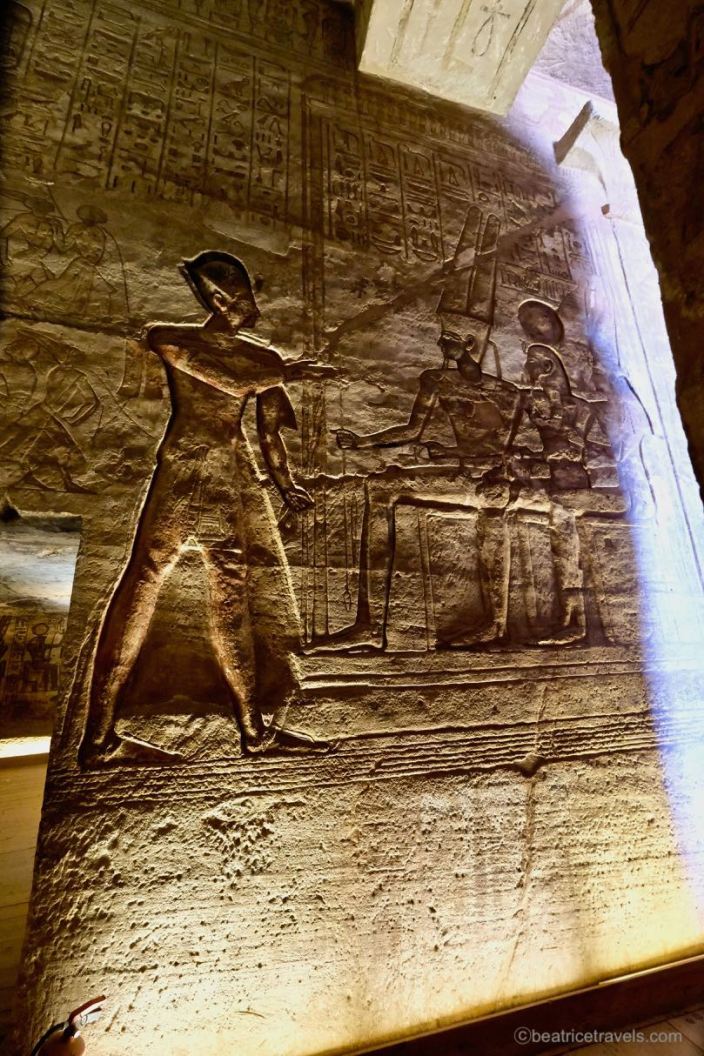 Behind the hypostyle hall is another pillared hall with scenes of Ramses II and Nefertari making offerings to the gods and the sacred boats of Amun and Ra-Harakhty.  Inside the inner sanctuary is a black wall with sculptures of Ra-Horakhty, the deified Ramses II, Amun, and Ptah.  What is interesting is that the temple was built in such a way that the rays of the sun will penetrate into the inner sanctuary and illuminate the statues of Ra-Horakhty, Ramses II, and Amun, leaving Ptah in the shadow because he was the god of darkness and the underworld.  This solar alignment occurs twice a year, once on Feb 22 (the date of Ramses II’s birth) to celebrate the cultivation season, and then again on Oct 22 (Ramses II’s coronation) to celebrate the flooding season.  It is amazing that even though the temple has been moved, this solar alignment still occurs as it has for the past three thousand years! 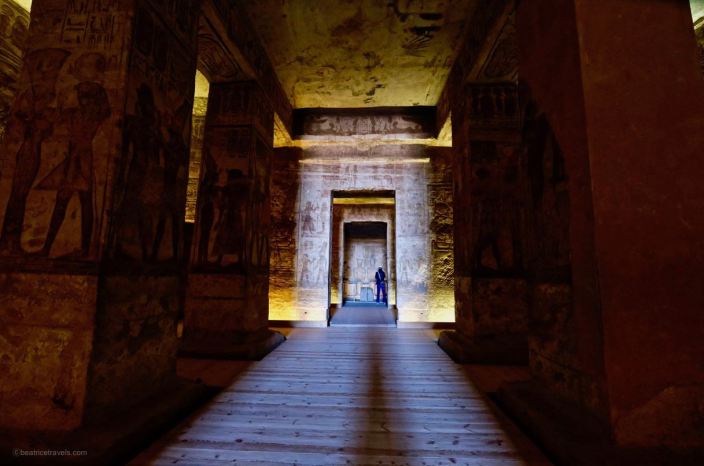 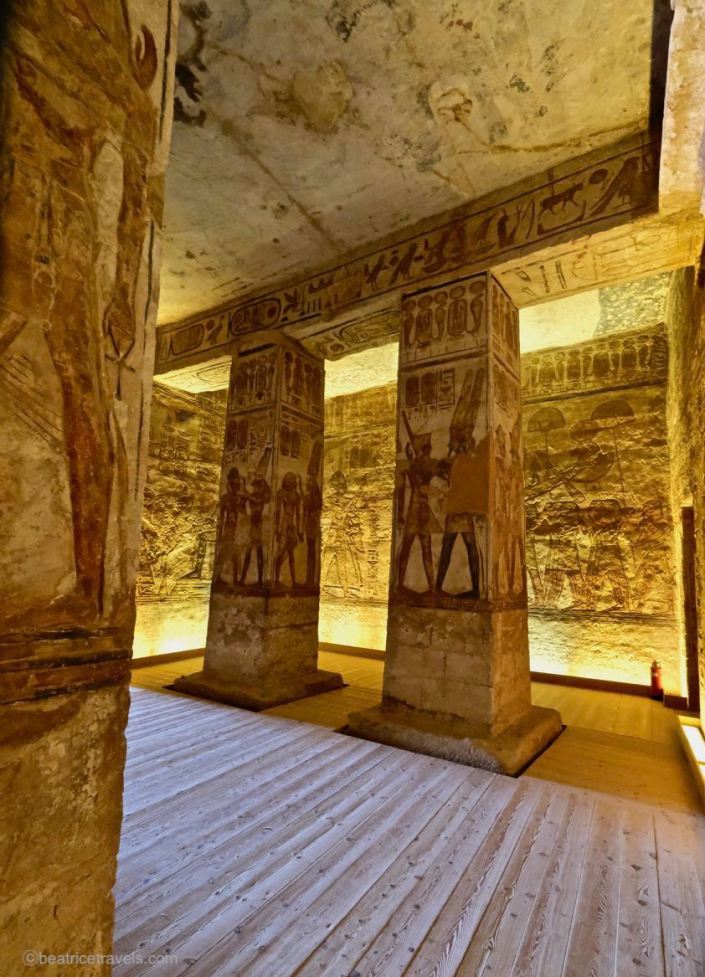 About 100 meters away from the Temple of Ramses II is the Temple of Nefertari dedicated to the goddess Hathor and to Nefertari, Ramses II’s chief and favorite wife.  It was only the second time in ancient Egyptian history where a temple was dedicated to a queen.  The first being Akhenaten (1353-1336 BC) dedicating a temple to his wife, Nefertiti.  There are three colossi on each side of the entrance facade, four of Ramses II and two of Queen Nefertari.  They are all 10 meters tall which is remarkable because very rarely are statues of queens the same size as the kings.  Normally, statues of queens were never taller than the king’s knees as can be seen in the Temple of Ramses II.  Inside the hypostyle hall here are pillars with scenes of Nefertari playing the sistrum with the gods and capitals of Hathor.  The reliefs on the walls depict Ramses II and Nefertari making offerings to Hathor and the gods.  Inside the inner sanctuary is a relief depicting Ramses II and Nefertari presenting papyrus plants to Hathor in the form of a cow on a boat. 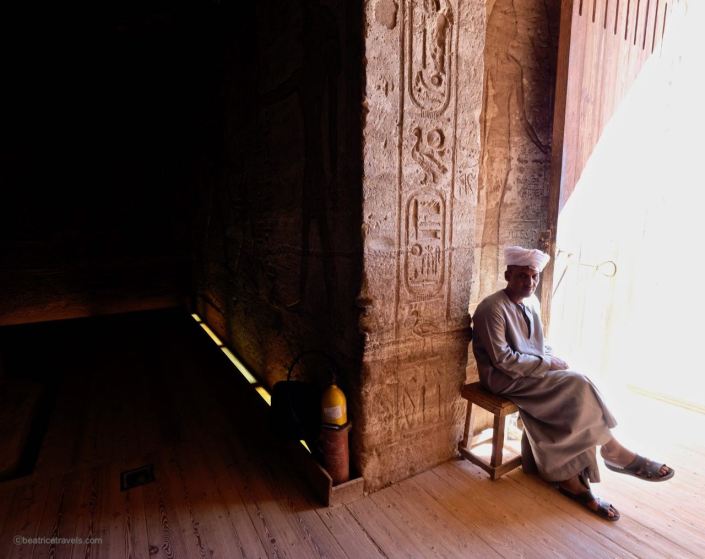 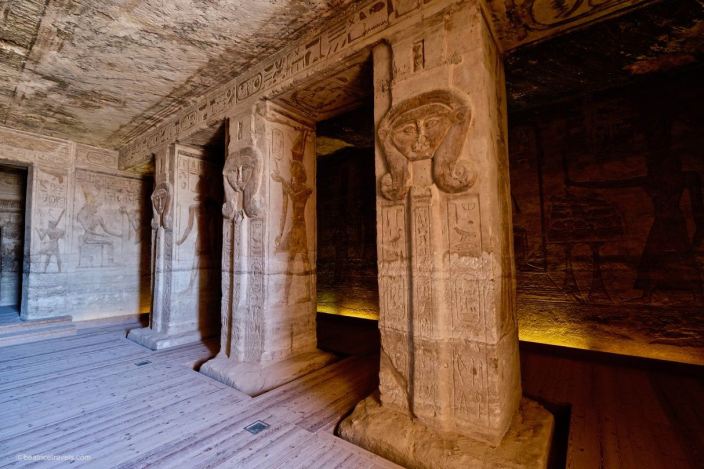 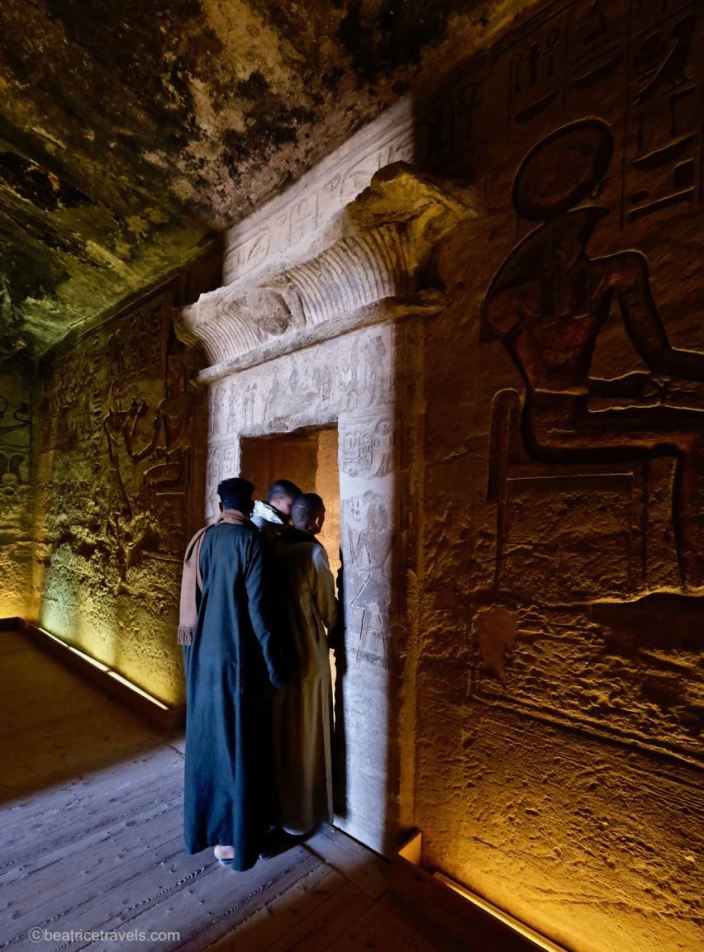 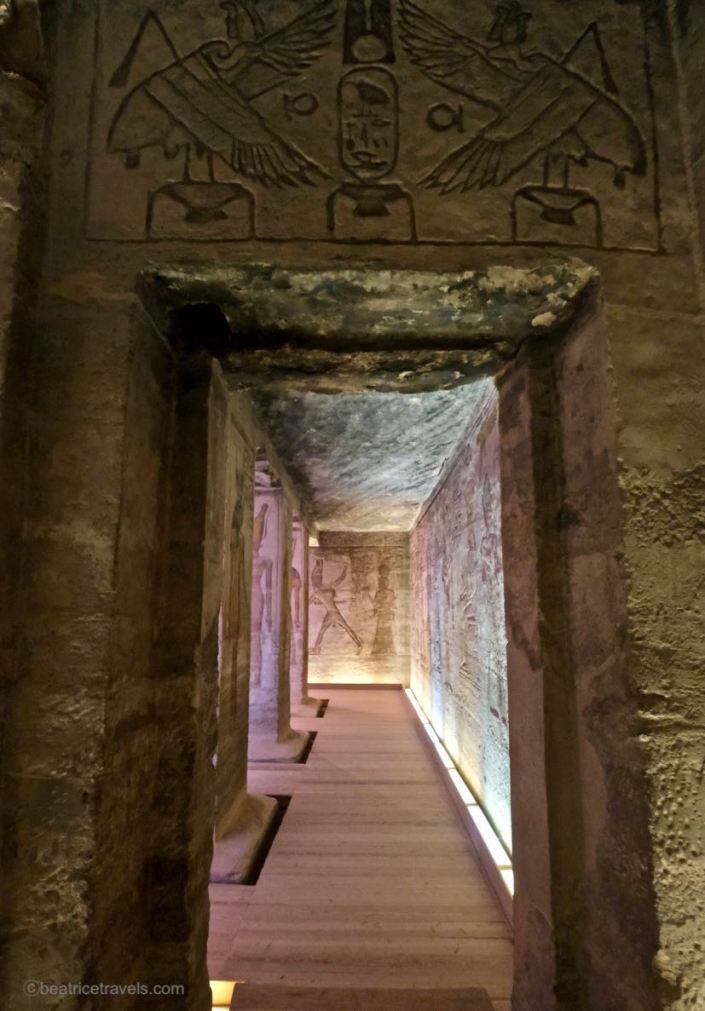 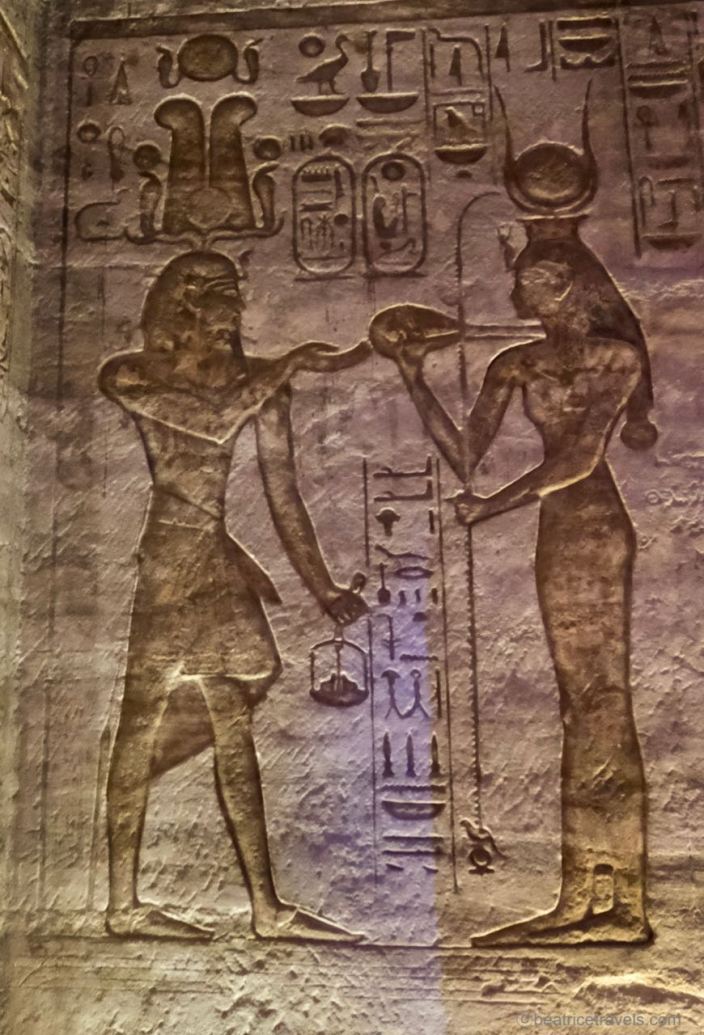 Abu Simbel is definitely my favorite Egyptian temple and the highlight of my trip.  After our brief visit, we returned to the airport for our flight back to Aswan and then Cairo.  In the blink of an eye, my Egyptian adventures came to an end.  I have always wanted to visit Egypt but had to cancel twice before due to the political instability.  Being there inside these massive structures, craning my neck to take it all in, is truly an indescribable experience.   Egypt was everything I had expected and more.  Until next time!