Did you know that there are actually more pyramids in Sudan than there are in Egypt?  Even though much smaller in size, there are so far over 350 pyramids discovered in Sudan and serve as tombs for the kings and queens of Napata and Meroe.  The Nubian pyramids range from 6 to 30 meters high but have much smaller foundations than their Egyptian counterparts resulting in tall narrow structures.  These Nubian pyramids are inclined at 70º whereas the Egyptian ones are usually inclined at angles between 40-50º.  Like the Egyptians, the Nubians were mummified and laid to rest in wooden sarcophagi together with jewellery and weapons.  The necropolis for the Nubian kings and queens of the ancient city of Napata had a large number of pyramids, most of them lost to the desert, looted and destroyed by treasure hunters, or demolished by the nearby villages for building materials.  These pyramids are located in three main areas: in El Kurru, near the holy mountain Jebel Barkal, and in Nuri on the opposite bank of the Nile.

El Kurru was one of the royal necropolises situated near the ancient city of Napata not far from the holy mountain Jebel Barkal.  The Nubians used to be buried in the Nubian-style tumuli until the rise of the Napatan dynasty of Black Pharaohs who adopted the Egyptian pyramids.  Most of the pyramids discovered date to the Kushite period from 795 BC to about 315 BC.  From the time of King Piye, pyramids were built over the royal tombs hewn into the rock.  Nowadays, most of the pyramids are long gone, having been demolished by local villages using the sandstone for building houses.  El Kurru is important because both the first Kushite Black Pharaoh, King Piye, and the last, King Tanutamani were both buried here.  King Piye attacked Egypt in 720 BC and captured Thebes and conquered the rest of Egypt and became the first Kushite pharaoh to rule Egypt.  Following his death, his son Taharqa, assumed the throne until 671 BC when the Assyrians invaded Egypt and defeated the Kushites.  Taharqa’s nephew and successor, King Tanutamani managed to briefly defeat the Assyrians and reclaim Egypt.  However, he was soon defeated by the Assyrians ending the Kushite rule over Egypt forever. Tanutamani only ruled Nubia but not Egypt from then on until his death in 653 BC.

There are two tombs in El Kurru dating from the 7th century BC that can still be entered down some stairs cut into the rock with partially collapsed pyramids on top.  One is that of King Tanutamani and the other of his mother, Queen Qalhata.  We visited the tomb of Tanutamani and inside are wonderfully preserved wall paintings and hieroglyphs.  The ceiling is painted in blue with yellow stars similar to the ones in Egypt and the walls depict Tanutamani making offerings to the gods. 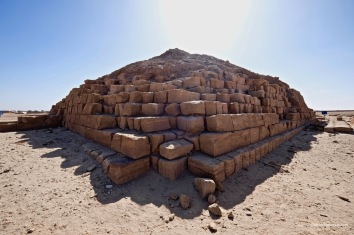 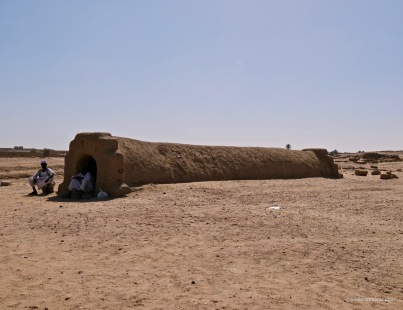 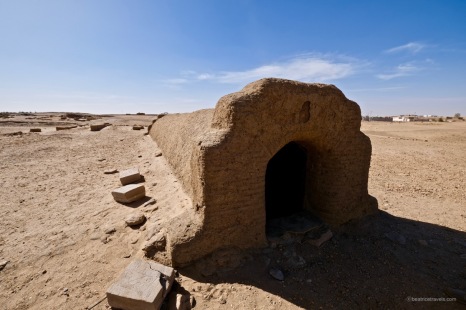 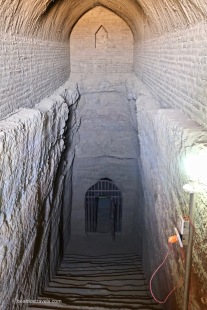 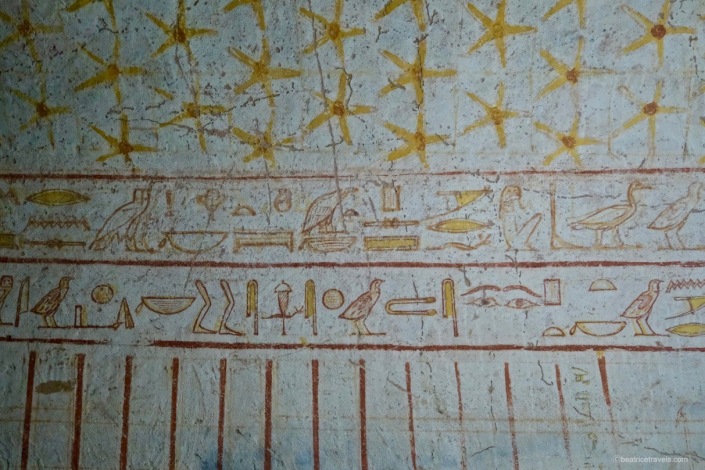 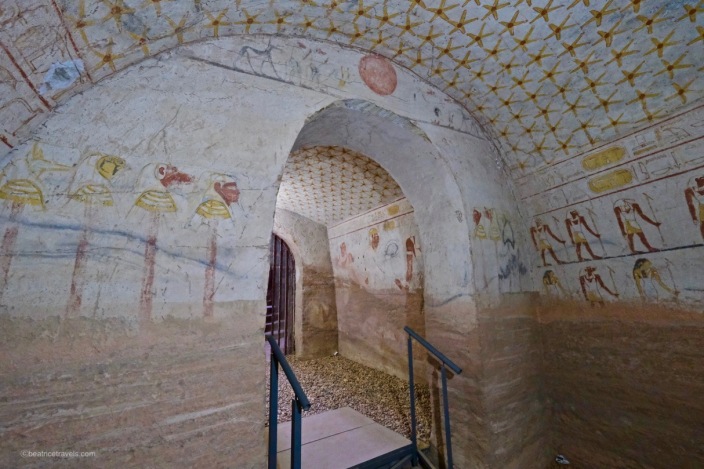 The area around the holy mountain Jebel Barkal also served as a royal cemetery.  There remains a small cluster of Nubian pyramids, although much smaller than their Egyptian counterparts, are nonetheless impressive.  We hiked for about 10 minutes (which the guide said was record time) to reach the top of Jebel Barkal for panoramic sunset views of the surrounding desert, local villages, the Nile, and of course the pyramids.  The shutter of my camera did not stop clicking as I sat on top of the mountain completely mesmerized by the dreamy feel of this small group of pyramids floating in the sea of sand as the sky turned hazy orange. 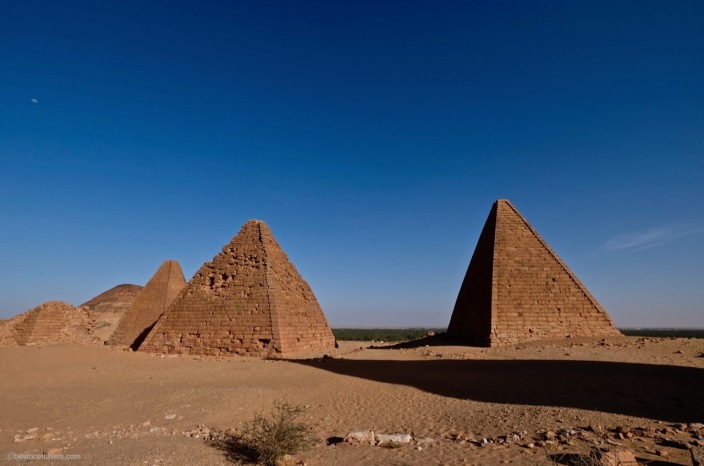 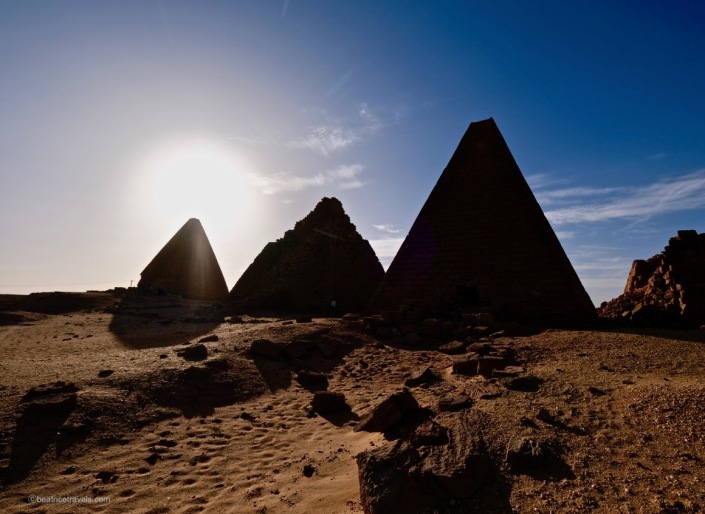 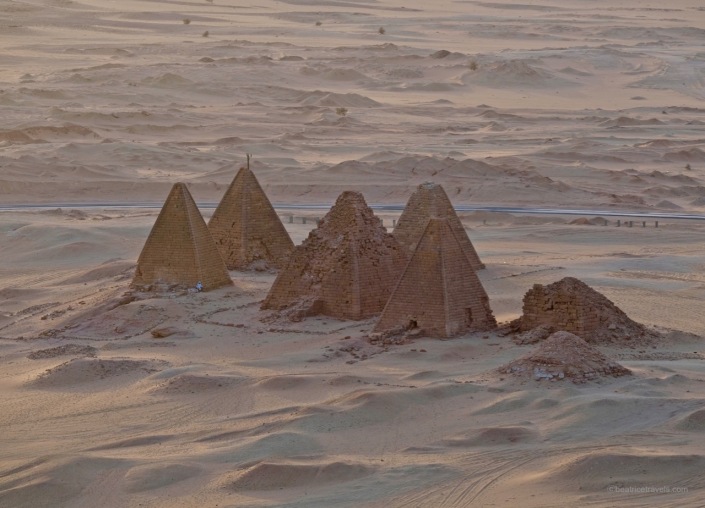 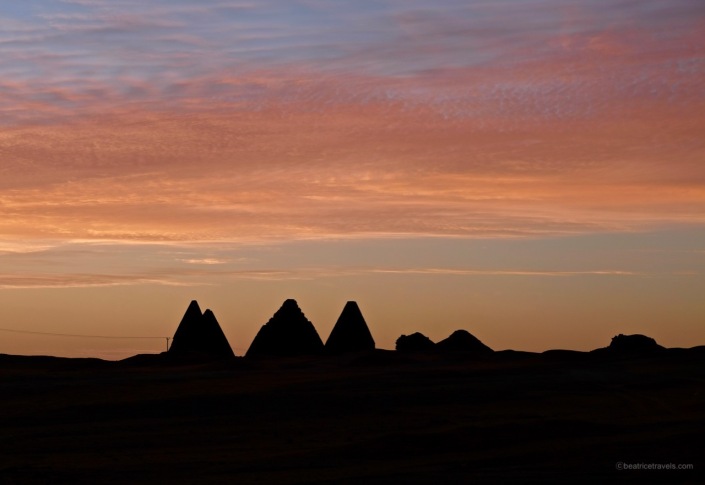 Another royal necropolis of Napata can be found in Nuri across the Nile.  Nuri was the necropolis for 21 kings and 52 queens and princes with the oldest and largest pyramid being that of the 25th Dynasty Black Pharaoh Taharqa.  Taharqa further expanded the borders of his empire and resided in Memphis and Thebes (modern day Luxor) in Egypt until his death in 664 BC.  He was buried in Nuri and his pyramid was believed to be the first one built here and led to subsequent burials in Nuri instead of El Kurru.  About 20 pyramids still stand today in Nuri. 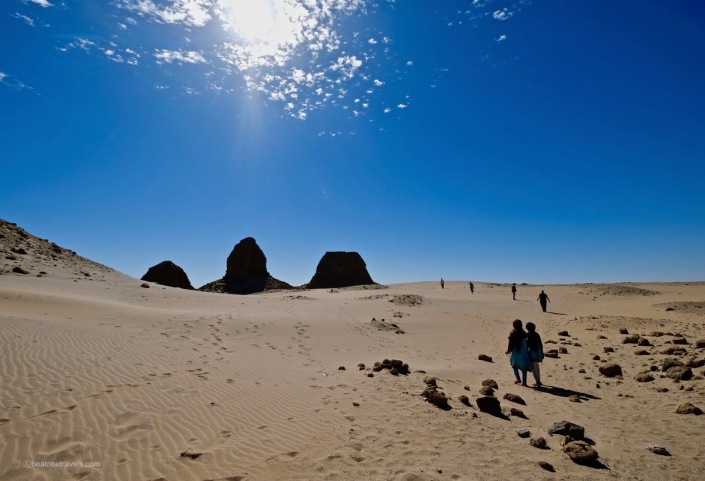 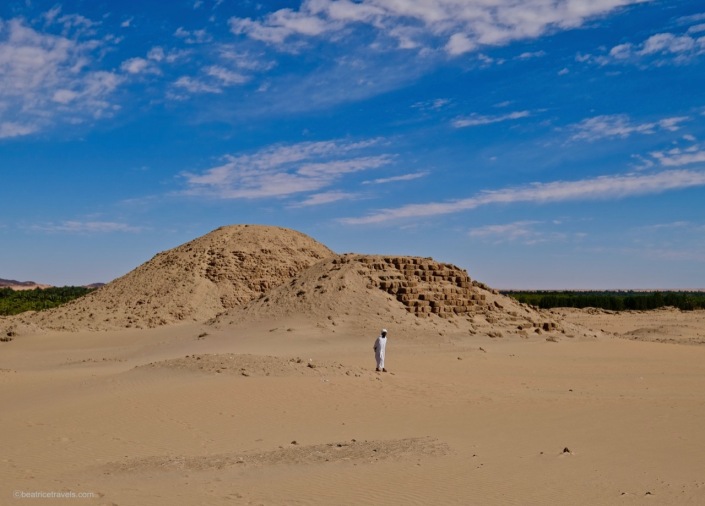 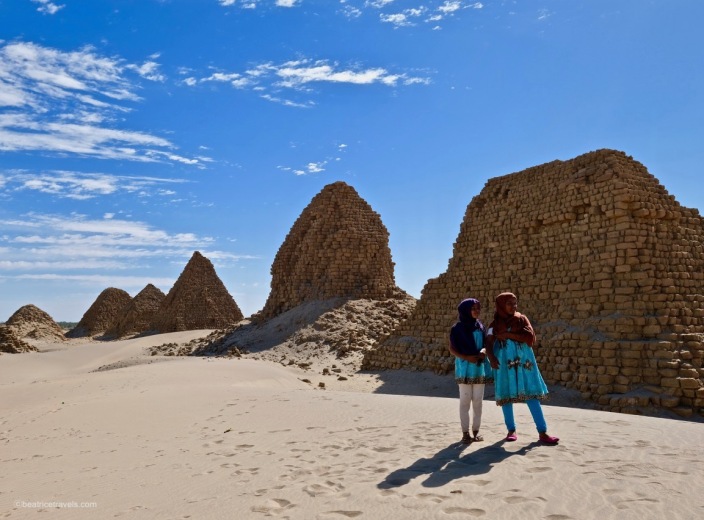 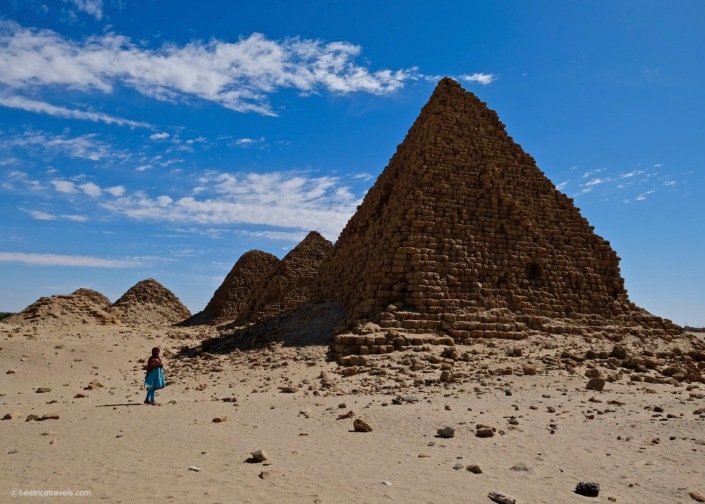 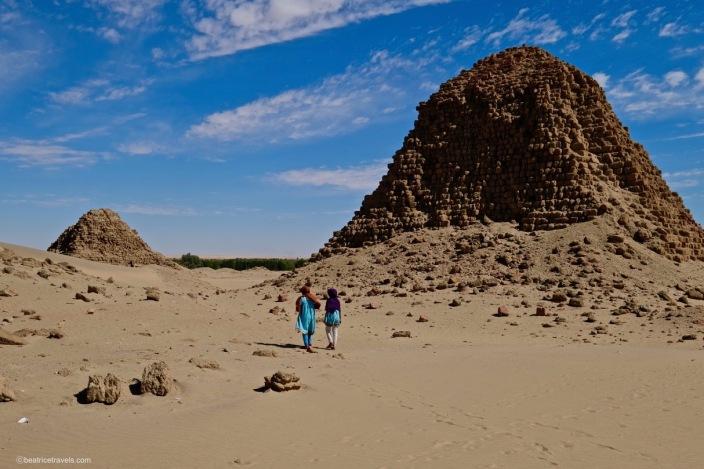 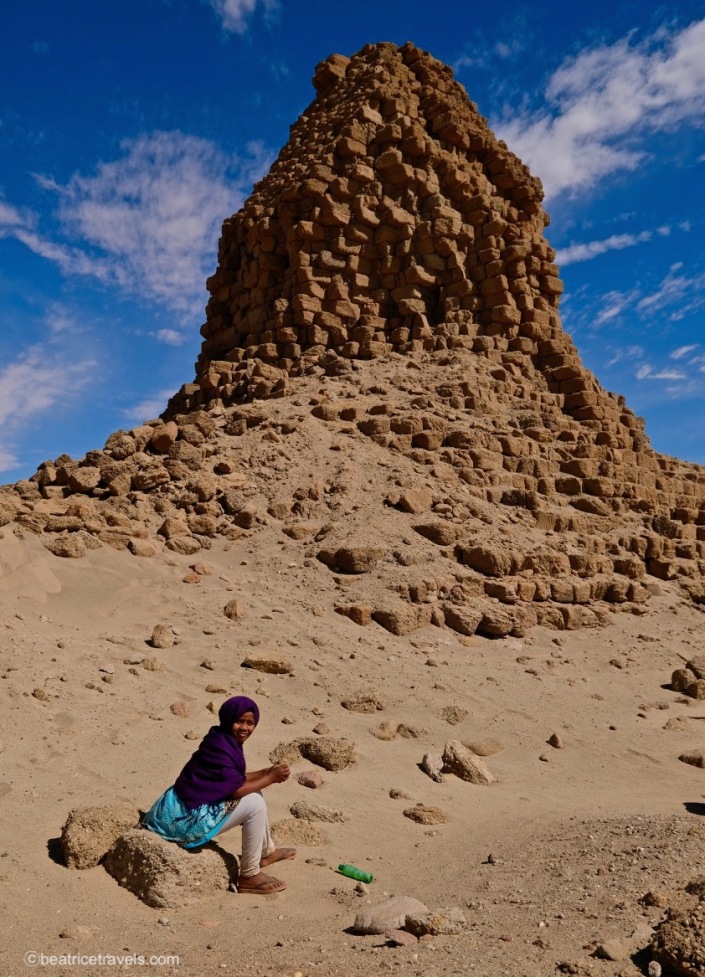 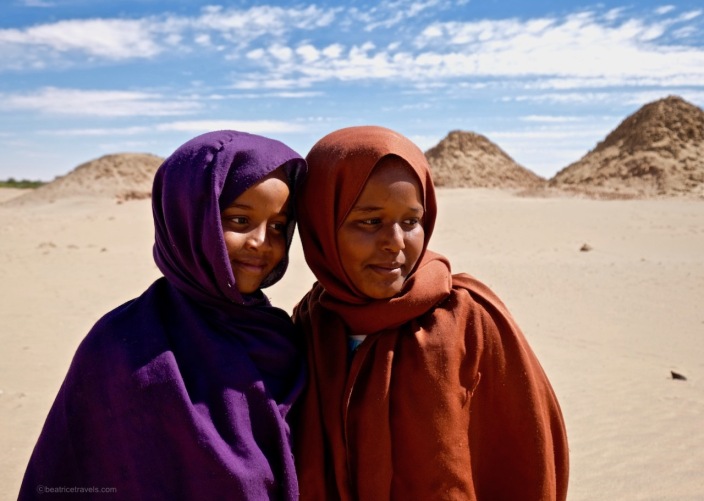 Next post will be on Tombos and Kerma which was the capital of the ancient Kingdom of Kerma predating the Kushite black pharaohs by over a thousand years.  Stay tuned!