I have always been curious about Ohrid, the city nicknamed the “Jerusalem of the Balkans” and so since I am only about 2.5 hours away in Tirana, Albania, I decided to do a day trip to Ohrid in North Macedonia.  The Republic of North Macedonia is one of the successors of the former Yugoslavia from whom it declared independence in 1991.  Like its Balkan neighbors, it has been ruled by several different empires and their respective religious beliefs.  During the Kingdom of Yugoslavia, Ohrid was at first an independent district and then became part of other provinces before coming under Bulgarian rule during WWII.  Since the declaration of independence, Ohrid is part of the Republic of North Macedonia.

First stop after crossing the border into North Macedonia is to the Monastery of St Naum or Sveti Naum established in 905 by St Naum himself.  St Naum of Ohrid was a medieval scholar who spread Christianity among the Slavic people of the area.  St Naum was known as a living saint and performed many miracles.  He was said to have healed the death and the mute and the handicapped.  It was said that even the Muslims from the nearby Albanian town of Pogradec would cross the border to seek help from St Naum.  The original monastery was destroyed by the Ottomans and rebuilt in the 16th century into a multi-domed Byzantine-style structure that we see today.  There is a beautiful iconostasis from 1711 and frescoes from the 19th century.  St Naum died in 910 and was buried here inside the monastery.  Legend has it that you can still hear St Naum’s heartbeat if you bring your ear to his stone coffin.  Surrounding the church complex is a garden with fountains and peacocks.  People come here to spend the day taking boat rides, eating at the restaurants, and sunbathing on the shores of Lake Ohrid. 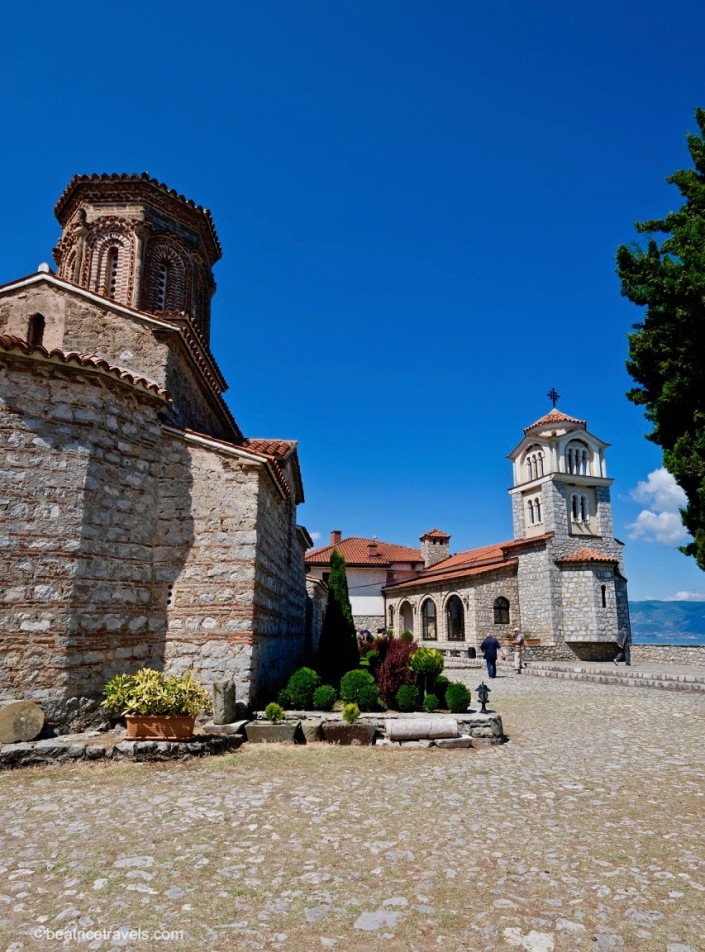 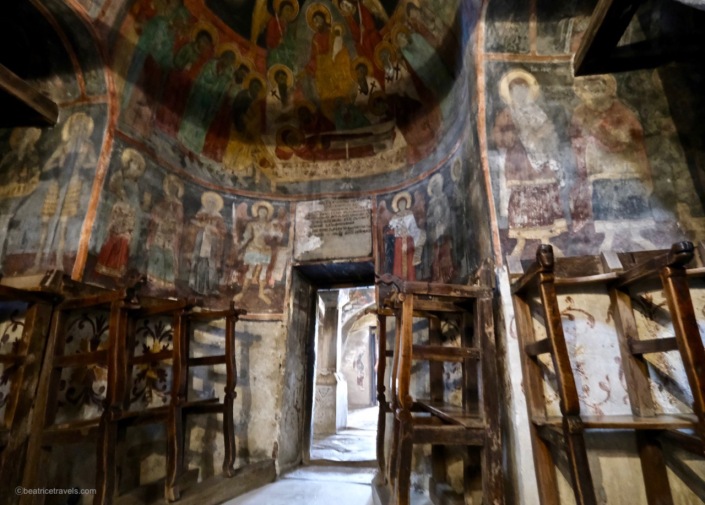 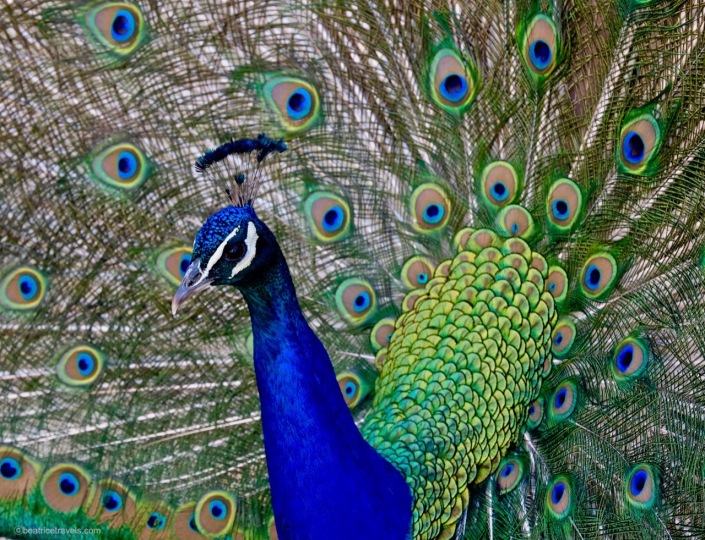 Ohrid town on Lake Ohrid is one of only 28 sites that is both an UNESCO World Heritage Site for culture as well as for nature.  Ohrid is one of the oldest human settlements in Europe with some buildings dating back to 200 BC and was nicknamed “Jerusalem of the Balkans” because in the past it was said to have 365 churches and monasteries, one church for each day of the year.  Ohrid is also known for its well preserved ancient amphitheatre where gladiators used to fight.  And Lake Ohrid is one of Europe’s oldest and deepest lakes at 3 million years old divided between Albania and North Macedonia.  Ohrid was not only a religious center, it was also a center for Slavic studies where the Monastery at Plaosnik was one of the oldest universities in the western world dating before the 10th century. 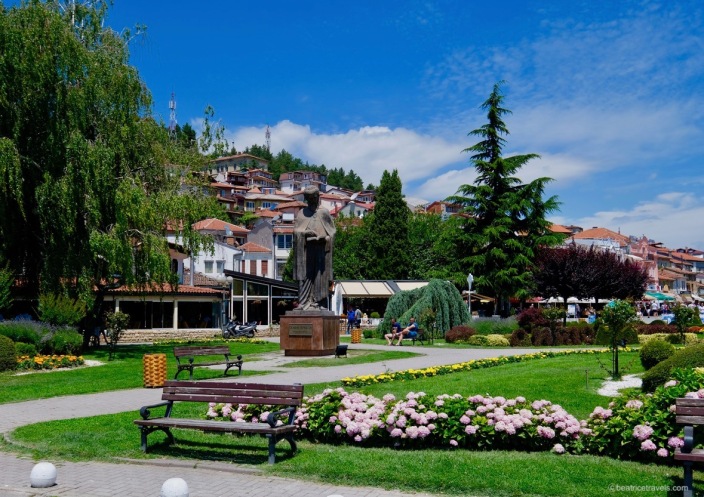 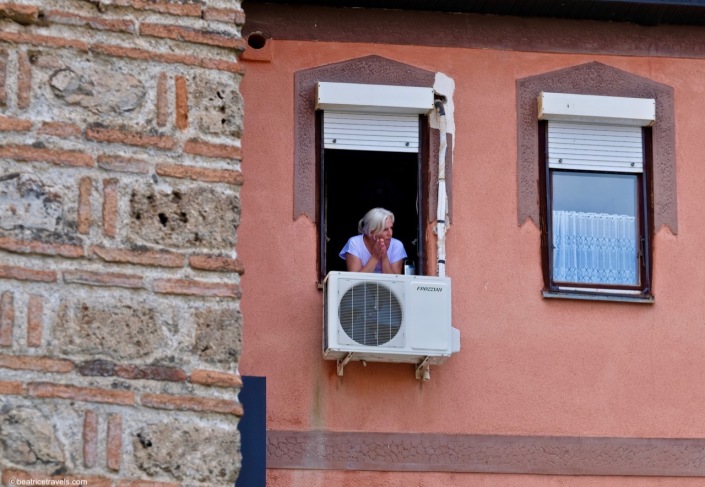 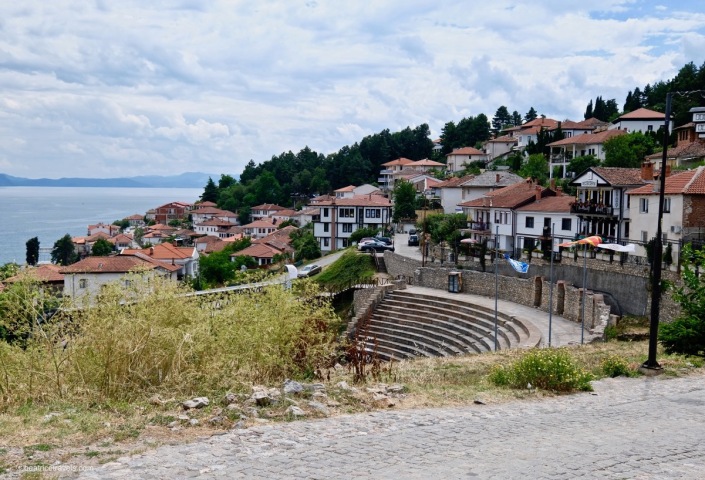 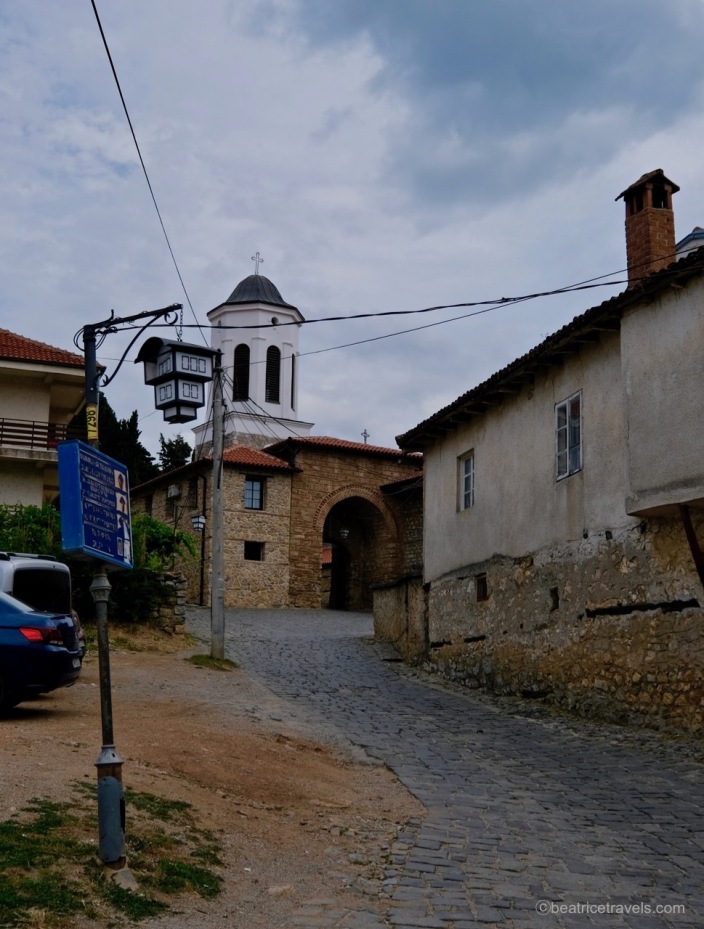 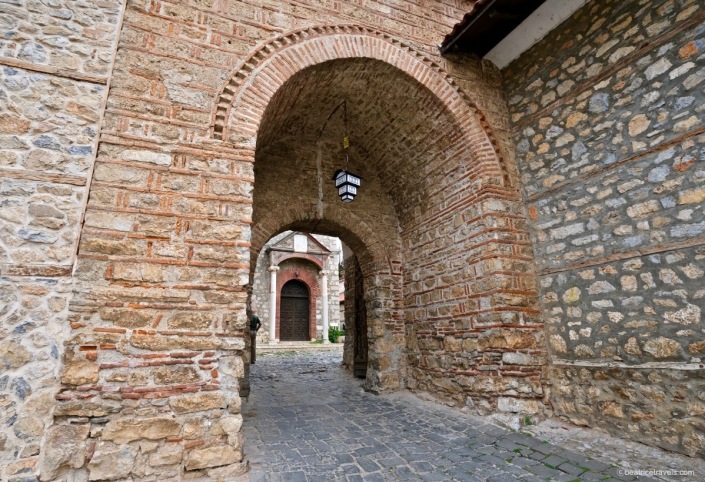 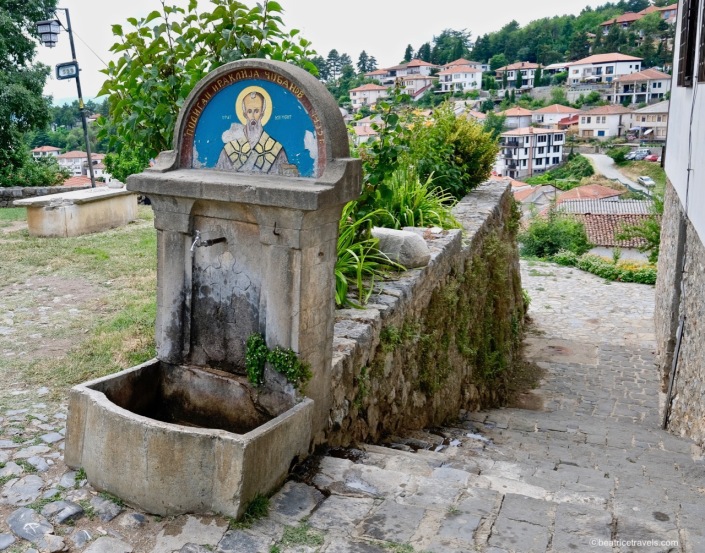 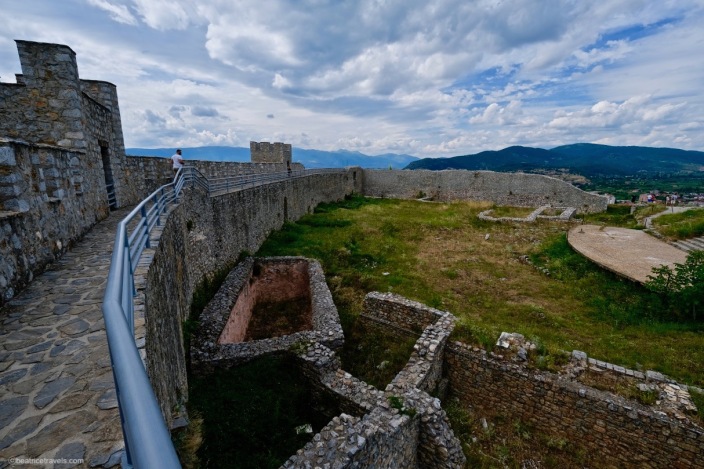 The highlight of Ohrid is the most visited and photographed church here, the Church of St Jovan at Kaneo, built at the end of the 13th century.  Kaneo is a small fishing village that can be reached by walking along the Ohrid boardwalk dotted with restaurants and bars that snakes along its shore from the old town or by descending through the woods from the fortress.  The 13th century church perched on a cliff overlooking the lake is dedicated to John of Patmos who is considered to be the same as John the Apostle.  The church is built in a mix of Armenian and Byzantine styles and has a cruciform plan.  There are fresoces in its dome and on the walls and a wooden iconostasis constructed within the church.  On the dome is a fresco of Christ Pantocrator and on the wall is a fresco of St Clement and St Eramus of Ohrid.  It is a quaint little church set in a sublime location and a must see when visiting Ohrid. 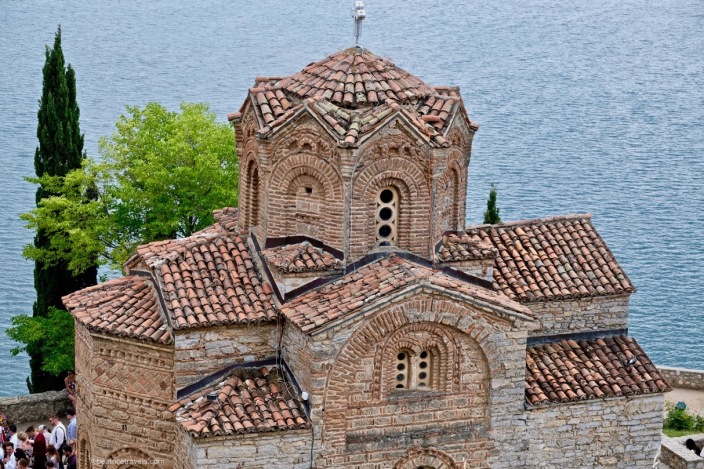 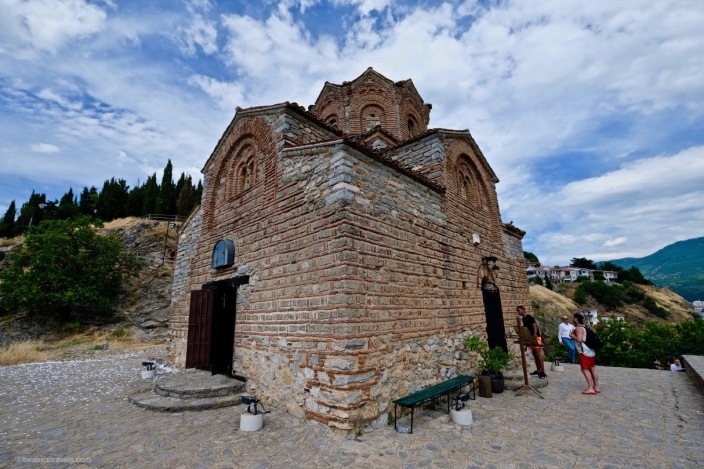 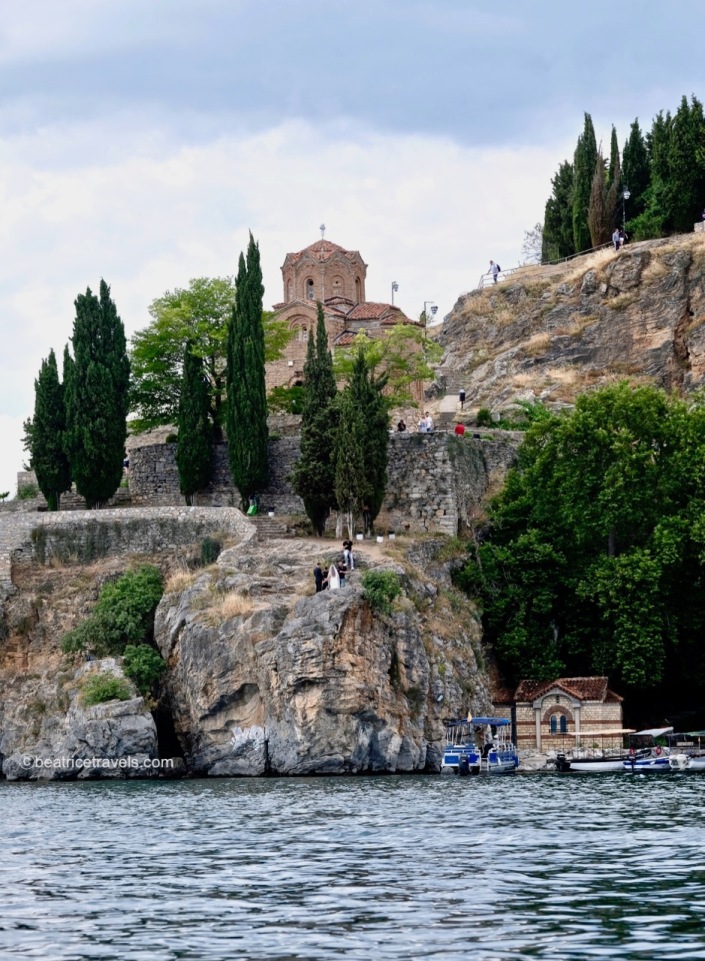 Ohrid is a very atmospheric old town built on a hill.  I can only imagine what it was like during its heyday with its 365 churches cascading down towards the lake and the medieval fortified castle keeping watch.

My Balkans trip continues to Slovenia and the next post will cover its capital Ljubljana.  Stay tuned!