From Slovenia, I travel to another Balkan state formerly part of Yugoslavia, Bosnia and Herzegovina, often known in short as just Bosnia.  Like its neighbors, Bosnia was once inhabited by the Illyrians and then settled by the Slavic people from the 6th century.  It also came under Ottoman rule until the late 19th century where the majority of the population became Muslim.  Then it became a part of the Austro-Hungarian Empire until forming part of the Kingdom of Yugoslavia after World War I.  After World War II, Bosnia was a full republic of the Socialist Federal Republic of Yugoslavia until it followed Slovenia and Croatia in seceding in 1992.  The withdrawal from Yugoslavia led to the Bosnian War between the mainly Muslim Bosniaks, the Orthodox Serbs, and the Catholic Croats.  Simply put, the war started when the Bosnian Serbs boycotted the independence referendum and formed an army to secure ethnic Serb territory.  War spread across the country with over 100,000 people killed and ethnic cleansing coming into play until it ended in 1995.  When I told my friends I’m heading to Bosnia, most of them said oh be careful because even though the war ended 24 years ago, just the name Bosnia evokes the image of war and people still think there’s something going on here.  I flew into the capital, Sarajevo, and based myself at Hotel Europe in the center of town.  Hotel Europe has witnessed all the major political events in Sarajevo’s history since the Austro-Hungarian times in 1882.  It was the first modern hotel in the city and was run by the same family until the Second World War.  From 1945-1990, the hotel was nationalized by communist Yugoslavia until it was privatized and renovated in 2008. 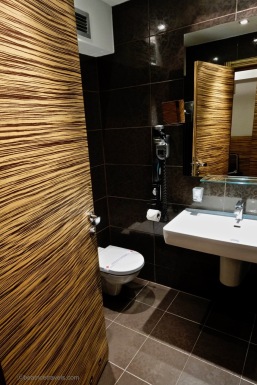 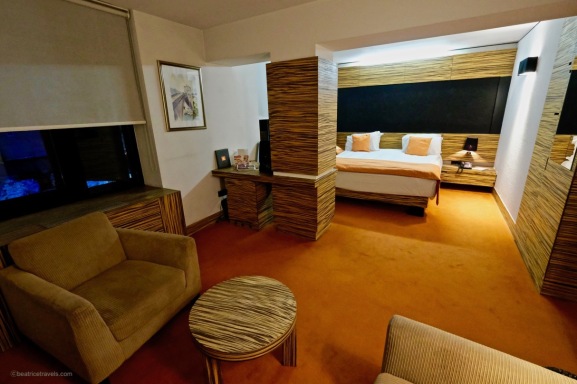 Here’s a little story how certain local practices may seem entirely normal to the locals but as a tourist I found it quite interesting.  So upon arrival at the hotel at around 10pm, I asked the receptionist if there is a store nearby for me to buy some mineral water, gum, and other supplies.  He said sure there’s one open late into the night just a few minutes walk down the road.  So off I went, I seemed to have walked all the way to the end of the road and I didn’t see anything that looked like a supermarket or convenience store.  I doubled back and saw a shop that had a locked door with a window on the door partially open and several people lining up as well as a gypsy lady waiting outside with her children.  My initial assumption was it might be some charity soup kitchen or something.  So I walked all the way back to the hotel and asked the receptionist again.  I told him I didn’t see any supermarket along the way.  Then I asked him if it could be the one that appeared closed with a small window in the door.  He said that is the one.  All you have to do is tell the shop person what you need and he will bring it to the window, then you hand him the cash and he hands you the goods.  He said all the supermarkets that open late operate like that mainly for people to buy some drinks and cigarettes.  I have traveled to quite a lot of places and I have never seen this kind of operation.  It’s actually not a bad idea!

Sarajevo is a city where East meets West.  It is a medley of Austro-Hungarian buildings and Ottoman ones.  You can go from a Catholic church to a mosque to an Orthodox church to a synagogue.  Sarajevo had a turbulent past and was the location of the assassination that sparked WWI which ended both the Austro-Hungarian and the Ottoman Empires.  In 1914, Bosnian-Serb Gavrilo Princip assassinated Archduke Franz Ferdinand of Austria, the heir to the Hapsburg throne, here in Sarajevo at the Latin Bridge.  The Museum of Sarajevo at the northern end of Latin Bridge tells this story as well as others during the 40-year Austro-Hungarian rule.  Sarajevo is also the location of the Four-Year-Siege, the longest siege in modern European History in the 1990s, where remnants of the war can still be seen across the city. 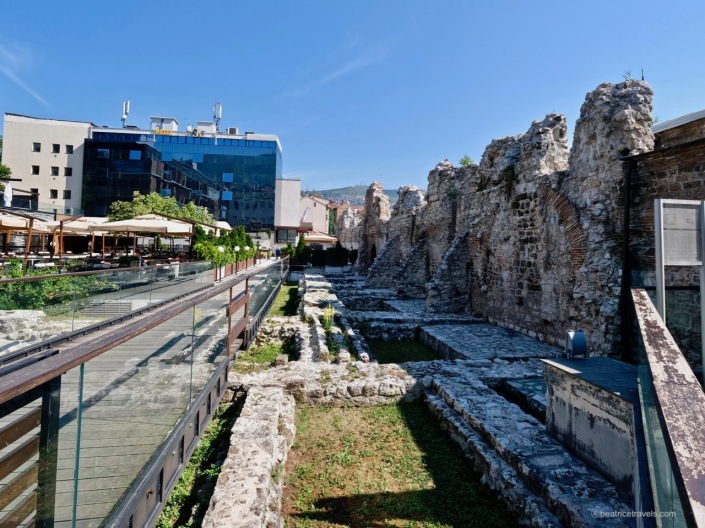 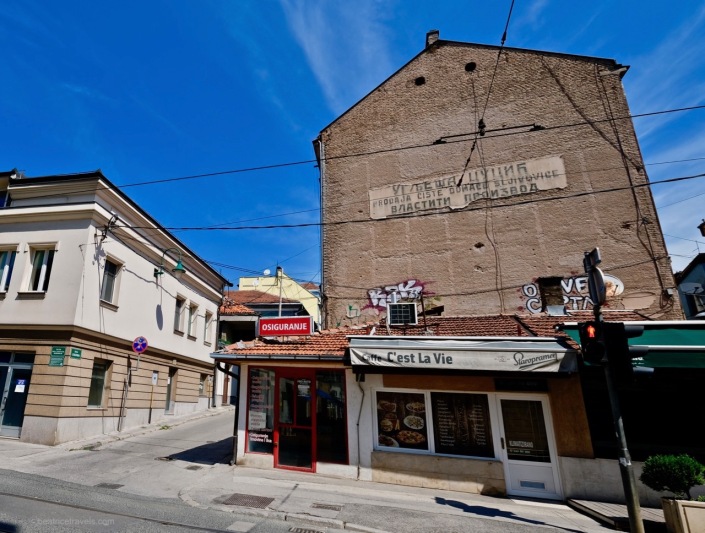 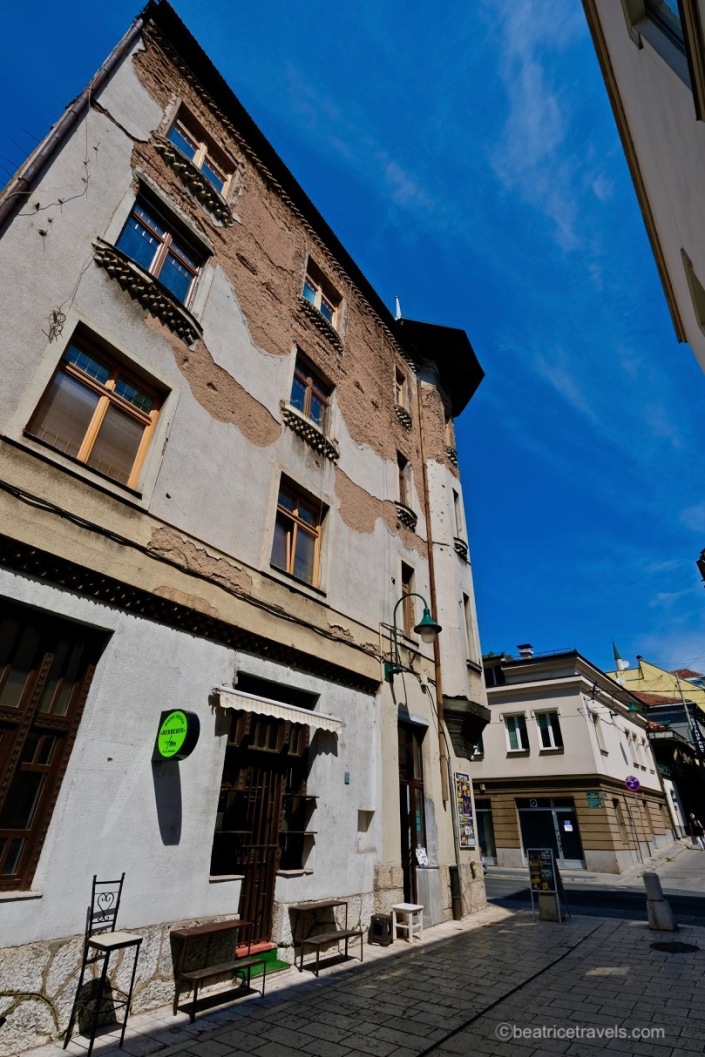 Bascarsija, which means “main market” in Turkish, is the heart of Sarajevo founded by the Ottomans in the 15th century.  Most of the area of the old bazaar is now occupied by kitschy souvenir shops and restaurants and cafes where you can people watch with a cup of traditional Bosnian coffee.  There are still traditional spices stalls, food stalls and some small workshops here and there with coppersmiths claning on copper household items.  Bascarsija is a maze of narrow cobblestone streets where in the past each street was dedicated to a different kind of craft which became the name of the respective street.  The main square in the area Bascarsija Square is nicknamed Pigeon Square because of the large numbers of pigeons here.  In the middle is the Ottoman-style wooden Sebilj public fountain that looks more like a kiosk or enclosed gazebo.  The Sebilj Fountain was the last one left standing in Sarajevo and serves as a symbol of the city.  Legend has it that whoever drinks from Sarajevo’s fountains will return one day. 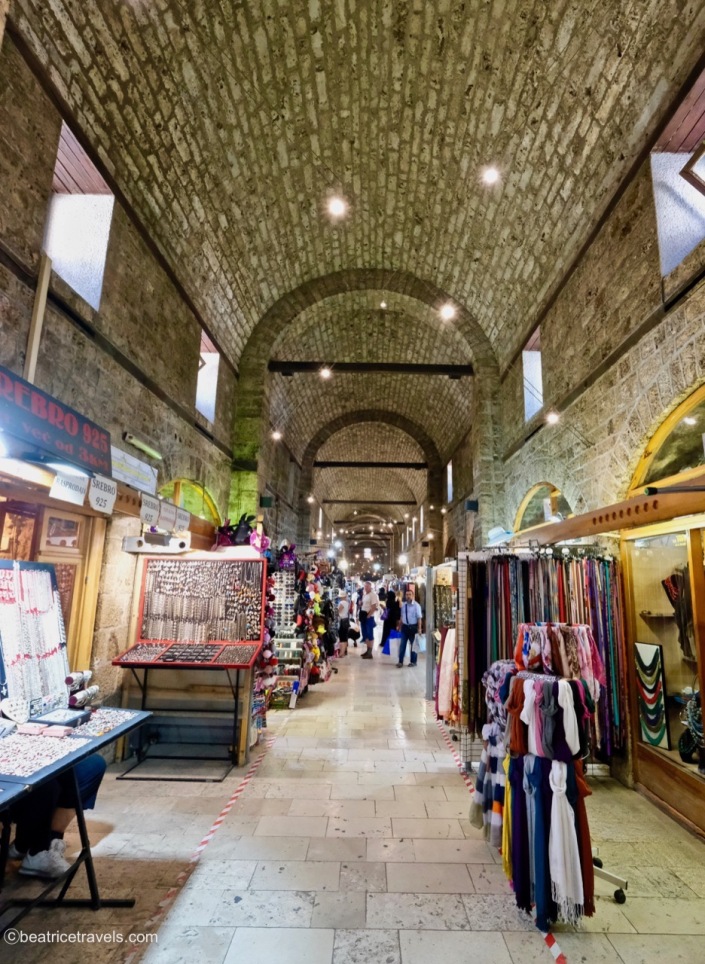 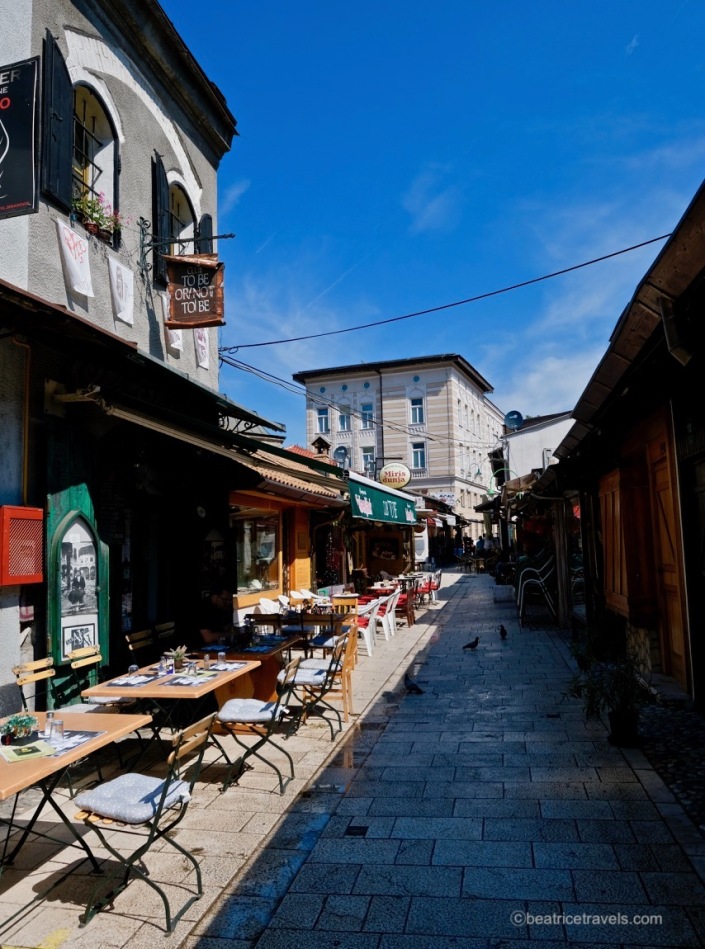 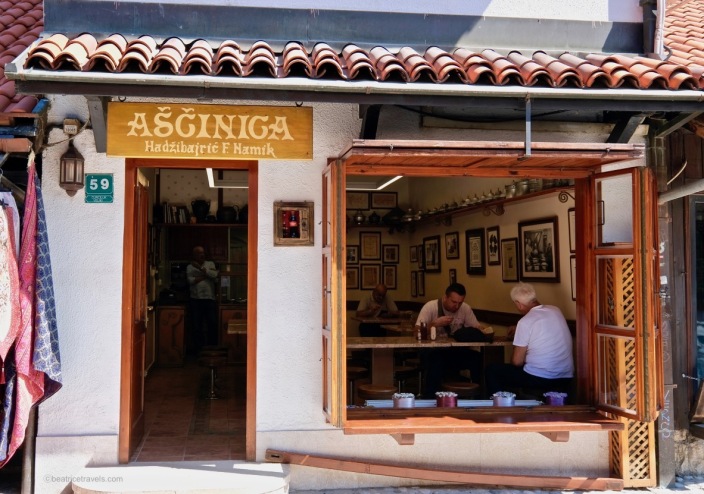 One of the most important historical monuments in Barscarsija is Gazi Husrev-Beg Mosque.  It is the largest mosque in Bosnia erected in 1530 in honor of then governor Gazi Husrev Beg.  Gazi means hero and is an honorific title he received for his role in the successful conquest of Belgrade.  It has a distinct classical Ottoman style with multiple domes but unfortunately most of its original masonry was damaged during the Siege of Sarajevo as it became an obvious target for air raids.  Next to Gazi Husrev-Beg Mosque is the Old Sarajevo Clock Tower which is one strange clock that follows lunar time and is probably the only clock in the world to do so.  When the clock strikes midnight, it is actually sunset time.  Turns out this tallest clock in Bosnia was built in the 17-century to announce to the local Muslims the time for prayer at sunset time.  A timekeeper is required to calibrate the clock every several days to make sure it keeps to the changes of the sunset hour.  Tourists aside, even many locals just assume the clock is broken and keeping the wrong time. 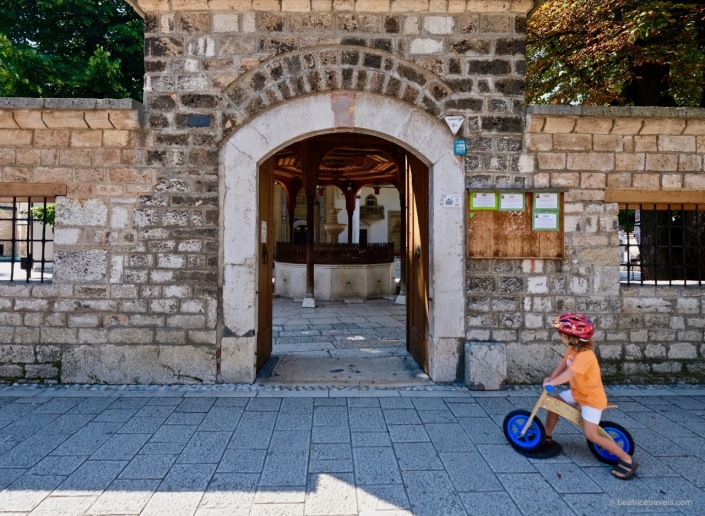 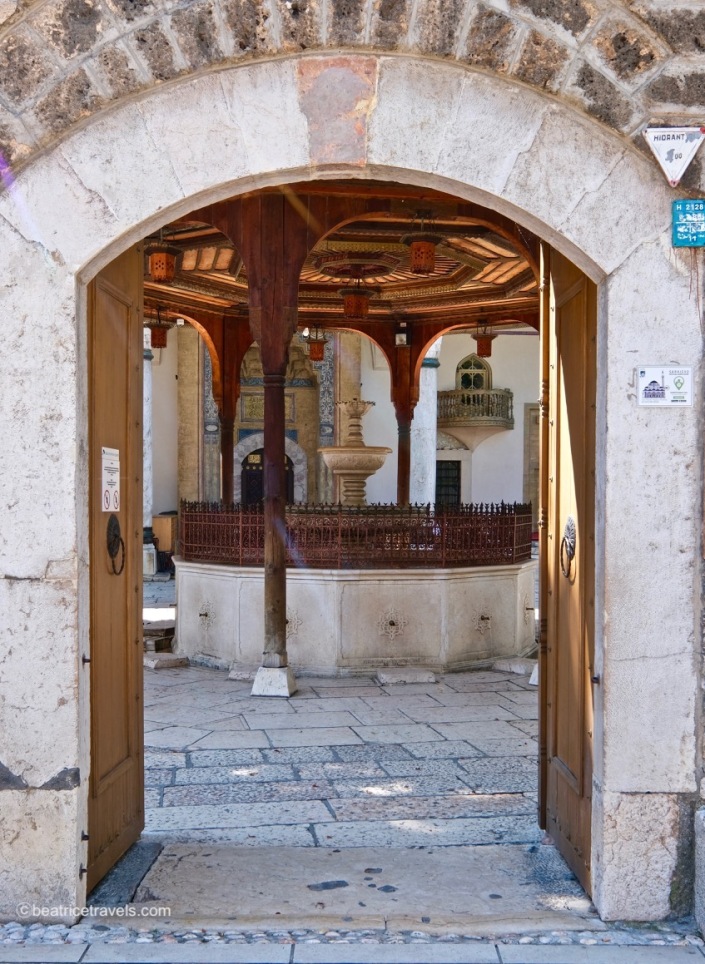 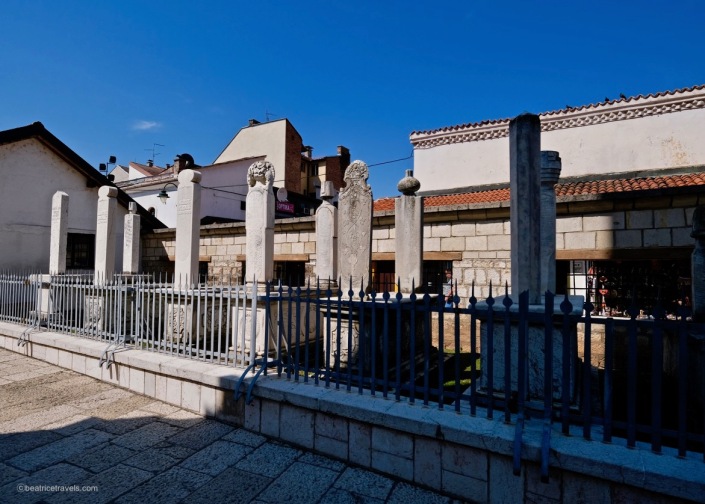 One thing you will notice around the city are the Sarajevo Roses.  During the Siege of Sarajevo (1992-1995), an average of over 300 shells hit the city every day leaving behind many craters that were filled with red resin to remember those casualties during the siege.  They are called Sarajevo Roses because some of these red resin patterns resemble flowers.

Reminders of the Siege of Sarajevo are everywhere and there are two special museums dedicated to this memory.  One is the War Childhood Museum which opened in 2017 and presents the experiences of children who lived through the Bosnian War.  The project was started by Jasminko Halilovic who appealed to young adults who were former “war children” like himself to submit objects that connected to their memories of the war.  Over 3,000 objects were collected together with the stories of these “war children”.  I got teary eyed seeing the displays, watching some video testimonies, and learning about their stories.  Below are some of the displays. 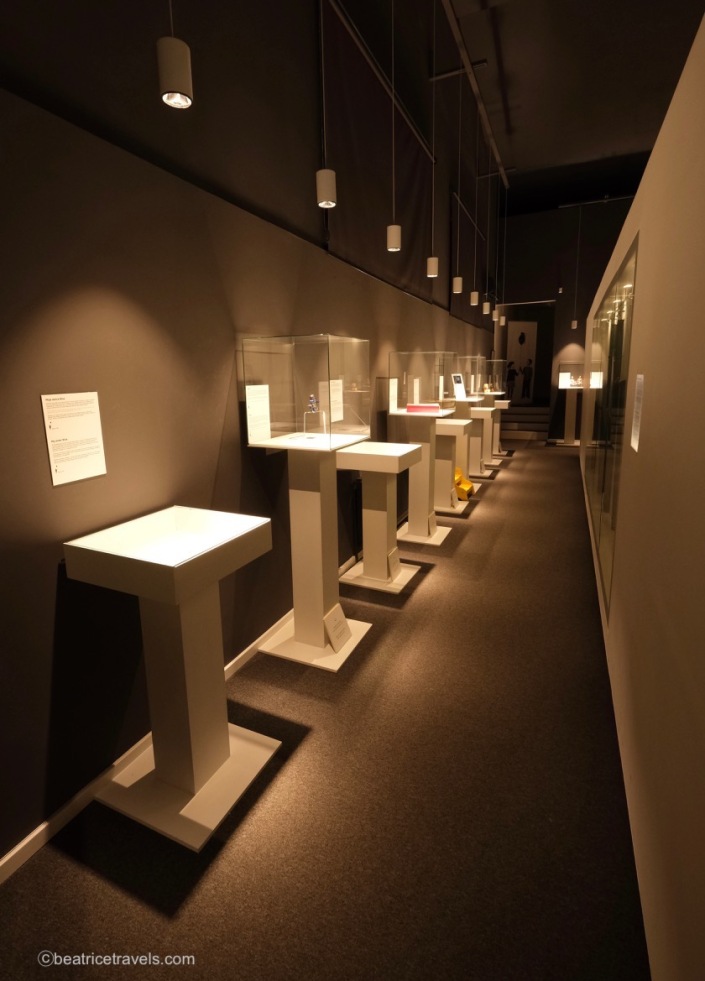 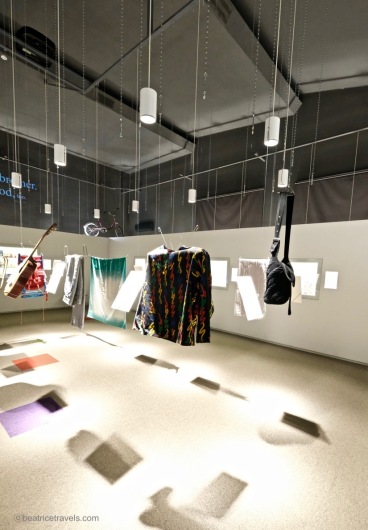 Another museum worth visiting is the Tunnel Museum or Tunnel of Hope just outside the city center.  During the Siege of Sarajevo (1992-1995), Sarajevo was surrounded by Bosnian Serb forces and was cut off from the outside world with rooftop snipers shooting at anyone who walked the streets.  A 800-meter underground tunnel was built that crossed underneath the airport runway which was UN territory in order to smuggle supplies from the Bosnian-held territory into the city.  The tunnel was completed in mid-1993 and was 1.5 meters high and 1 meter wide.  The entrances to the tunnel were inside the cellars of two civilian houses linking the Sarajevo neighborhoods of Dorinja (Bosnian controlled) and Butmir (Serbian controlled).  This tunnel called Tunnel of Hope was the only life line for the besieged city and it is estimated that 20 million tons of food entered the city and 1 million people passed in and out of it.  A 25-meter section of the tunnel has been preserved and turned into a museum to retell the story of this tragic event. 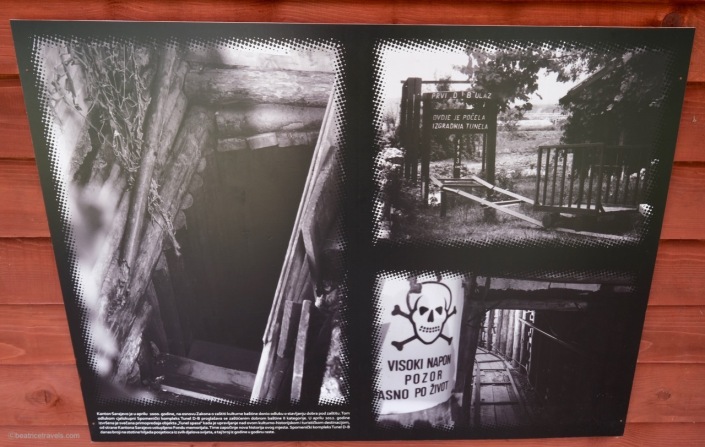 Using Sarajevo as my base, I explored some of the other cities in Bosnia and Herzegovina.  Next post will be on my day trip to Jajce and Travnik.  Stay tuned!