From Almaty, I flew to Shymkent in the southern part of Kazakhstan close to the border with Uzbekistan.  It is the third largest city after the former capital Almaty and the new capital Nur-Sultan and considered one of the most Kazakh city in the country.  People here predominantly speak Kazakh while in other cities, most people still speak Russian.  Shymkent was an important stop along the Silk Road and was founded in the 12th century as a caravanserai.  It became synonymous with kumis which is a local fermented mare’s milk drink that is one thing irreplaceable for the nomads and considered a health tonic and medicine.  Like almost all other central asian cities, it was destroyed by Genghis Khan and rebuilt by the Soviets.  In the early 19th century, Shymkent became part of the Kokand Khanate before being taken by the Soviets in 1864.  Back in the Silk Road days, there were many bustling bazaars here in Shymkent where traders from the east and the west met.  Nowadays, the bazaars are still vibrant, though selling mostly Chinese made goods.  There is not a lot of historical things to see in Shymkent itself and most tourists, like myself, use Shymkent as a base to visit the mosques, mausoleums, and ruins of nearby Turkestan and Sauran etc.  I stayed at the Rixos Khadisha Shymkent Hotel which is a very central asian/middle eastern themed hotel but decent enough, plus there aren’t many other higher end choices in Shymkent. 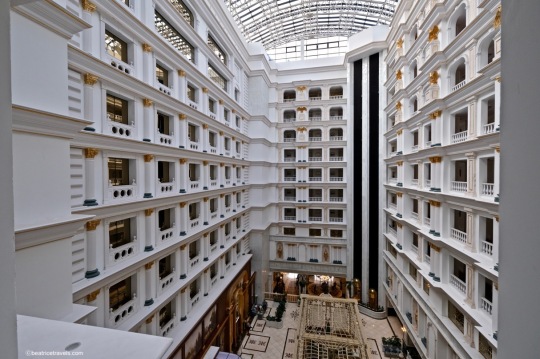 About 2 hours drive southeast of Shymkent is the small 1,600 year old city of Turkestan and my main reason for coming to this area.  Unlike in Uzbekistan, Kazakhstan does not have many well preserved ancient historical towns other than Turkestan which was one of the most important trading centers along the Silk Road and the capital of the Kazakh Khanate.  In the 11th century, Turkestan became an important center of spirituality and lslamic learning led by the great Turkic poet and Sufi mystic Khoja Ahmed Yasawi.  Amir Timur, the great Turko-Mongol conquerer, built a large mausoleum in his honor in the late 14th century, though never finished, it was made a UNESCO World Heritage Site in 2003. 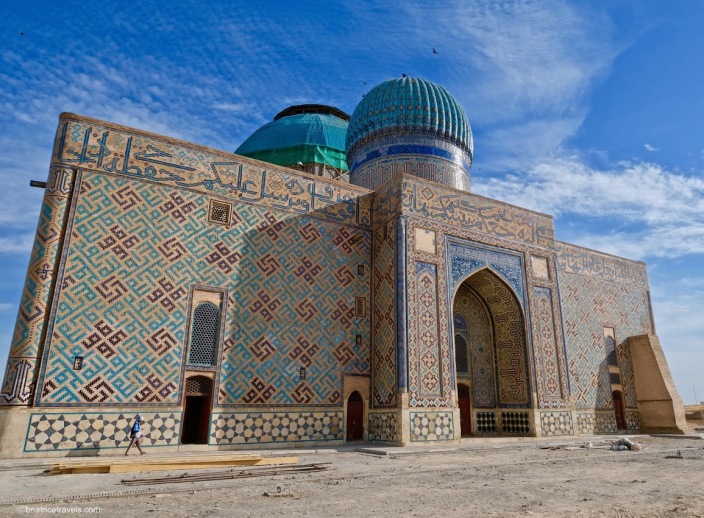 The highlight of Turkestan is no doubt the Mausoleum of Khoja Ahmed Yasawi built by Amir Timur who ruled over Central Asia at the time.  Timur wanted to replace the smaller former mausoleum with a larger and more beautiful one.  Khoja Ahmed Yasawi was born in around 1103 in Sayram and had his Sufi training in Bukhara in Uzbekistan before coming here to Turkestan.  He was considered a saint and was responsible for converting many Turkic people to Islam.  This new mausoleum was built in the Timurid style of architecture and is a taster to what the cities of Khiva, Bukhara, and Samarkand in Uzbekistan look like.  The construction of the mausoleum stopped with the death of Timur in 1405 and was never finished.  Even though unfinished, the beautiful mausoleum entirely covered by blue tiled mosaics is a sight to behold.  There is a main chamber in the mausoleum with a 18 meter wide dome and in the center is a 2,000kg bronze cauldron for holy water said to be donated by Timur himself.  At the end of the main chamber is Yasawi’s tomb which can be viewed through the grilles from the corridors on the sides.  Off the main chamber is also a carpeted mosque with a tiled mihrab.  There are 30+ other chambers inside the mausoleum containing tombs of other important people.  Turkestan has long been considered “the Second Mecca of the East” and locals say that 3 visits to Khoja Ahmed Yasawi Mausoleum equals one Hajj or annual pilgrimage to Mecca. 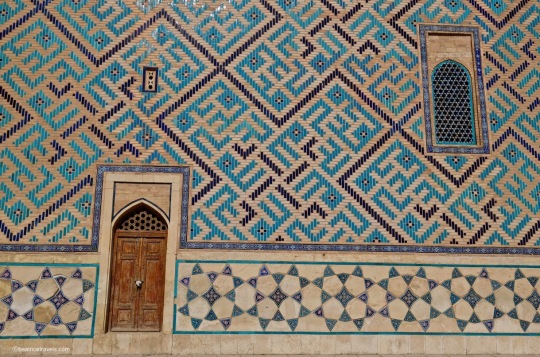 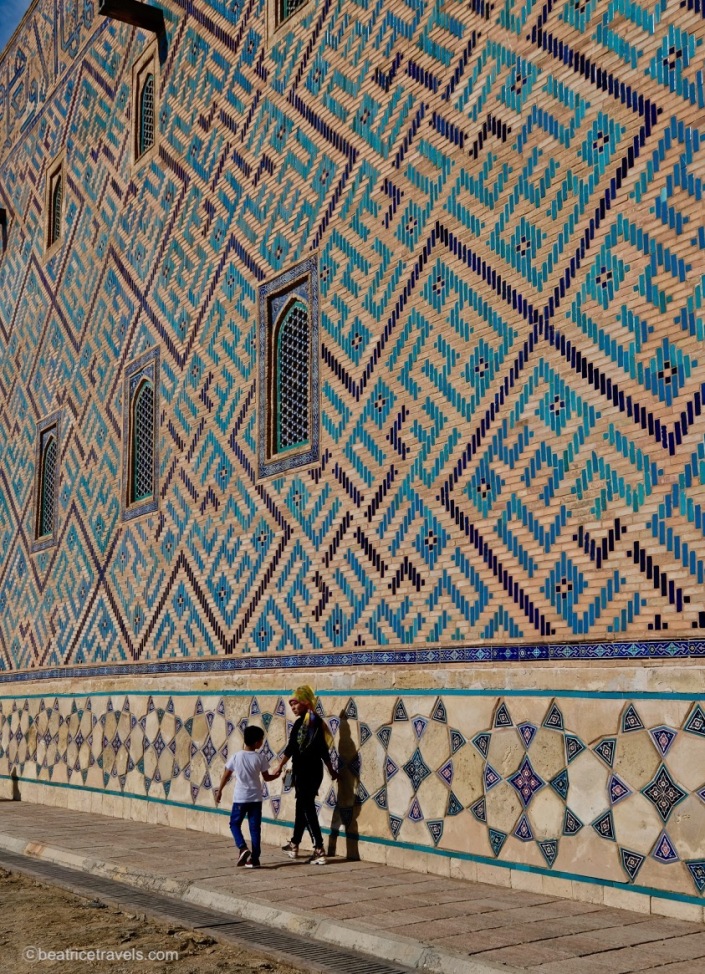 About an hour northwest of Turkestan is Sauran which was once the largest city in Kazakhstan and one of the few cities that survived Genghis Khan’s invasion.  Instead of being razed to the ground, Sauran became the capital of the northwestern sector of the Mongol Empire called the Golden Horde in the 14th century.  Sauran was also a military fortress under Timur later on.  But it was abandoned and the city was left to ruin and is now covered in grass.  Archaeologists speculate that the city was deserted due to drought or the water supply system breaking down.  There has been some excavation work revealing the layout of Sauran as well as a complex system of underwater canals.  The long low baked-earth defensive walls still remain as well as some of the bastions and you can only imagine what this once large bustling city was like. 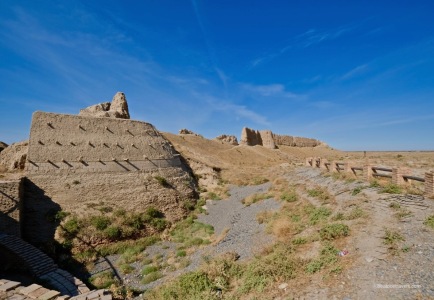 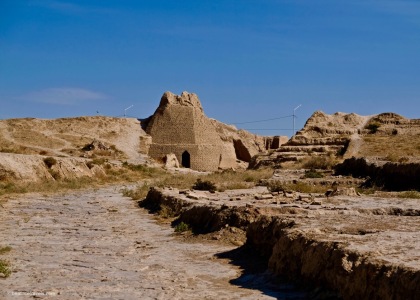 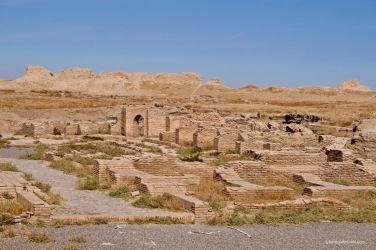 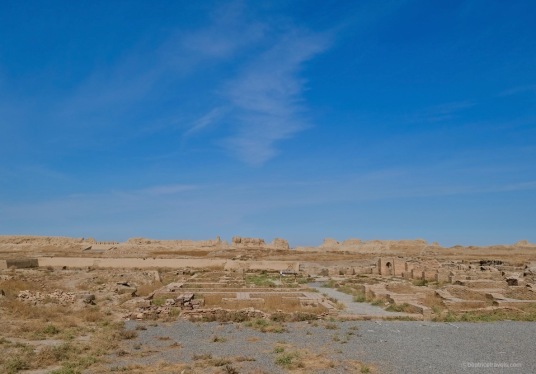 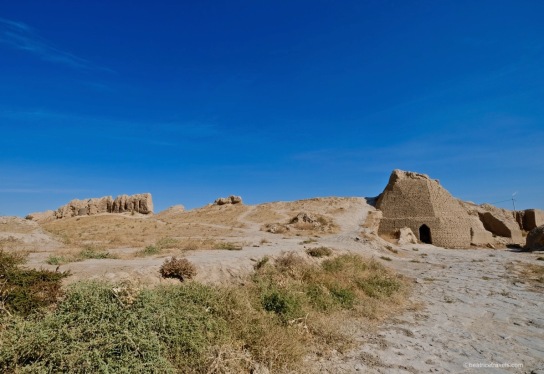 From Kazakhstan, I crossed the land border to Tashkent, the capital of Uzbekistan.  Stay tuned!