About 2 hours drive from Khiva in Uzbekistan is Ayaz-Kala which is an archaeological site with the ruins of a Khorezm fortress built in the 2nd century by the Kushan Empire.  Khorezm is about 3,000 years old and is the oldest civilization in Central Asia and was called the country of “tens of thousands of fortresses” by the Arabs.  Legend has it that the fortress was named after a warrior-slave Ayaz who fell in love with an Amazon princess living in the Kirk-Kiz fortress.  This fortress on the top of a hill was part of a chain of fortresses built to protect the frontier and the oasis at the edge of the Kyzyl Kum desert.   Khorezm is considered the birthplace of one of the oldest religions in the world, Zoroastrianism.   Not much is left here other than some unfortified residential houses with large yards probably planted with flowers and fruit trees.  This shows that instead of living in large residential blocks, the process of separation of individual households had already begun.  Also there are 3 large fortified castles.  Ayaz-1 had about 45 semicircular towers with an arched gallery and a well cut in the center of the rock.  The entrance gateway leads to a small chamber overlooked by high walls where enemies could be shot from above.   Southwest of Ayaz-1 is Ayaz-2 built on a conical hill and was reconstructed by the Afrigids in the 5th to 7th centuries.  The outer walls had a row of arrow slits and the palace within consisted of residential quarters, ceremonial halls, and a fire temple.  It was believed to be the home of a feudal lord.   Ayaz-3 is a large fortress in the shape of a parallelogram with circular water towers.  There is a building with 40 rooms separated by 2 central corridors and a large courtyard with towers and a maze near the gate.  It was believed to be used as a garrison or a ruler’s residence. 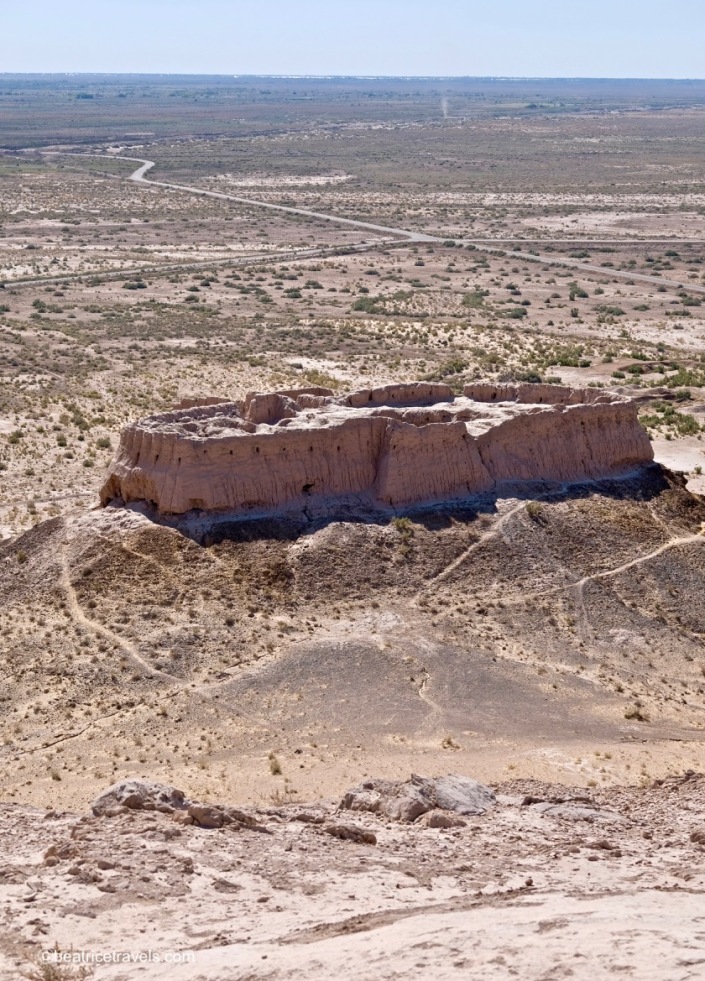 About half an hour away from Ayaz-Kala is Toprak-Kala which is another archaeological site dating back to the 1st to the 6th centuries.  It is one of the few Khorezmian sites in Uzbekistan that had been completely excavated.  Toprak-Kala means “the earthen fortress” and was once the capital of the slave-owning Khorezm in the 3rd century.  The fortress was once surrounded by a mud-brick wall of 10-15 meters high.  It is amazing how these mud bricks have endured the trials of time and some still remain today.  However, the site is deteriorating fast, being eroded by rainwater and being blown away dust particle by dust particle.  This is already the best preserved Kushan fortress in Central Asia.  In the northern part of the fortress was a large King’s Palace with 3 defensive towers, many rooms, and colorful wall paintings.  Inside what was the King’s Hall were 23 clay figures believed to be the tsars of Khorezm.  There was also a hall with wall paintings of dark soldiers and hence named “Hall of Dark-Skinned Warriors”.  It was strange given that the Khorezmians had fair hair and light eyes.  There is speculation that the Khorezmians would all dress in black from head to toe with their faces covered during festivals as well as during wars.  It is a way to protect their king so that the enemies have no idea who and where the king was.  In front of the palace was a fire temple.  In the town area are residential blocks with 150-200 rooms divided by a main street.  There are no separate houses here, only large residential blocks. 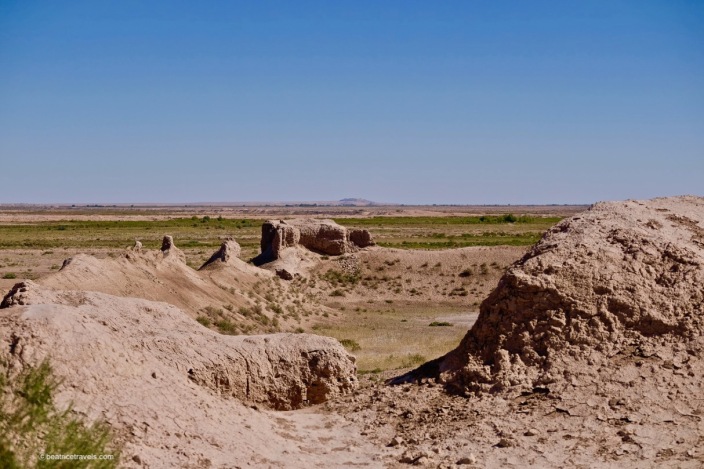 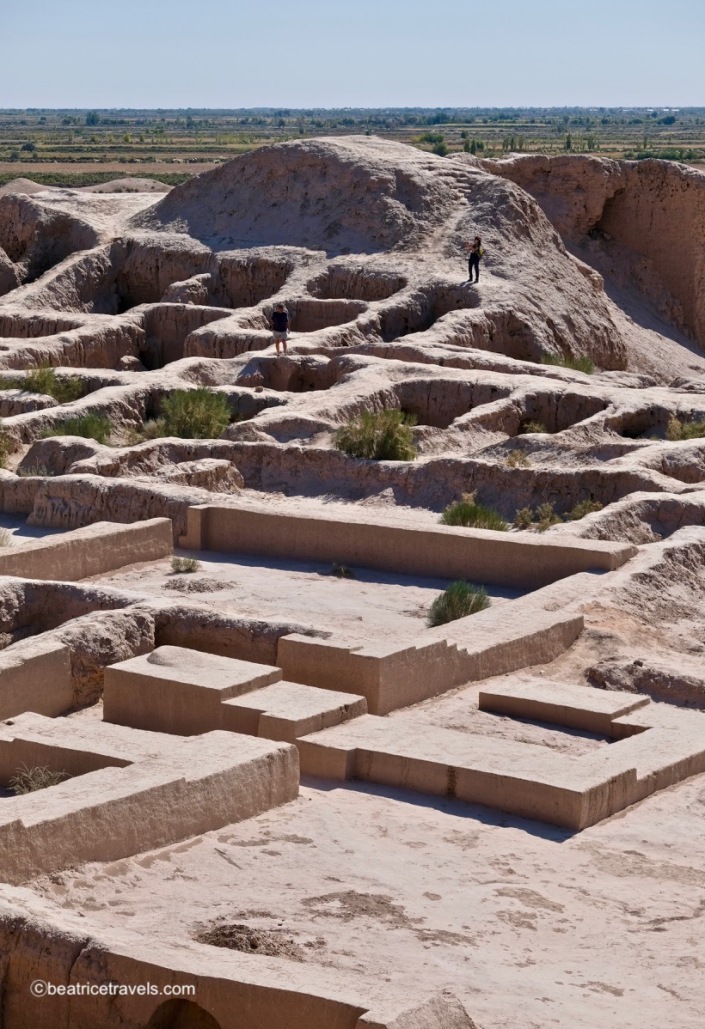 It’s a pity that there is not much remaining of this ancient Khorezm civilization.   Not only was there not much to see, there really isn’t much information either.  Most of the artefacts found here are now in the Hermitage in St Petersburg or one of the other museums.  I would say if you are pressed for time, you might as well skip this.

From Khiva, I continue to another ancient Silk Road city in Uzbekistan – Bukhara.  Khiva and Bukhara are my absolute favorite Silk Road cities on this trip in Central Asia.  Stay tuned!