From Khiva in Uzbekistan, I continued south to its most fierce rival, Bukhara.  I chose to take the one hour flight from nearby Urgench to Bukhara instead of the 7 or so hours drive.  There is talk that there will be a high-speed train connecting these two cities but at the time of writing the only train running is still the slow train taking over 6 hours.  Bukhara is believed to have been founded before the 1st century and even possibly earlier in the 3rd or 4th century BC.  It is considered the holiest city in Central Asia and has long been a major center of trade, culture, and religion along the Silk Road.  Bukhara was captured by the Arabs in 709 and was the capital of the Samanid Empire in the 9th and 10th centuries.  It was conquered by Genghis Khan in 1220 and then Timur in 1379 until it was seized by the Shaybanids in 1506 and became the Khanate of Bukhara.  Bukhara became part of the Uzbek S.S.R. in 1924 and remained the capital of Uzbekistan until it gained independence in 1991.  There are more than 350 mosques and 100 madrasas (Muslim theological schools) in Bukhara as well as a massive royal fortress and the remains of quite a few covered bazaars.  The historic center of Bukhara was made a UNESCO World Heritage Site in 1993 and pretty much remained the same for the past 2,300 years.  I stayed at the 22-room Omar Khayyam Hotel which is a relatively new hotel in the ancient part of town near the Po-i-Kalyan complex.  I would recommend visitors to stay in the old town in order to wander around, do some shopping leisurely, and return to Po-i-Kalyan complex at night when the monuments are all lit up.  Most of the things to see are within walking distance except a few and since I didn’t have all that much time, it was helpful to have a car and guide.  I also lucked out in getting an excellent guide assigned to me especially compared to that horrible one in Khiva.  I forgot to mention in my previous posts on Khiva that even with the most horrible guide, I still loved Khiva, that says a lot for the city no?  Anyways, back to Bukhara. 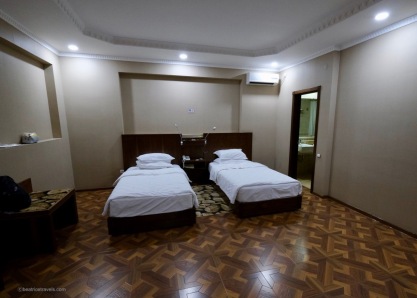 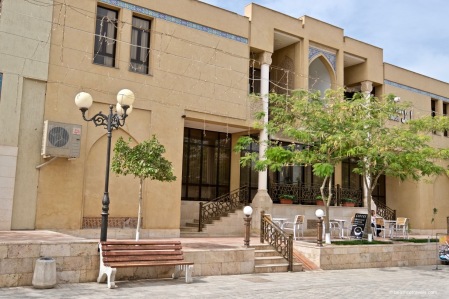 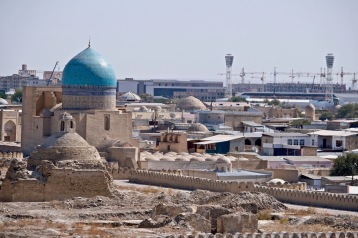 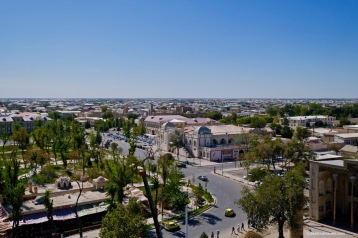 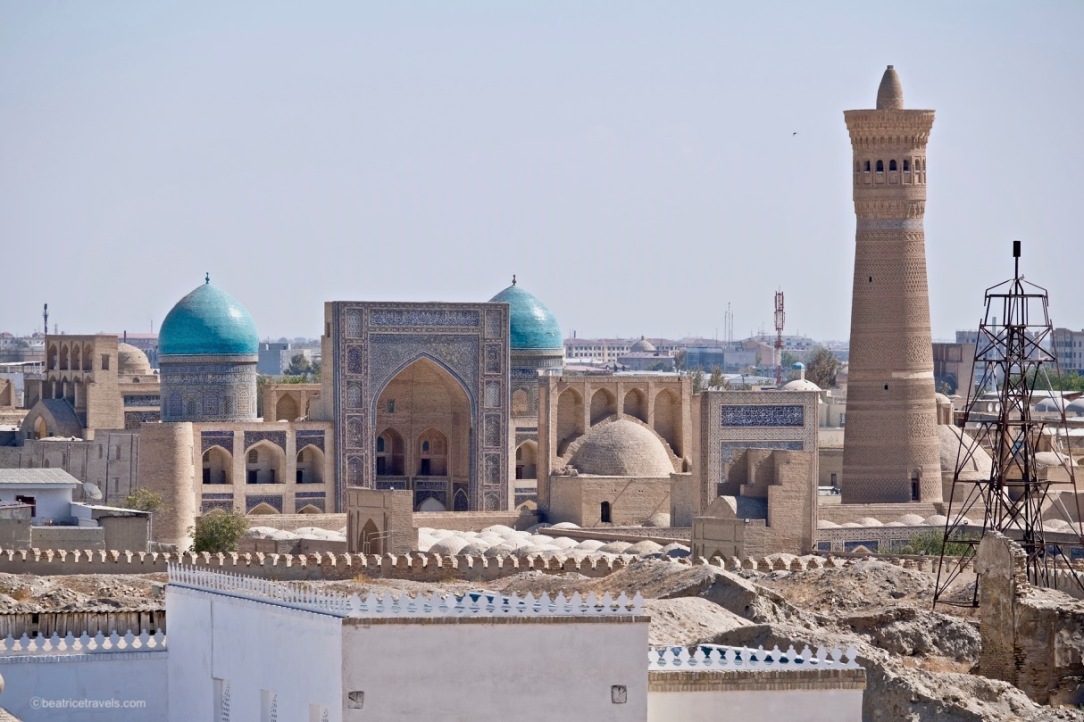 The oldest structure in Bukhara is the Ark which is a massive fortress built in the 5th century.  It is widely believed that Siyavush, the hero of Central Asian folklore, was the founder of the Ark citadel.  Siyavush was said to be hiding from persecution and reached this area and fell in love with the daughter of the local king.  The king tasked Siyavush with a seemingly impossible task of building a palace which could fit on a piece of oxhide.  Siyavush cut the oxhide into thin strips and tied them together making a large circle and building the palace which is the Ark within.  The Ark was the royal residence of the khans for centuries until it was bombed and mostly destroyed in 1920 by the Russians.  The Ark was not just a fortress, it was a city within the city with not only the residence of the khan and his harem, but also government offices, mosques, treasury, mint, and prison.  Two 18th century towers flank the ceremonial entrance into the citadel.  At the top is the 17th century Juma (Friday) Mosque.  Most of the former living quarters of the khan are now archaeological museums.  The oldest surviving part of the Ark is the reception and coronation court where the last coronation was Alim Khan’s in 1910. 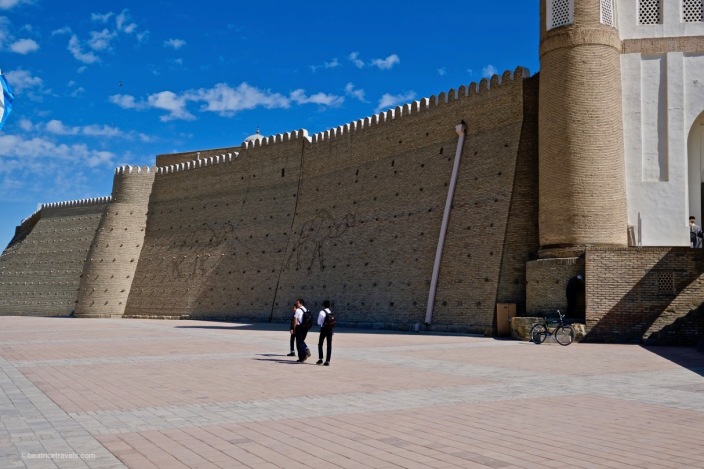 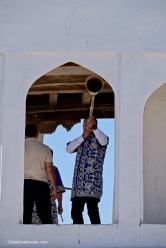 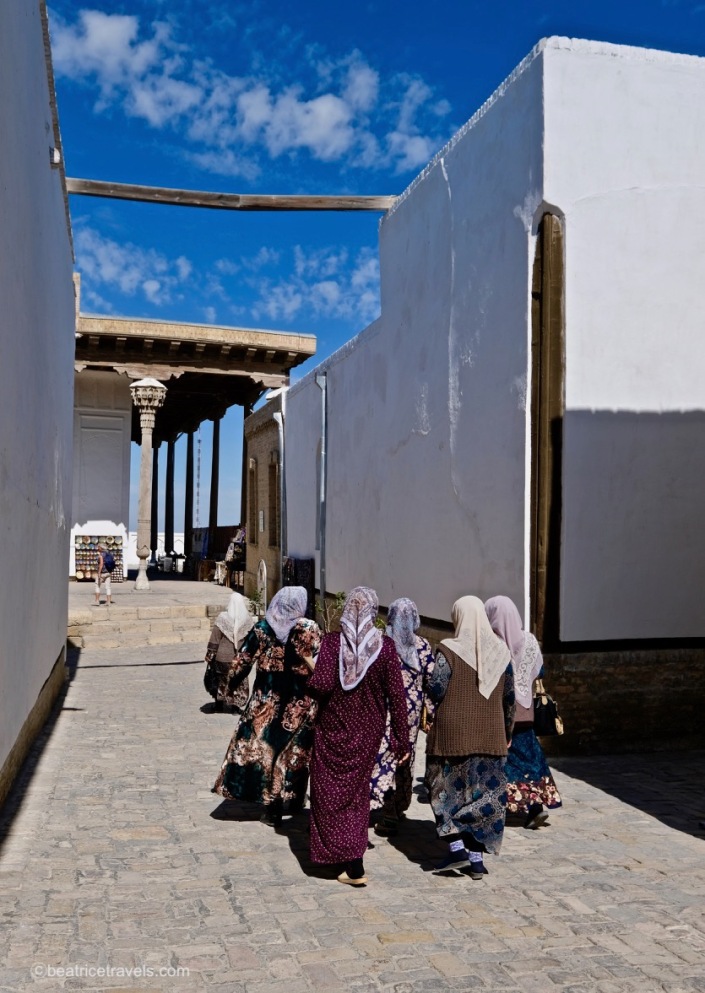 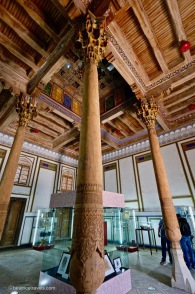 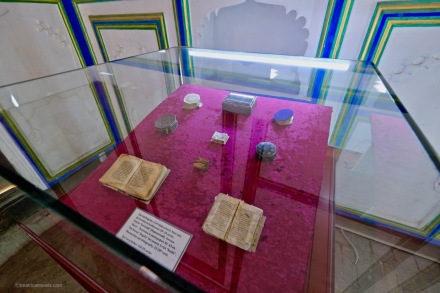 To the west of the Ark lies Registan Square that once served not only as a public square but also as a crowded market place, slave market, as well as a place of flogging and public executions.  Throughout history, Registan Square was where local citizens gathered such as in 1920 the Soviet flag was raised and the fall of the emirate was proclaimed here.  The only monument remaining on Registan Square is the 18th century Bolo-khauz Mosque which was the official place of worship for the emirs.  There are beautiful painted and carved columns supporting the aivan.  The most ancient part of the Bolo-khauz complex is the pool in front called “children’s reservoir”.  Bolo-khauz Mosque served as a Friday mosque when the emir of Bukhara was under Soviet control in the 1920s. 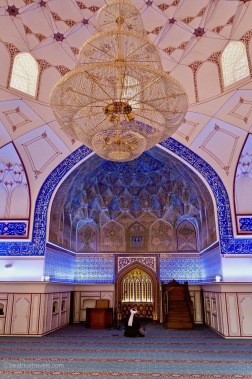 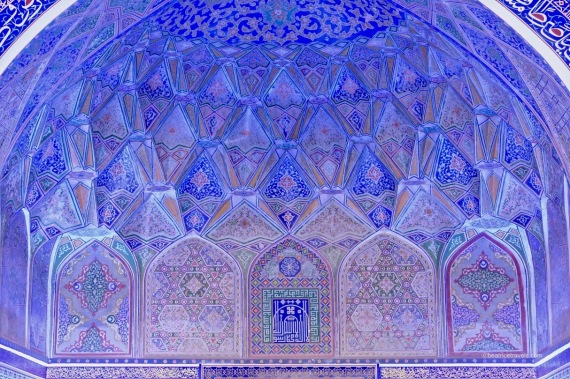 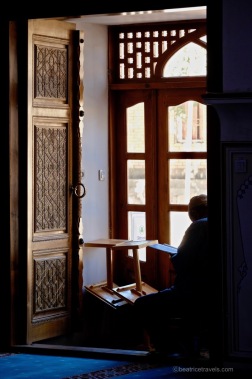 The most visited sight here in Bukhara is no doubt Po-i-Kalyan which is a complex in the center of the old town consisting of the Kalyan Minaret, Kalyan Mosque, and the Mir-i Arab Madrasa.  The name Po-i-Kalyan means “at the foot of the great” and that is because the complex sits at the foot of the 45-meter high Kalyan Minaret or Great Minaret.  It was probably the tallest building in Central Asia when it was built.  This impressive minaret was the only monument spared from destruction when Genghis Khan arrived in Bukhara.  Kalyan Minaret was built in 1127 by Bako on top of 13-meter deep foundations made with a mix of bulls’ blood, camel milk and eggs, and supposedly took 2 years to set.  It is decorated with 14 different ornamental bands and this is where the glazed blue tiles seen all over Central Asia were first used.  It is 104 steps along a spiral staircase up to the top of the minaret where there is a 16-arched rotunda and skylight.  Unfortunately, you are no longer allowed to climb up the minaret.  Kalyan Minaret is also known as the Tower of Death which legend has it that criminals sentenced to death were thrown off the top. 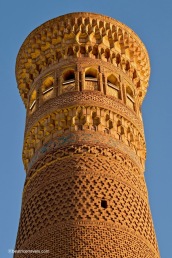 Right next to the minaret is the 16th century Kalyan Mosque or Great Mosque serving as Bukhara’s main mosque able to accommodate 10,000 worshippers.  It replaced the earlier 8th century mosque where Genghis Khan ordered the pages of the Quran to be trampled by his horses.  He also ordered the mosque to be burned down.  The courtyard here is surrounded by 208 columns and 288 domes and is truly a work of art. 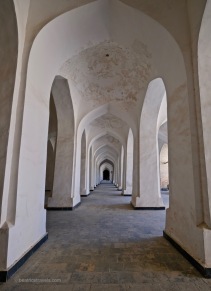 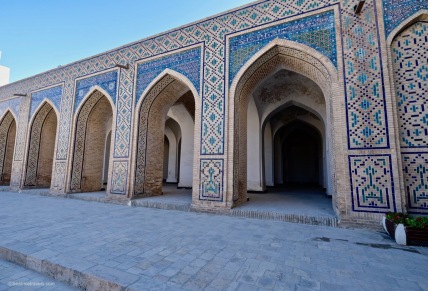 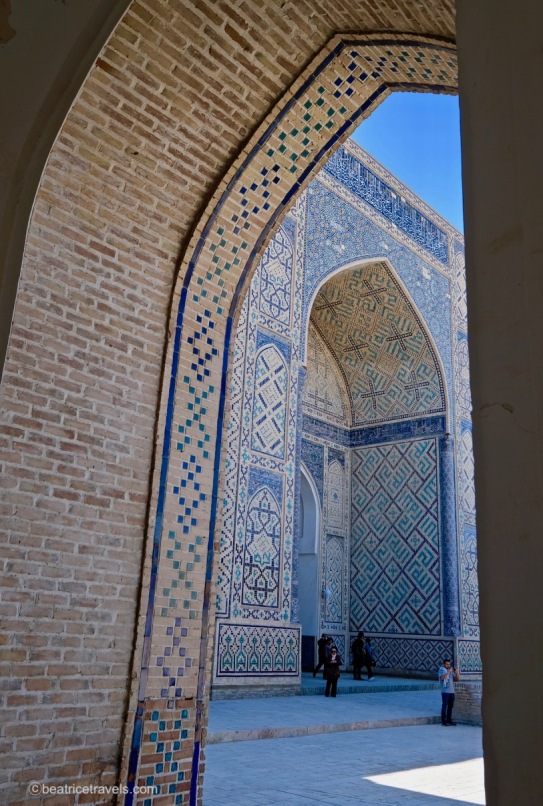 Opposite the Kalyan Mosque is the Mir-i Arab Madrasa built in the mid 16th century and is considered one of the most important theological institutions in the Islamic world.  It remained operational even during Russian occupation and still has about 180 students enrolled today.  The training here focuses on Arabic and Quranic studies preparing the students to someday become Imams (religious community leaders).  It is said that the madrasa was built with the profits from the sale of 3,000 Persian slaves by its benefactor Ubaidullah.

An absolute must is to return to Po-i-Kalyan in the evening when all the monuments are lit up.  Even though the lighting is not done as subtly as in Khiva and reminded me a bit of the Ice Festival in Harbin or some amusement park, it is still a sight to behold. 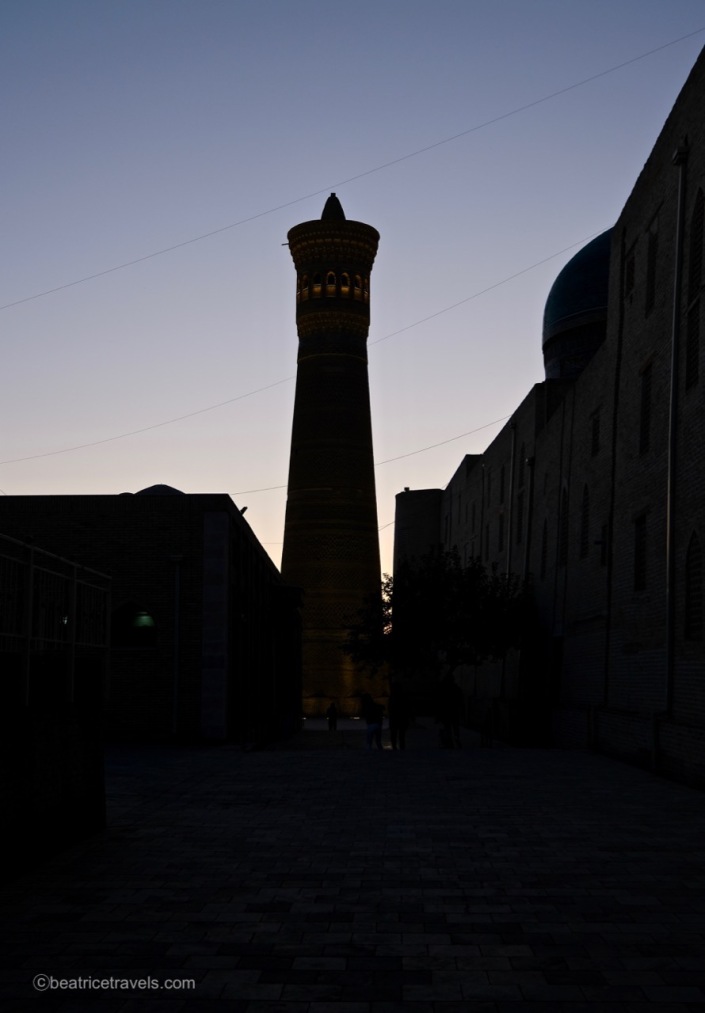 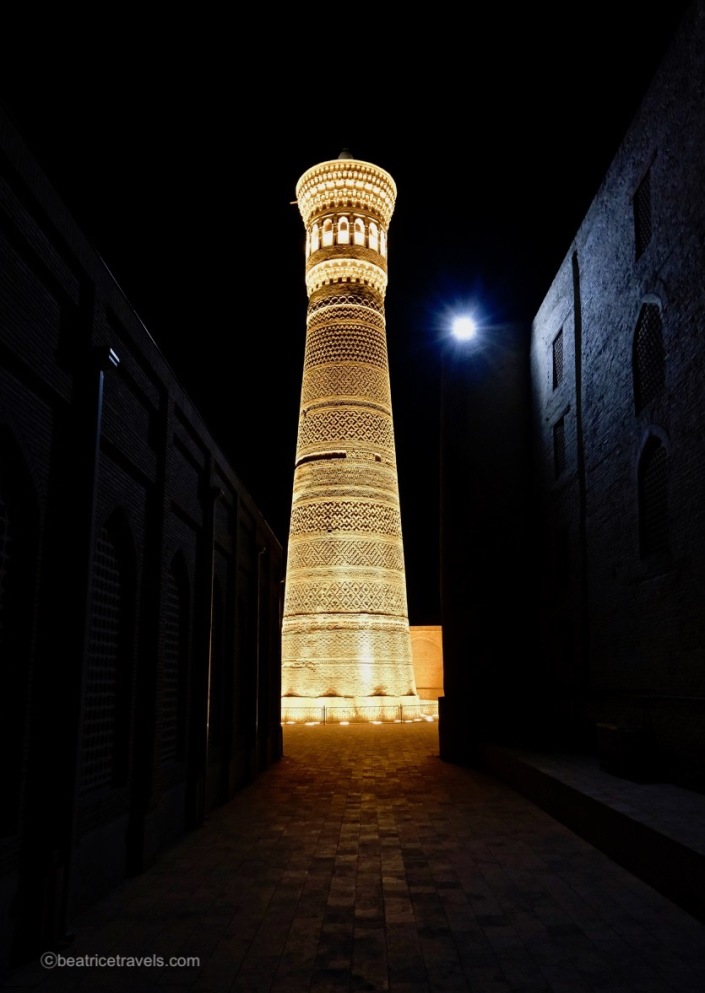 Close to the Po-i-Kalyan complex is the Ulugbek Madrasa founded in 1417.  This is the first madrasa built by the Timurid ruler, Ulugbek, with the other two in Samarkand and Gijduvan.  It is considered one of the oldest madrasas built in Central Asia and became a model for many other madrasas.  Ulugbek was known to be an avid astronomer and this madrasa is decorated with many star motifs.  There is an inscription over the entrance that “It is the sacred duty of every Muslim man and woman to seek after knowledge”.  Once upon a time here on the premises were a lecture hall, a mosque and a hidden library.  Nowadays, the madrasa has been taken over by shops selling handicrafts and souvenirs.

Across from Ulugbek Madrasa is the Abdul Aziz Madrasa built in 1652.  It was dedicated to Abdul Al-Aziz after his defeat of the Mughal army in Balkh and is the last large madrasa built in Bukhara.  It is a very colorful madrasa deviating from the traditional color schemes and designs.  There are coloful ghanch stalactites hang from the ceiling of the prayer room as well as some Chinese style landscape decorations.  Legend has it that Abdul al Aziz had the image of his face secretly inserted in the mihrab since Islam prohibits figurative art.  The madrasa itself is largely left unrestored. 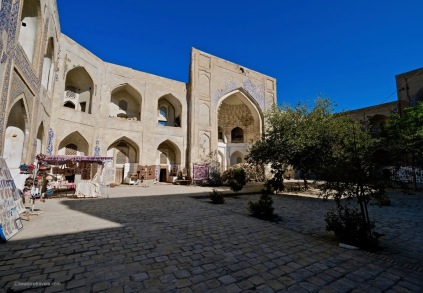 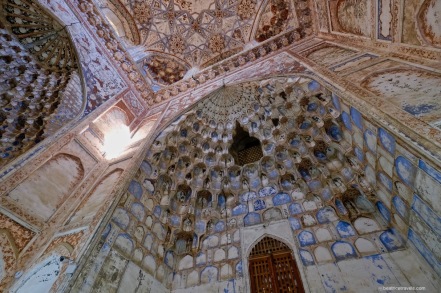 Bukhara so far is my favorite ancient Silk Road city.  The city is truly a treasure trove and I will continue with more Bukhara sights in my next post.  Stay tuned!