After our stay at Semeli Hotel in Mykonos Town, we moved down to the Branco Hotel on Platis Gialos which is the longest beach of the island.  Branco Mykonos is one of the newer kids on the block located right on the beach with their own beach club.  It is a short walk to the … END_OF_DOCUMENT_TOKEN_TO_BE_REPLACED 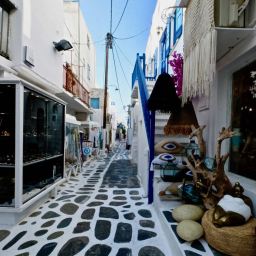 After a week of culture, sightseeing, and lots of driving in Romania, we flew to the Greek island of Mykonos for some R&R and for our proper holiday to begin.  For our week on this sun-soaked island, we decided to stay 3 nights at Semeli in Mykonos Town or Chora and the other 3 down … END_OF_DOCUMENT_TOKEN_TO_BE_REPLACED 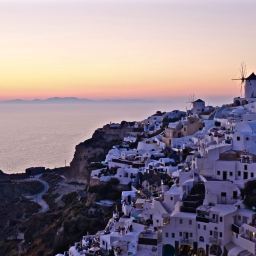 The island of Santorini in Greece is famous for its white stone houses spilling down the cliff, stunning sunsets from Oia town, and dramatic views from the caldera.  We opted to stay in Oia which is more peaceful than Fira but still quite busy during the day until the tourists from the cruise ships leave after sunset.

END_OF_DOCUMENT_TOKEN_TO_BE_REPLACED

Meteora means “suspended in the air” in Greek. Greek Orthodox monks first settled in this area in Central Greece in the 11th century. The first hermits built simple dwellings in hollows and fissures in the rocks and lived in solitude. Then monks started building monasteries on top of these sandstone columns. These monasteries were built under almost impossible conditions with the materials carried up by monks scaling these sandstone columns. There were originally 24 monasteries perched on these sandstone peaks, now only 6 remain, namely The Great Meteoron, Varlaam, Rousanou, St. Nikolaos, St. Stephen, and Holy Trinity.

END_OF_DOCUMENT_TOKEN_TO_BE_REPLACED

Delphi is conveniently on the way from Athens to Meteora and stopping for a visit is a wonderful way to break up the long drive.  The drive from Athens to Delphi was a little over 2 hours. Delphi was considered the center of the world by the Ancient Greeks and is also where the most famous oracle resided.

END_OF_DOCUMENT_TOKEN_TO_BE_REPLACED

We began our Greek adventures in the capital city of Athens.  The city is dotted with ancient ruins and I loved the mix of the old and the new next to each other.  Of course, a visit to the famous Acropolis and The New Acropolis Museum are musts.