It must have been a good 20 years since I was last in Lisbon.  To be honest, I didn’t think much of it back then and vaguely remembered the main sightseeing spots.  Apparently after years of being overlooked, it has, in recent years, become a very popular destination in Europe.  It seems that everyone I speak to about Portugal are singing its praises.  So preconceptions out of the window, I set out to re-explore this beguiling capital.  Lisbon, the capital of Portugal, is one of the oldest cities in the world and the second oldest capital city in Europe, the oldest being Athens.  It is set in a hilly area near the mouth of the River Tagus with the Praça do Comércio on the bank of the river and in the center of the lower town called Baixa.  To the east are the multicultural Mouraria and historic Alfama districts, both of which survived the Great Earthquake of 1755.  To the northwest up the hill is the upper town called Bairro Alto which is the bohemian area where many of the cool shops, restaurants, and bars are located.  The city is blessed with many historic monuments, green parks, and a charming old quarter filled with a maze of narrow cobblestone streets.  It is the perfect mix of hip, history, and laidback charm.  I stayed at the centrally located 5-star boutique hotel Bairro Alto Hotel overlooking Luis de Camões Square where the Carnation Revolution took place and which marks the border between Chiado and Bairro Alto districts.  Praça Luis de Camões is a favorite meeting place for locals and is named after the famous Portuguese poet from the 16th century lauded as the Shakespeare of Portugal.  Bairro Alto hotel has just undergone a 2-year extensive renovation and its rooftop bar offers some of the best views of the city.  The rooms are on the small side but the location and amenities are unbeatable.  And being on the same square as the famous Manteigaria pastel de nata (Portuguese custard tarts) bakery and O Trevor which serves the best bifana (traditional Portuguese sandwich packed with thin slices of marinated pork) is definitely a plus!  But beware of pickpockets in this area and other touristy areas.  They are usually youngish gypsy girls dressed up like tourists.  They tried to pickpocket me 3 times during my stay!  Fortunately, they were not successful.  These girls are not as skillful as those in Paris or Rome, and I have a sneaky suspicion Lisbon is the training ground for them.  One of them stuck her hand inside my bag so I held my bag tight, with her hand inside, and started crossing the road really fast and turning around abruptly and pretending to be surprised to see her “attached” to my bag.  Another time, a girl managed to open the zipper of my bag but it was one of those metal zippers and made a loud noise.  She pretended to say that she was trying to close the bag for me, I just told her to scram.  You get used to their presence, but you have to always be vigilant which is my main complaint of Lisbon. 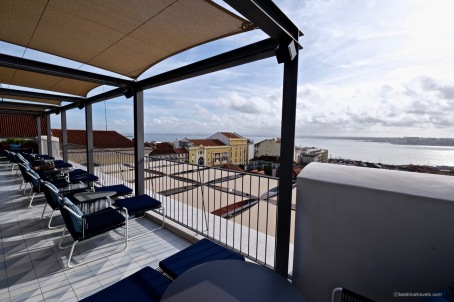 Baixa or lower town was completely rebuilt after the Great Earthquake of 1755 by the Marquis of Pombal in a grid pattern instead of restoring the original layout of narrow meandering streets.  It is the heart of Lisbon with neoclassical buildings, wide avenues, and beautiful squares.  The most impressive of such squares is the Praça do Comércio located on the banks of the River Tagus.  The square is also referred to as Terreiro do Paço which means Palace Yard because of the Royal Ribeira Palace that used to be there before the earthquake.  In the center of the square is the statue of the late King José I on horseback.  The square is a rectangular U-shape with symmetrical buildings that have arcades on both sides used as government offices and now shops.  It used to be the center of Lisbon’s commercial and trading center.  Facing the water is the 19th century triumphal arch Arco da Rua Augusta built to commemorate Lisbon’s reconstruction after the Great Earthquake of 1755.  The top section of the arch features statues of 15th century explorer Vasco da Gama and the Marquis of Pombal. 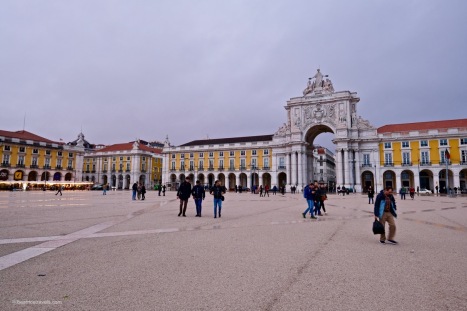 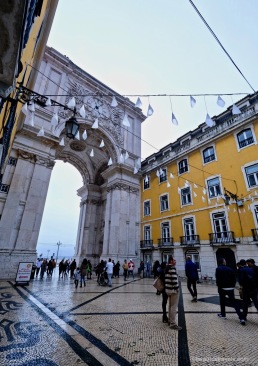 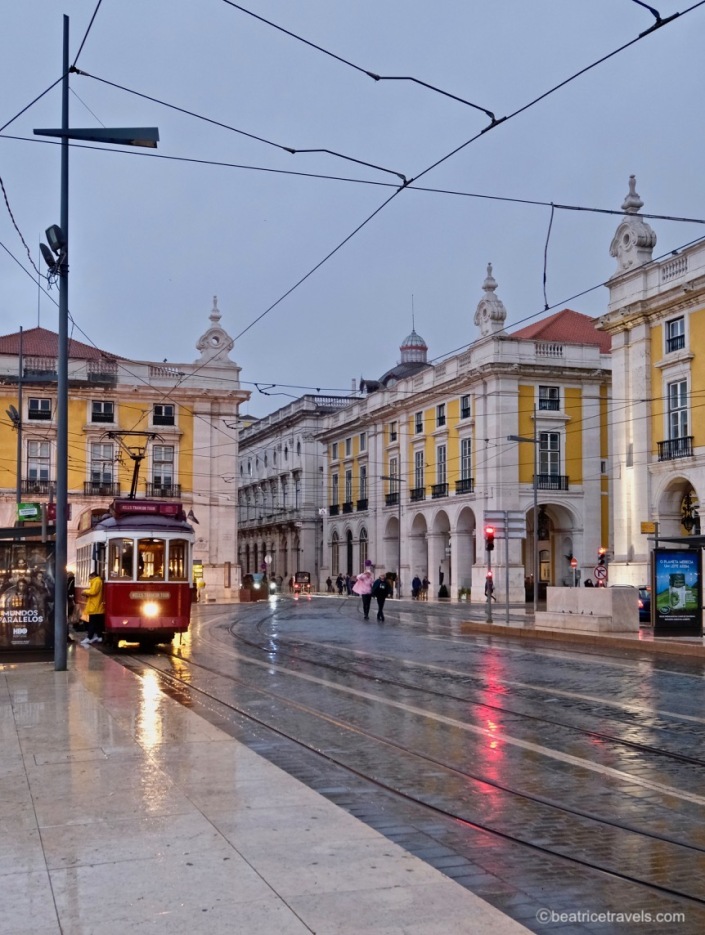 Heading up from Parça do Comércio, you will pass the 16th century Igreja de São Roque which you can easily walk pass and not think much of it due to its plain exterior.  However, don’t be fooled by the plain facade, the interior of this earliest Jesuit church in the Portuguese world is lavishly decorated in gold, marble, azulejos tiles, gilded woodwork, and semi-precious stones.  It was built holding a number of Baroque side chapels with the most notable one being the Chapel of St. John the Baptist where it was originally constructed in Rome in 1742 and then disassembled and moved to São Roque.  The chapel is adorned with amethyst, lapis lazuli, carrara marble, inlaid with gold and silver, and other ornate materials making it one of the most expensive chapels ever built. 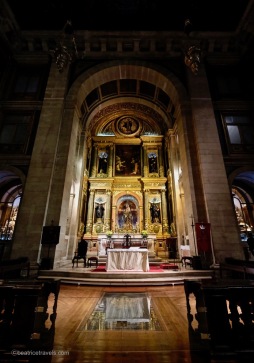 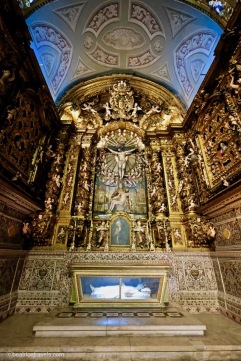 A cool thing to check out not far from Igreja de São Roque is an industrial age elevator called Elevador de Santa Justa.  This lift was designed by Raul Mesnier de Ponsard who was a student of the iron craftsman Gustave Eiffel who built the Eiffel Tower in Paris.  No wonder the beautiful wrough-iron neo-gothic structure seemed very familiar.  Elevador de Santa Justa was built in 1902 and could transport 29 passengers vertically up 7-storeys or 45 meters which was a welcome relief when climbing the steep hill during the summer heat.  It was part of the city’s public transport system connecting Baixa with Lago do Carmo in the Bairro Alto neighborhood.  The elevator was steam-powered until 1907 when it was replaced by an electric engine and there is now a viewing platform where the steam engine used to be.  Locals don’t really use the elevator now and it is mainly for the tourists. 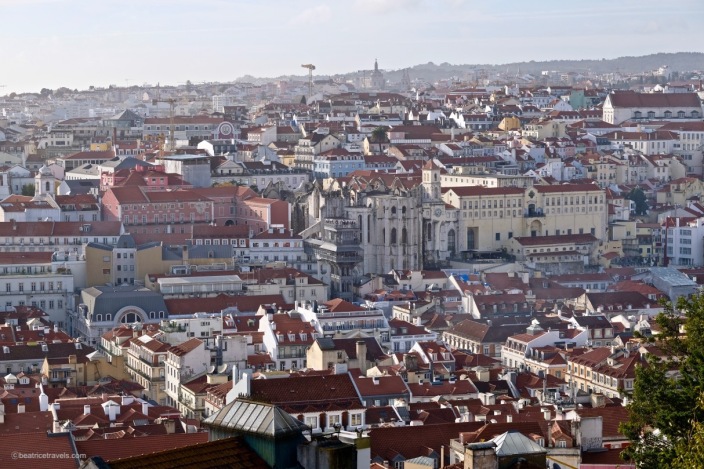 There is a 25-meter walkway at the top of Elevador de Santa Justa that connects to Largo do Carmo dominated by the ruins of the Igreja do Carmo destroyed by the earthquake of 1755.  The skeletal remains of the church exposed to the elements is definitely one of my favorite touristy spots in Lisbon.  This gothic church was built between 1389 and 1423 and together with its adjacent convent was once Lisbon’s most distinguished church.  The church collapsed during the devastating earthquake toppling candles and killing hundreds who were there for the All Saints Day congregation.  The chancel survived the destruction and is now an archaeology museum with a hodge podge of archaeological finds such as column fragments, azulejo panels, and even Peruvian mummies. 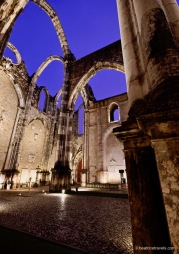 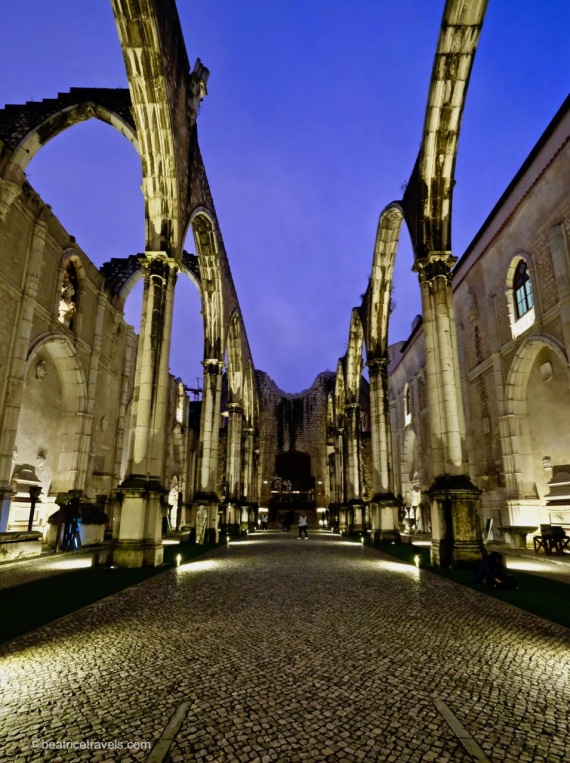 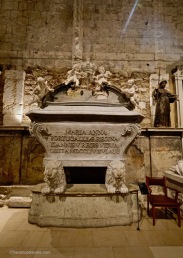 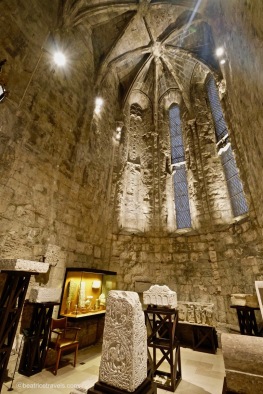 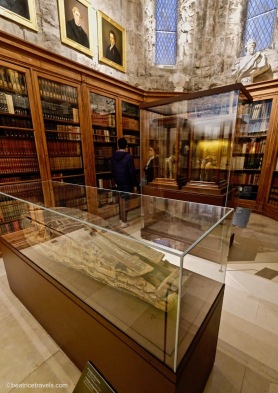 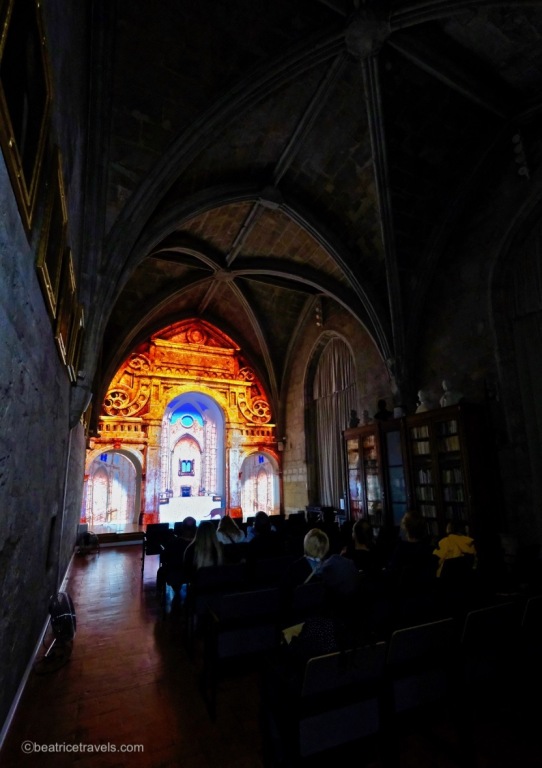 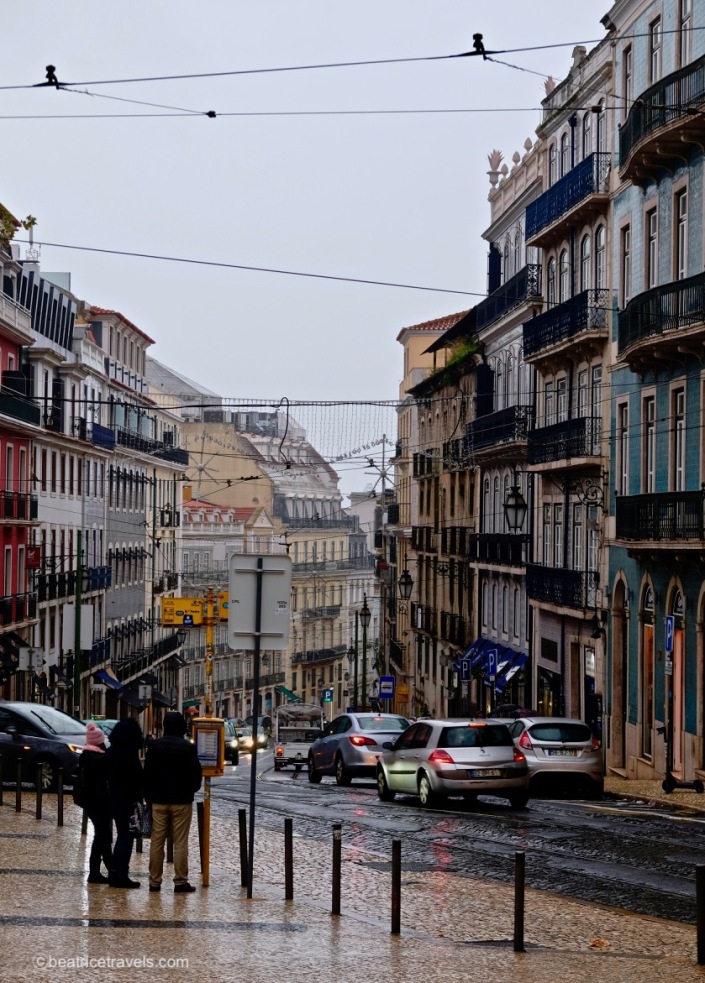 In between Baixa and Alfama is 12th century Lisbon Cathedral or Se Cathedral which is the oldest cathedral in Lisbon.  The architecture of the cathedral is a mix of Romanesque, Gothic, and Baroque styles.  This fortified church has undergone several reconstructions since it was consecrated in 1150 especially after the earthquake of 1755.  The Se Cathedral was built on top of a ruined mosque by Christian Crusaders which you can still see in the partially excavated cloisters in the back of the church.  The cathedral was built here to symbolize the Catholic conquest of Portugal from the Moors.  In the center of all the Gothic pillars and arches is a splendid rose window that has been reconstructed from the fragments of the original window that was shattered during the earthquake of 1755.  Also inside the church is a small treasury with many valuable religious artifacts such as rare manuscripts, embroidered vestments, and chalices etc. 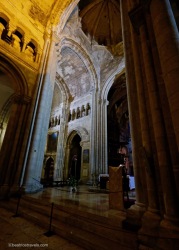 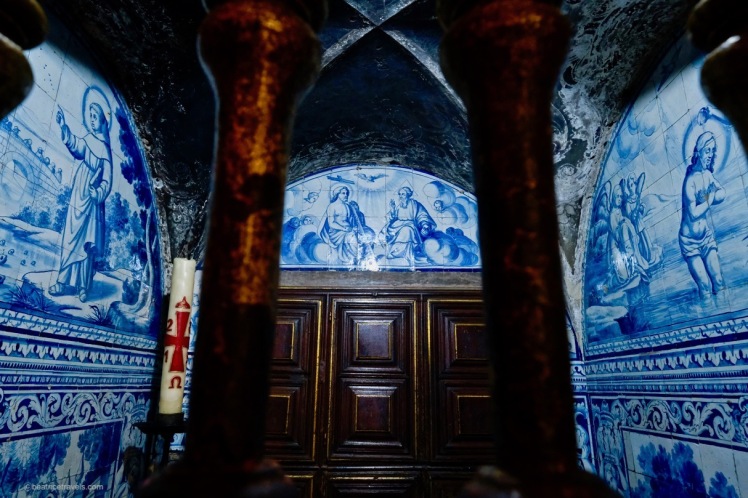 Alfama is one of the oldest neighborhoods in Lisbon filled with a labyrinth of cobbled alleys, old houses, and quaint plazas.  It was first founded by the Arabs who called it Al-hama which means “source of good water” and was one of the few areas that survived the Great Earthquake of 1755.  During the Moorish times, Alfama was reserved for the upper class until after several earthquakes before the great one in 1755 destroyed many of the beautiful mansions and led to the rich moving out.  After that Alfama was reverted back into a working class neighborhood but the area is now being gentrified into a trendy and fashionable neighborhood.  Gone are the days where the grim neighborhood was associated with squalor, poverty, and roughness.  The streets of Alfama are quite steep and too narrow for cars to pass, so the best way to visit this area is to take the number 28 tram all the way to the top (Largo da Graça) and then from there wander down the hill.  Beware of pickpockets on the trams, especially the No 28 Tram.  The neighborhood still retains its Moorish flavor and feels like a small village with neighbors talking to each other and clothes drying on clotheslines.  I thoroughly enjoyed getting lost in this neighborhood and seeing people going about their lives. 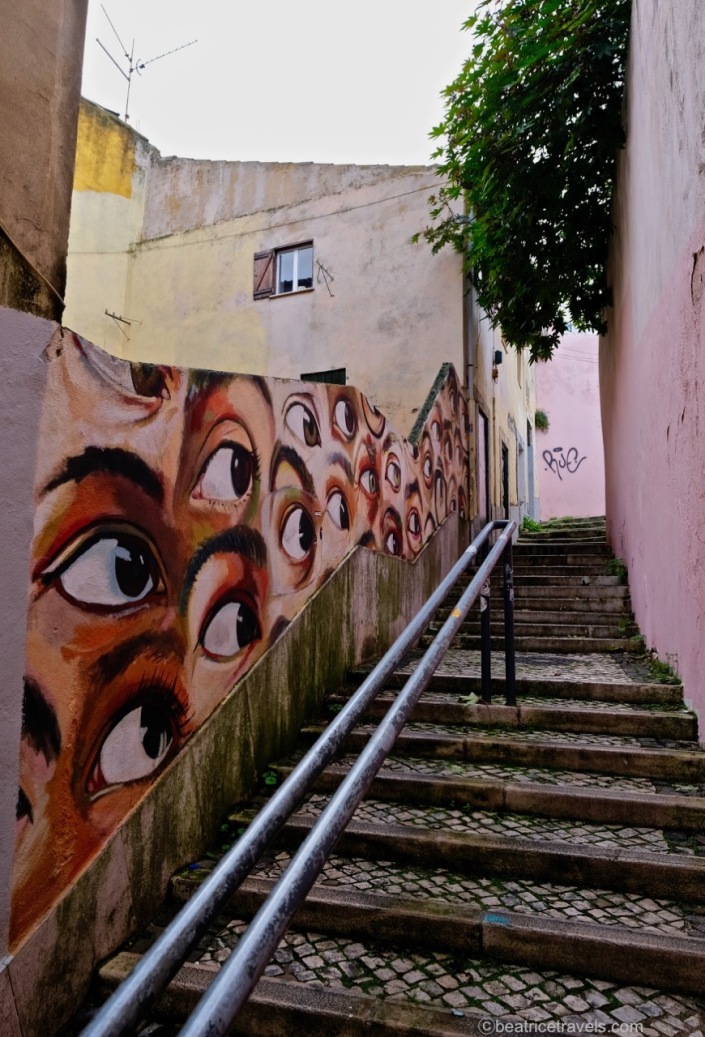 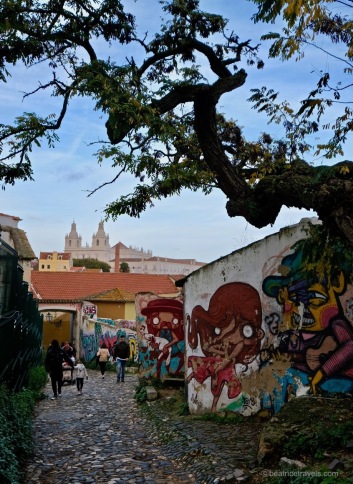 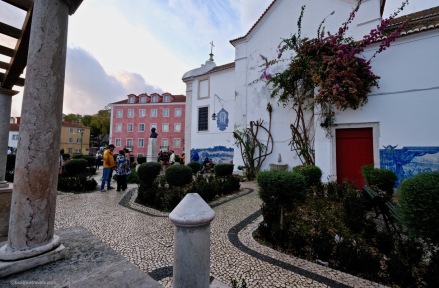 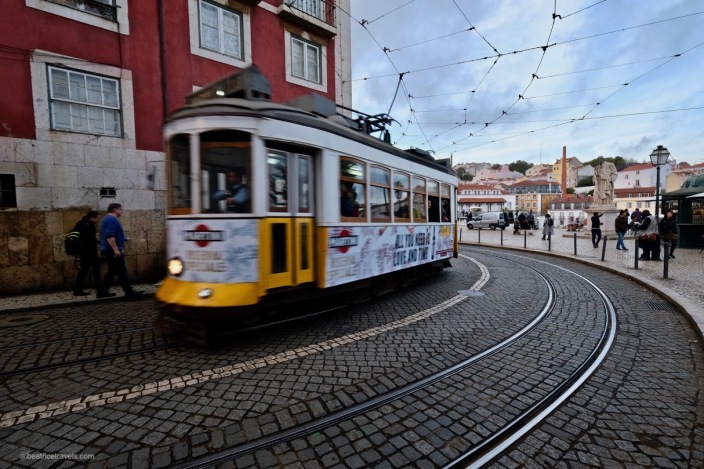 Overlooking Alfama is Castelo de São Jorge which was where the Christian Crusaders defeated the Moors in 1147.  The site of the castle has already been a stronghold since the Iron Age and had been occupied by the Visigoths (5th century), the Moors (9th century), the Crusaders (12th century) and the Portuguese kings and queens (14th to 16th centuries).  After the Great Earthquake of 1755, the castle was severely damaged leaving only the main walls of the fortification standing.  Not until the 1940s was the castle restored to its former magnificence.  There are some engaging museums here but the unparalleled panoramic views of the city are what draws people here. 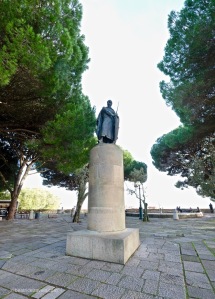 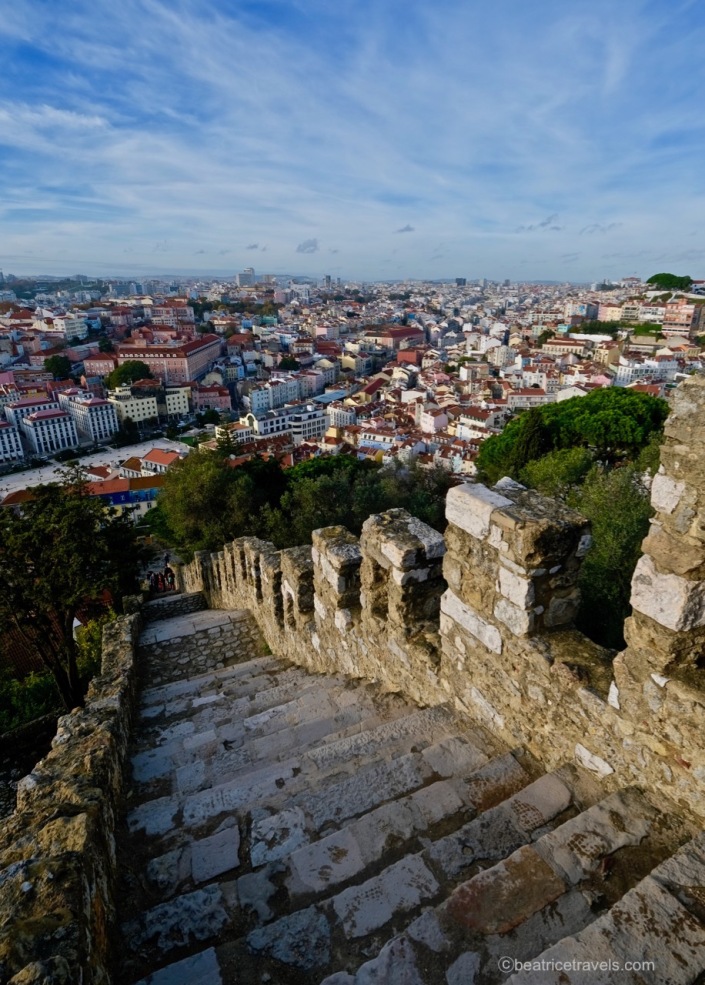 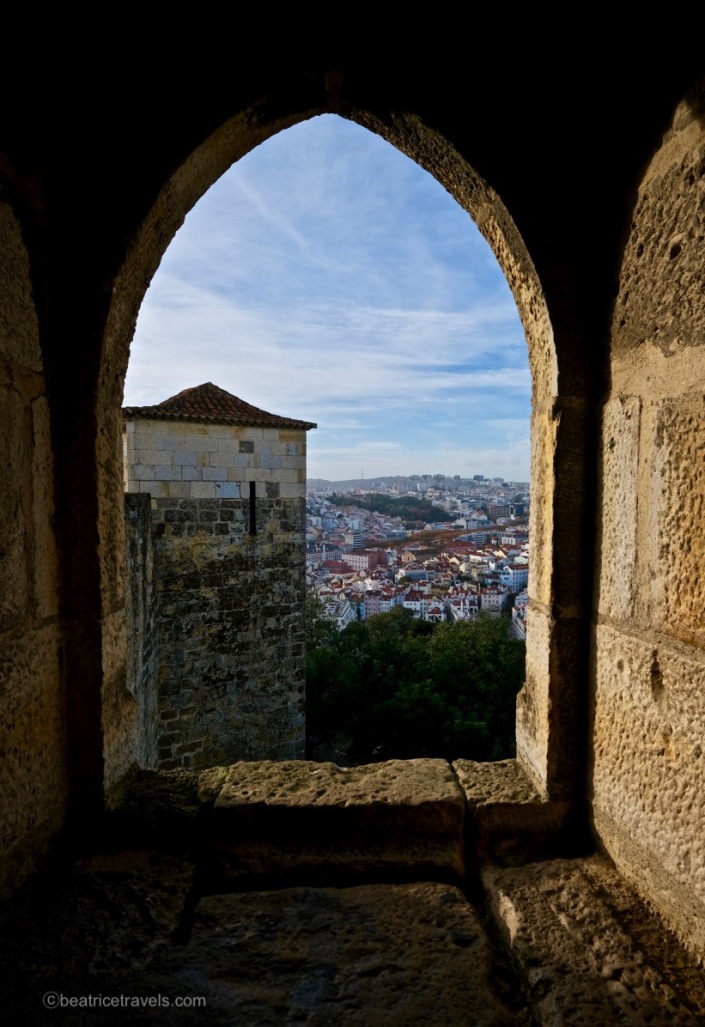 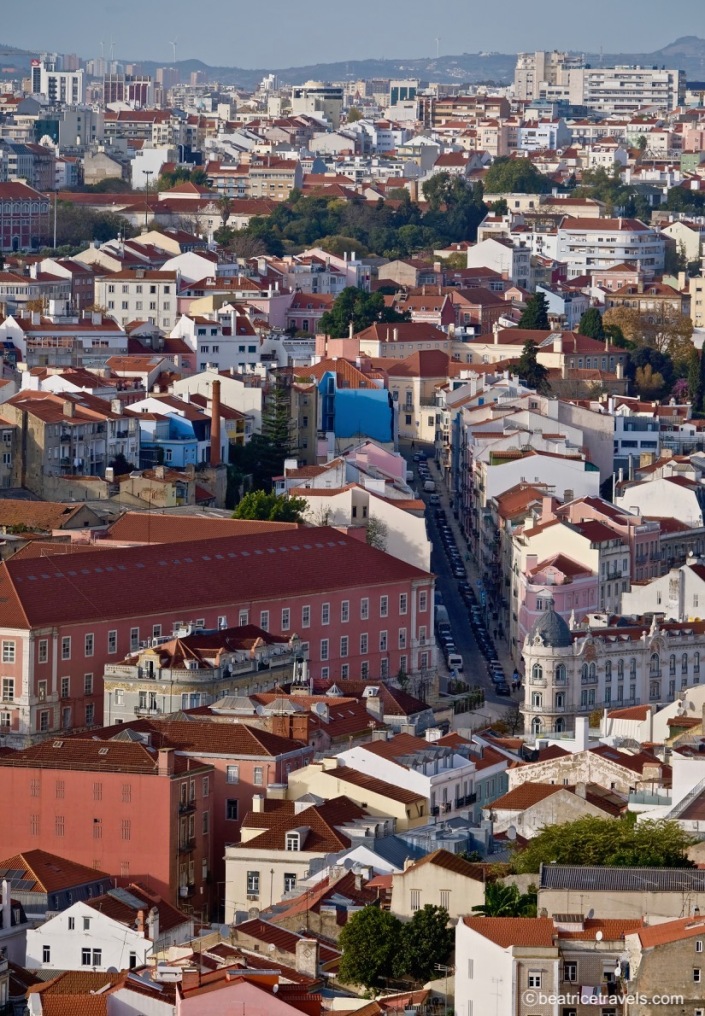 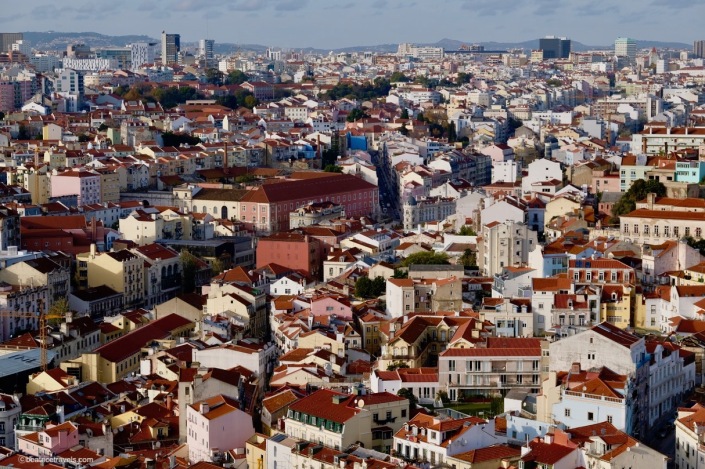 In the next post, I will talk about the area called Belem where the only two UNESCO World Heritage Sites in Lisbon are found: Torre de Belém (Belém Tower) and Mosteriro dos Jerónimos (Jerónimos Monastery).  Stay tuned!